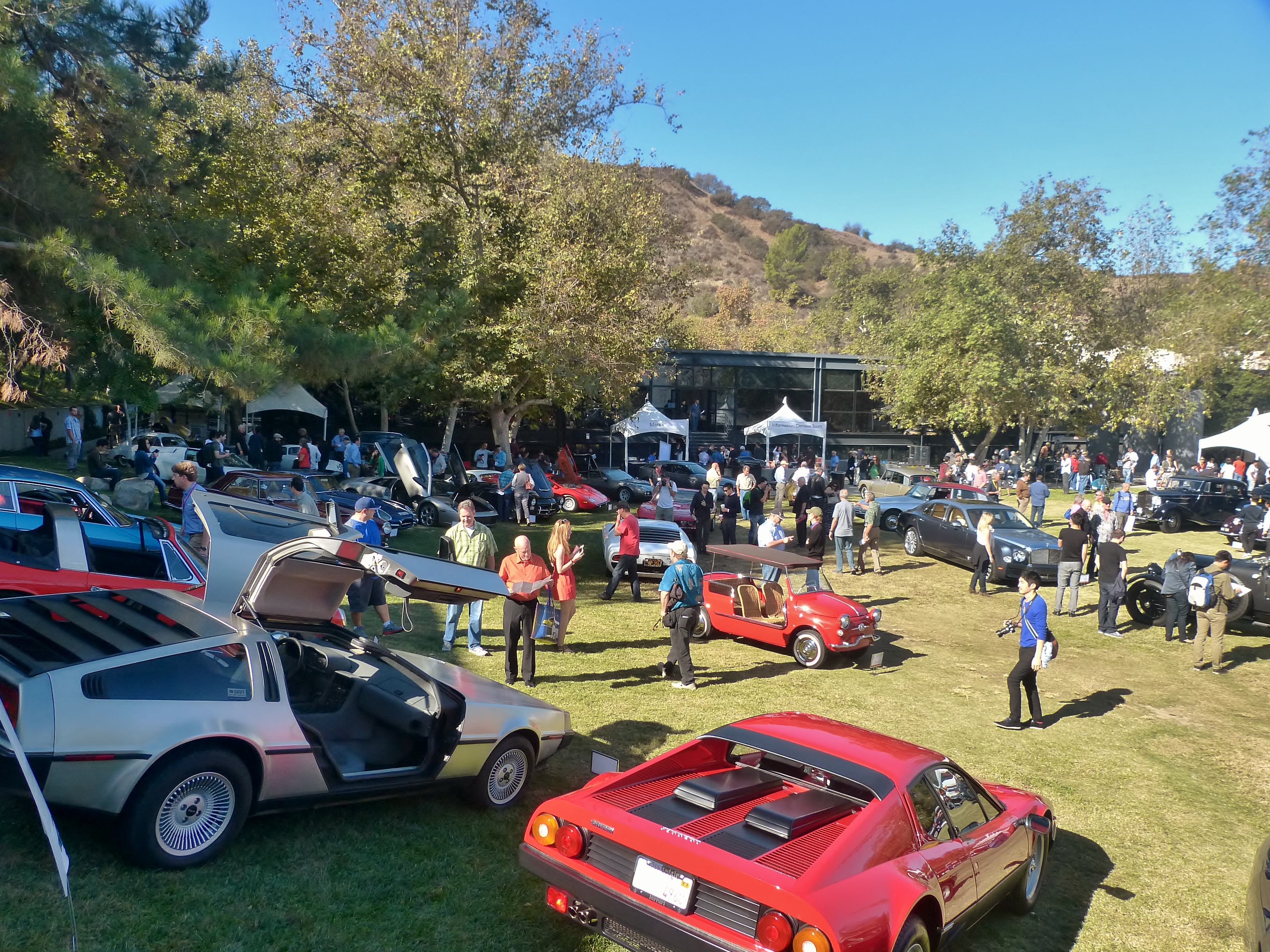 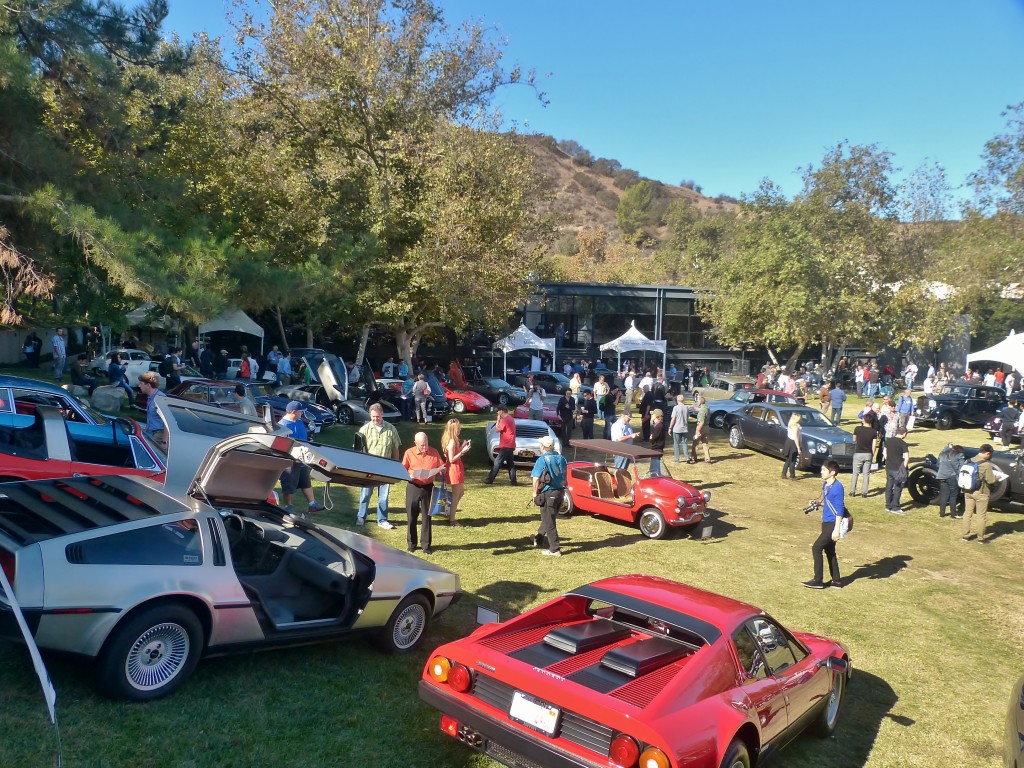 In my life and career, I’ve been lucky enough to attend, and/or participate in the world’s greatest car shows: Pebble Beach, Concorso d’eleganza Villa d’Este, Amelia Island, you name it I’ve likely been or judged there. So I know classic car show greatness when I see it. And Pasadena, California’s annual Art Center Classic is now among ’em. You can learn a lot about Art Center on the school’s own web site and from a dozen other places, so I won’t repeat it all here other than to say this amazing institution has turned out many of the world’s best industrial and transportation designers, so it only makes sense that the school holds a fabulous show.

Heros and friends: the handsome guy at left is my friend and birthday bro Peter Brock, the fat guy in the middle is me, and the woman on the right is Pete’s fabulous wife Gayle; the Brocks were on hand selling and signing their award winning book about the birth and gestation of the 1963 Stingray — Peter should know, he was there as one of the car’s original design team and inspirational figures

This year’s theme was “Inspired by Nature” and among its many great highlights included a worthwhile celebration of the Corvette’s 60th anniversary and the Stingray model’s 50th, and a couple of the gents that worked on those early Corvettes were educated at Art Center, and were on hand at the October, 27, 2013 show. 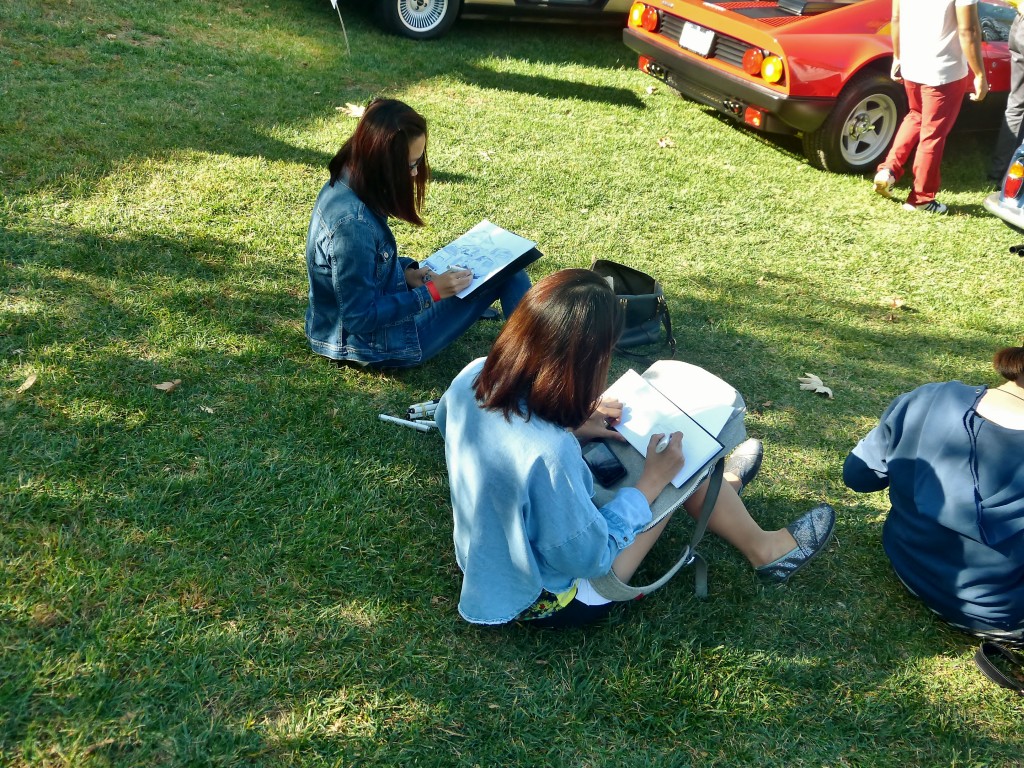 Even though most cars are today born primarily on Computer Aided Design equipment, Art Center still values and teaches old school drafting and sketching. The grounds were dotted with students and other artists illustrating the show on canvas or in their sketchpads – wonderful! 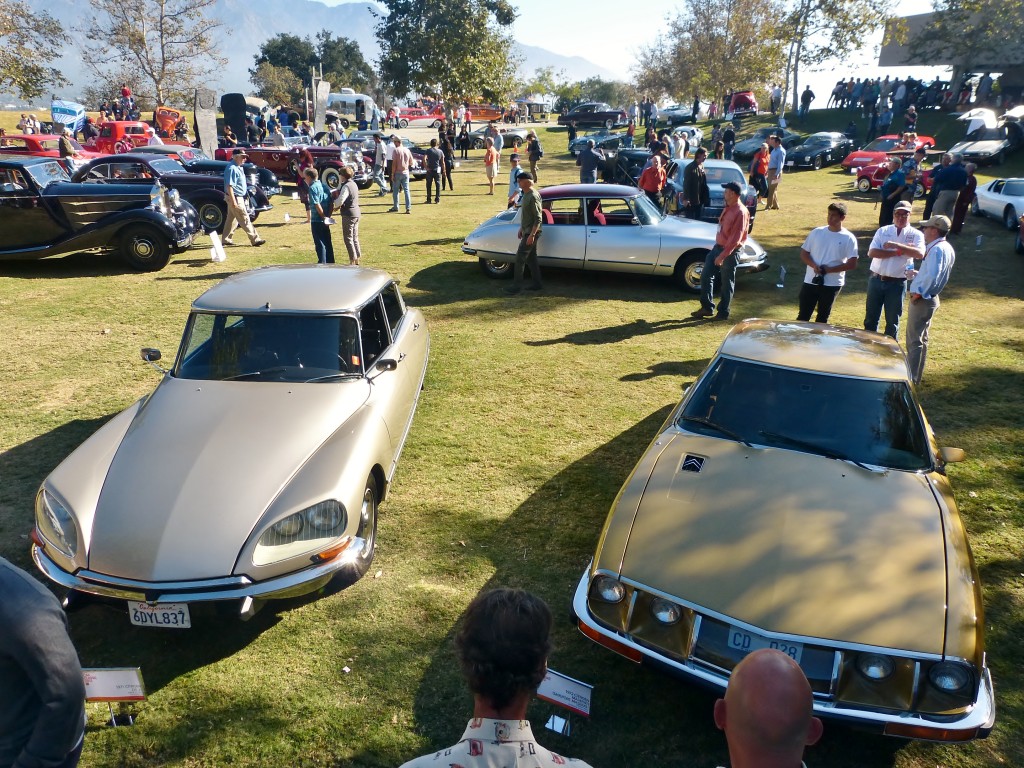 Most designers just love Citroens, and generally, so do I. An all time great and innovative bit of design work, especially the DS and SM models.  The lovely gold SM coupe at lower right of the photo, belongs to Stewart Reed, Art Center’s Transportation department chairman. This car sat for more than 30 years in a nearby Pasadena garage until Stewart rescued it from hibernation, and other than a major service and show quality detail job, it is factory original.

Beyond that, the cars were the stars, so I hope you enjoy them in these wonderful photos by my friend and erstwhile photographer, Kirk Gerbracht. 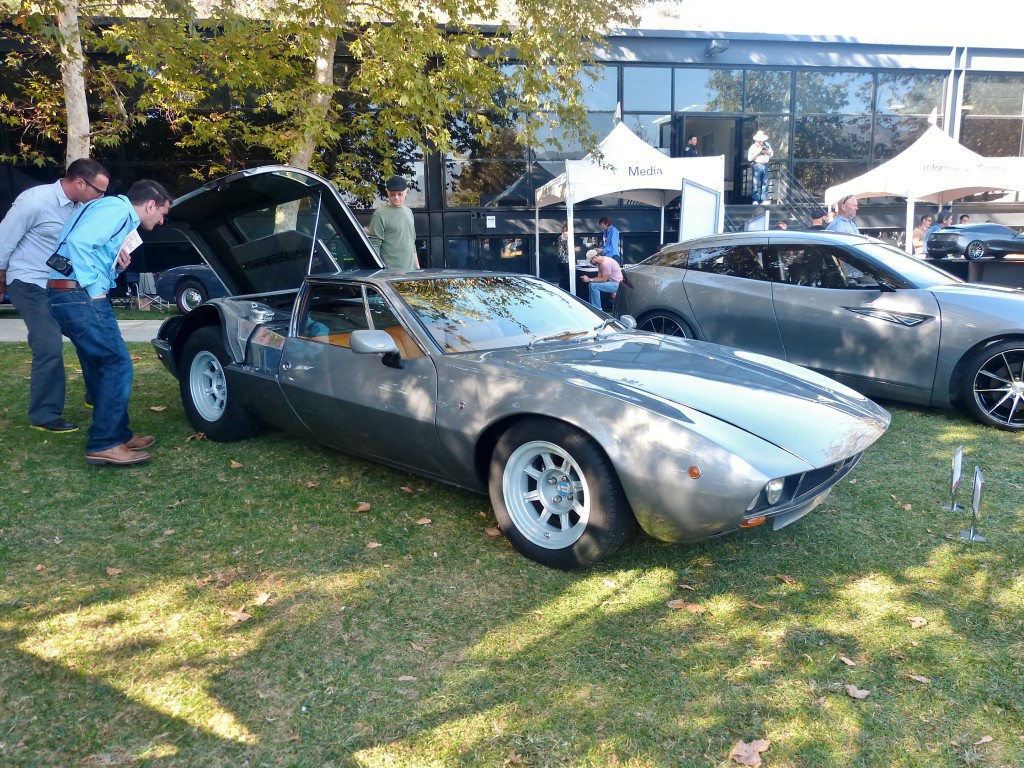 An all time great design if there ever was; the DeTomaso Mangusta, the work of Italian genius Giorgetto Giugiaro during his tenure at Ghia.

Legendary SoCal racer/designer/hot rodder Doane Spencer’s heavily customized ’55 Thunderbird was on hand, and in case you might recognize the blue shirt and mop of gray hair standing just behind it, yes that’s Jay Leno, an Art Center Classic regular attendee and supporter 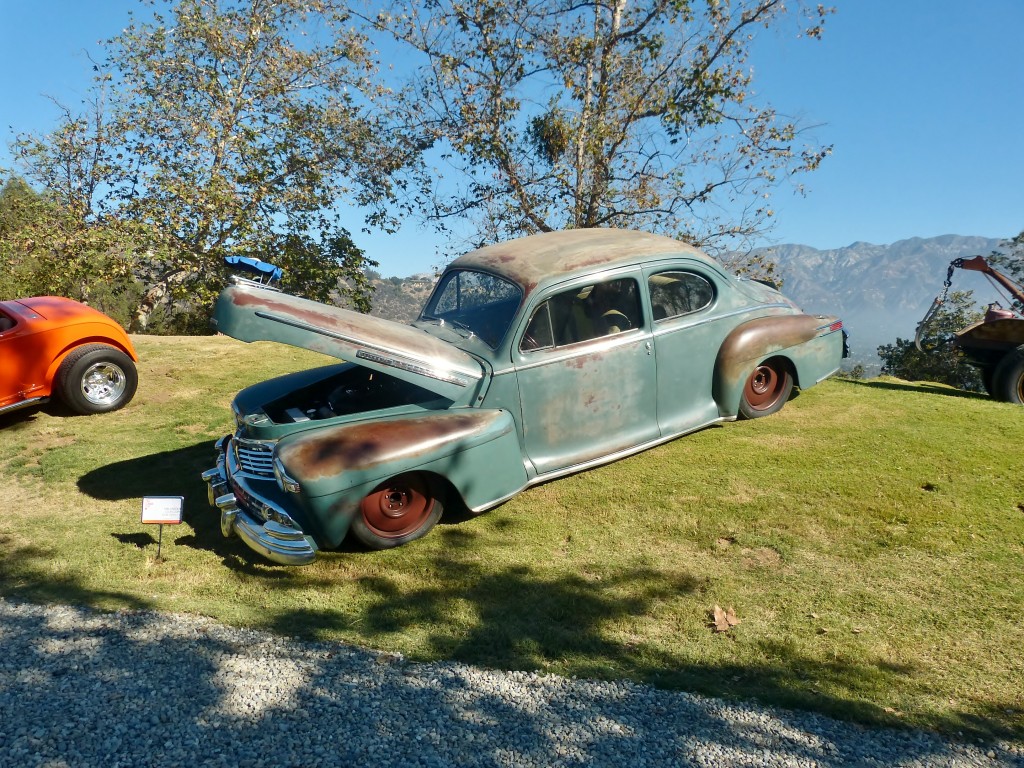 Don’t write this heavily re-engineered ’48 Lincoln off as merely another rat rod, as it rides upon an updated modern chassis, and runs a current gen 5.0-liter Ford “Coyote” V-8 for power 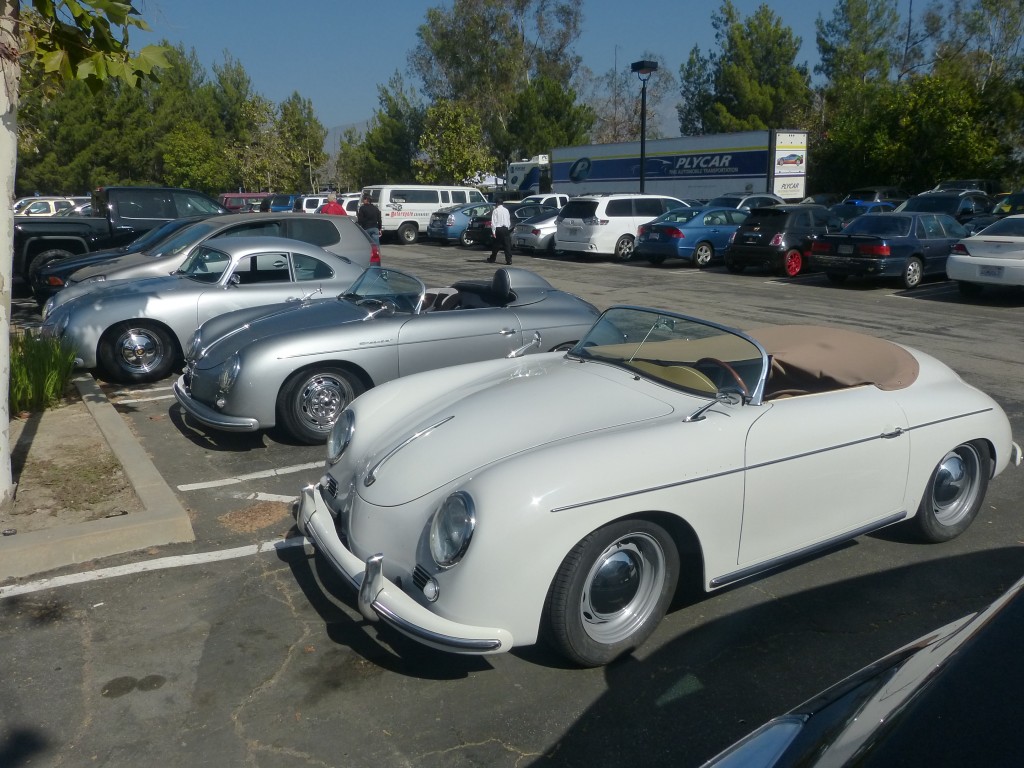 As so often happens at these events, the show out in the parking lot is as good as the one inside the official venue — 356s anyone? 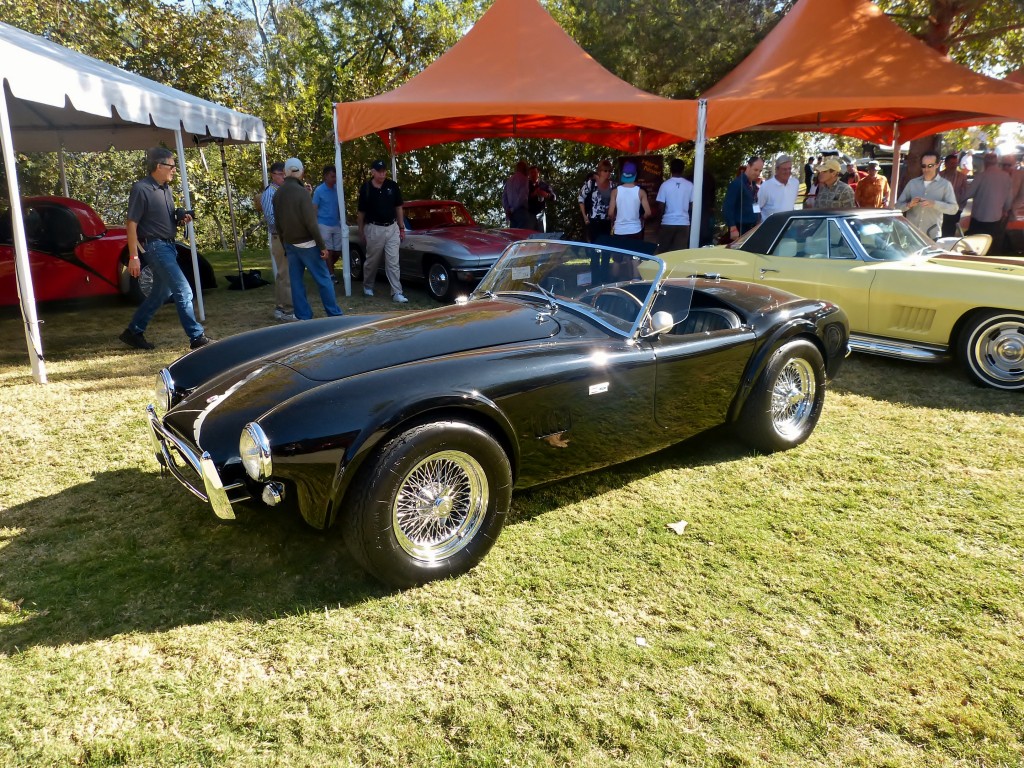 My favorite sportscars everywhere you look, in this case, mid-year Corvettes with a perfect Shelby Cobra 289 in the foreground