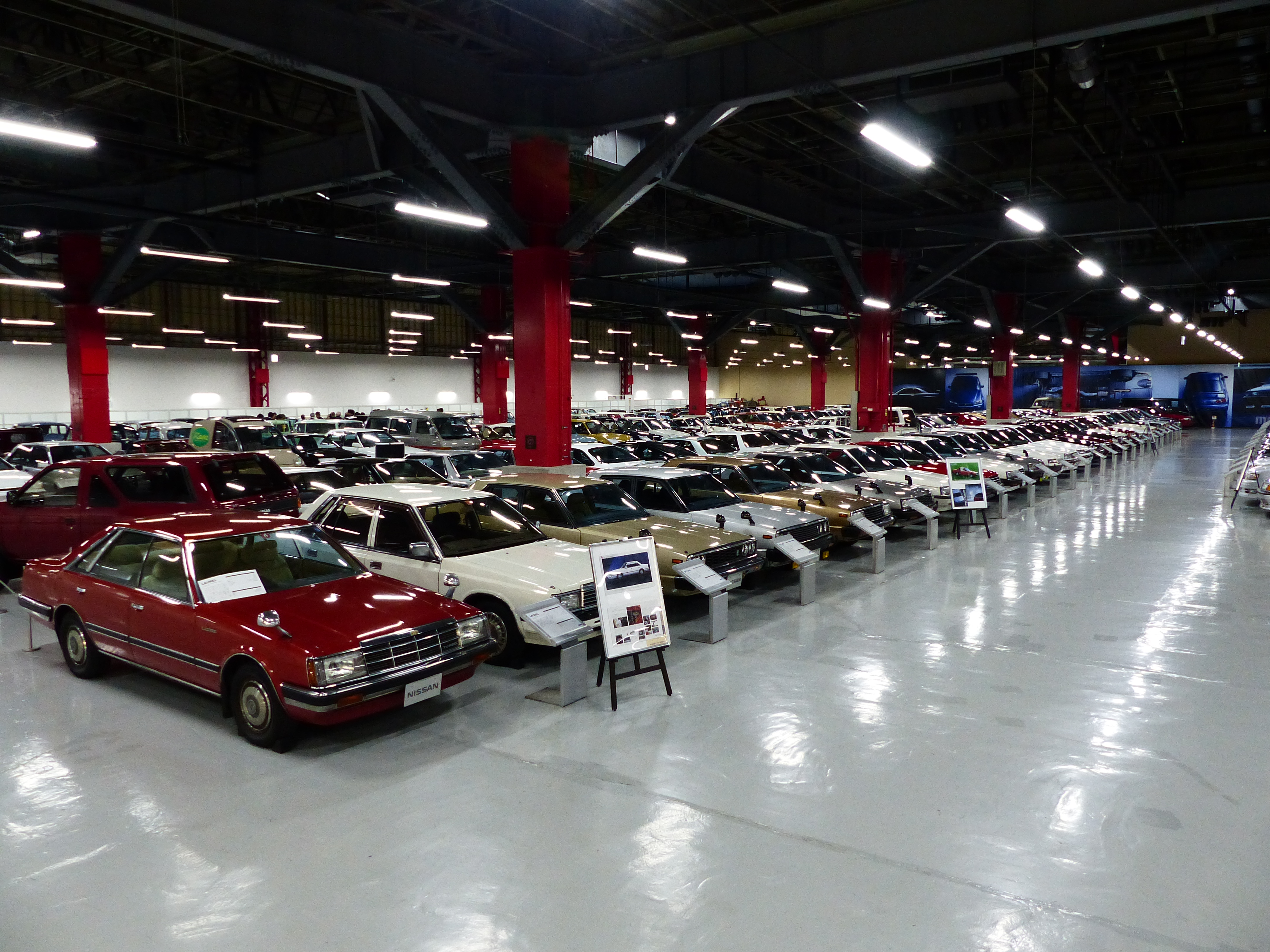 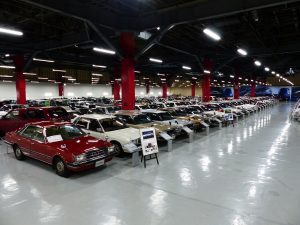 Japan has an automotive history going back a century; not to mention several worthwhile car museums many of which go well beyond only Japanese car

Most people might believe that Japan’s automotive history dates to sometime in the 1960s, because that’s when Datsuns and Toyota Coronas began showing up in those small “Imported Car Dealerships” around nearly every city in the U.S.  Of course this isn’t true, as the history of Japan’s larger carmakers dates back prior to WWII.  And even then, Japan’s enthusiasm for cars extends well beyond its own borders as evidenced by several of this marvelous country’s dedicated car museums.  This is an enthusiast community that loves American Musclecars, sports cars, exotics, and motorsport as much as any other on earth.

Wherever in the world we go, we seek out the automotive epicenters in search of collections, events and museums.  And there are many in Japan which was our destination in the fall of 2018.  We call your attention to these three: 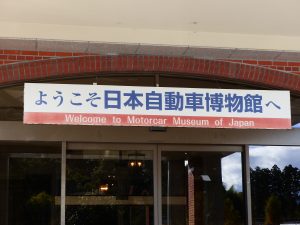 This privately owned car museum was somewhat surprising in that it lives in a small, rural, mostly agricultural community of Komatsu City, Ishikawa, near the city of Kanazawa.  Kanazawa itself is worthy of your visit, an engaging meld of old and new, with a magnificent park and castle complex in its center and beauty everywhere you look.  Another surprising aspect of the MMJ is the building itself, a large, English colonial style structure that looks modestly out of place in Japan, and in the Komatsu countryside.  Inside you’ll find more than 500 cars of all stripe and from around the world.  They are loosely gathered by type and/or country of origin.  One group of cars is called “sports cars city” while another gathers American “land yacht” Lincolns and Cadillacs – very popular in Japan. 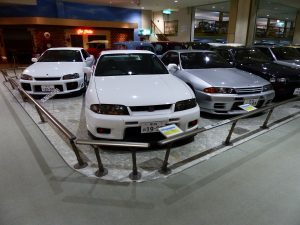 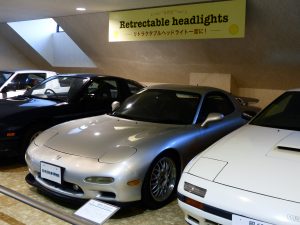 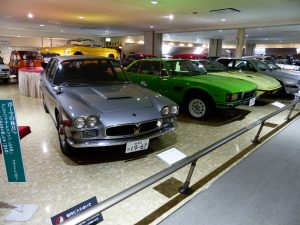 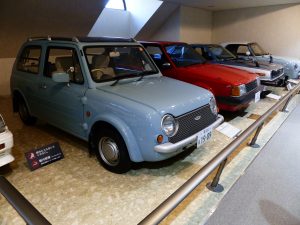 Plus of course countless rows of Japanese and Chinese cars, trucks, and motorcycles – I promise there are brands of cars and bikes here you’ll have never heard of much less seen; some dating to the very earliest days of motorized transportation.  Do not go there expecting dazzling museum craft; there is certainly all sorts of ephemera, photos and other archival items to augment the displays, but the cars are shown in fairly simple rows with just adequate lighting and signage often containing some charming misspellings and grammar goofs – we’re not making fun of their English, as we don’t speak beyond three words of Japanese.  No matter, you go here for the cars, packed and stacked into three large floor levels, thankfully connected via escalators.  There’s also a charming gift shop, but no snack bar or café, so plan on visiting other areas of Komatsu which the staff can direct you to.  While it’s possible to get to this museum via buses, and trains, it’s not particularly easy; the best way is to base yourself in Kanazawa for a day or two, then rent a car with a nav system and drive there; it’s neither far nor particularly difficult.  Admission is very inexpensive, and you’ll enjoy what you see. 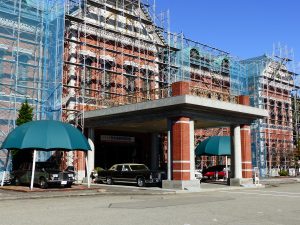 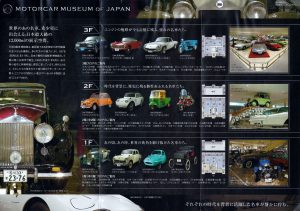 The Nissan Heritage Collection is much what it sounds like: Nissan’s in-house museum collection of its own production heritage.  Although essentially private it is open to the public certain days per week (which are listed on the website).  The Heritage Collection lives at Nissan’s Zama Operations Center, a sprawling engineering and tech center today focused around electric car and battery production and development.  Zama is proximous to Tokyo, about a two hour drive outside of the city center.  And absolutely worth the trip. 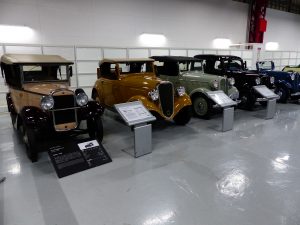 The building blocks of Nissan date back to 1911; when you add in the Nissan, Infiniti and Prince brands, plus decades of motorsport activity, there’s a lot to look at.  The collection is housed and maintained in a massive single level former factory building that must spread several acres.  Hundreds of cars are on display, and when you round a corner, just past the entry hall, into the “big room” you’ll gasp at the depth and breadth of the collection.  The collection contains something like 80% of all models produced, and for some of the earliest nameplates, which the collection doesn’t own, there are accurate scale models.  The rows of cars are perfectly aligned and stretch for hundreds of feet, although occasionally you’ll stumble on a blank spot representing a car that is likely out on loan to another museum or for use in an auto show.  Many of the cars are unrestored, well preserved original examples; a few here and there assuredly need restoration, while some have been redone to high standard.  Japanese industry is often noted for copying the work, designs, and products of other countries, not by all means a bad thing.  Cruise the rows of 1930s era Datsuns, and you’ll see strong hints of Ford Model A.  Several 50s cars mildly resemble this Chrysler, Ford or Caddy.  You’ll see very early prototypes and limited production examples of what we know as the original Datsun 240Z and 510, plus 1600 and 2000 Roadsters.  Along with the genesis and lineology of the various hot Skyline models – truly Godzilla heaven. 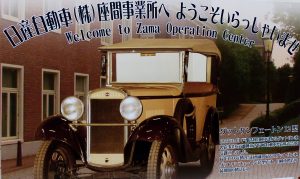 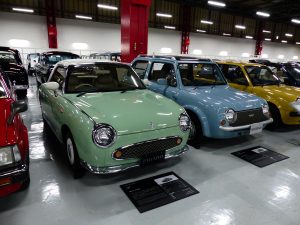 Nissan/Datsun has long valued its incredible history, and began assembling the collection in 1954 with a single car, that being a 1934 Datsun Model 12.  We can only guess that the inimitable Yutaka Katayama, one of Datsun/Nissan’s most switched on enthusiast executives to ever run the company, would be very proud of what his corporate descendants have gathered here. 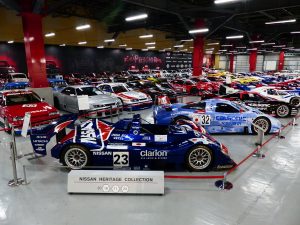 Motorsports wing takes your breath away 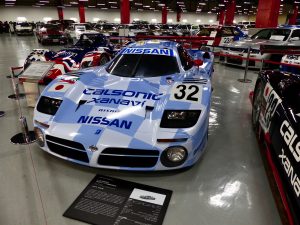 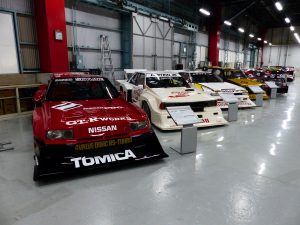 What’ll really take your breath away is the motorsport wing of the collection.  From very early Datsun rally cars (many smartly displayed in battleworn, unrestored condition) to the latest GT-R racers, this part of the collection is extensive.  There are privately built, small team cars, IMSA GTP prototype era racers, plus factory Le Mans competitors.  Most of them run, and are fastidiously maintained by an in house team of engineers, techs, and mechanics, as the cars are often loaned out and used for vintage racing exhibitions and such.  Some of the people that fettle these cars were part of the crews that built them originally. 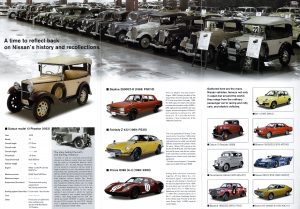 Again you could likely visit the Collection via subways, buses, trains, and taxis, but the easiest and most direct route is to rent a car with a nav system in Tokyo and drive there. 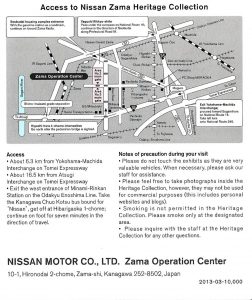 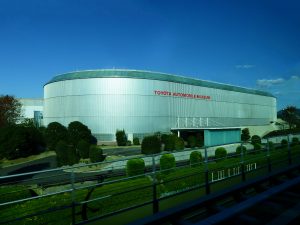 It would be easy to make several misassumptions about an institution named the Toyota Automobile Museum.  First you might assume it contains only Toyotas, which would be a big fat Wrong.  Additionally, you might guess it to be a dark dusty warehouse full of old cars.  Equally Wrong.  This fabulous purpose built property near to Nagoya, Japan, is dedicated to the entire history (from many countries) of the automobile, beginning of course with a Benz Patent-Motorenwagen of 1885, widely regarded as the first legitimate combustion fired automobile for which creator Karl Benz was awarded a patent, hence the vehicle’s name.  The building is a magnificent piece of architecture, somewhat oval in shape, or perhaps representing a huge, landbound blimp.  It’s highly avant garde outside, and modern, elegant and sleek inside.  It opened in 1989 at the celebration of Toyota Motor Corporation’s  50th anniversary.  The spaces are expansive, and in some cases sweeping, everything finished in polished metal, red and black livery.  At any given time, it showcases at minimum 140 vehicles from around the world and up and down the automotive scale.  Most of the vehicles displayed belong to the Museum’s collection, others are loaned from other institutions and collectors.  No matter, the museum craft is absolutely world class, very much on par with our own Petersen Automotive Museum, New York’s Museum of Modern Art or the Guggenheim.  The entire facility was remodeled and freshened during 2016/17 so it just sparkles. 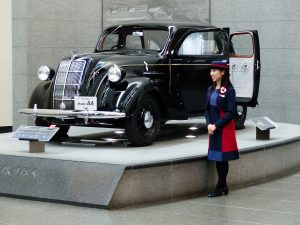 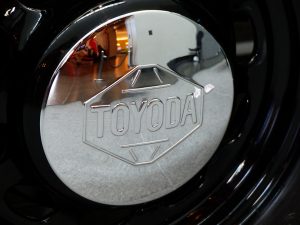 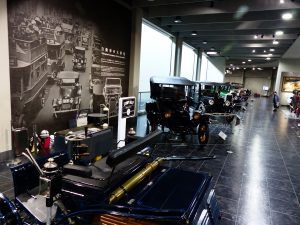 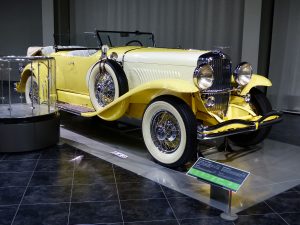 No automotive stone is left unturned; from the Art Deco eras to the fabulous fins of the 50, the earliest Toyotas to Mercedes gullwings, Ferraris and American musclecars.  As you might expect, there are several fabulous Toyota 2000GTs on display, and every head surely bows a bit to the west when coming upon one of the two 2000GT roadsters custom built for the 1967 James Bond film You Only Live Twice, starring Sean Connery, and filmed almost exclusively in Japan.  Something this Museum has done to further accommodate those who really want to get up close and personal with some of the cars is to install staircased observation platforms (perhaps ten feet tall) allowing guests to step up and overlook some of the cars’ interiors or engine compartments.  The signage and video displays are excellent.  There are one-offs, concepts, presidential cars, musclecars, prototypes and racing cars from every era and country you could name.  Many of the exhibits are staffed by immaculately uniformed attendants who are happy to answer your questions in a variety of languages.  Also a bit whimsical is the “Back Yard” room, used to house vehicles not currently on main display.  It’s a back yard any of us would love to have. 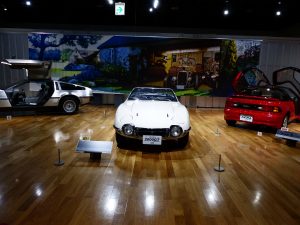 You only Live Twice, or so they say… 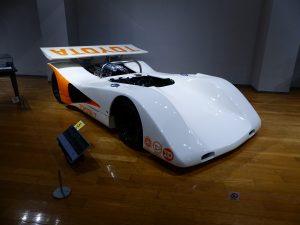 There’s also a special play area for younger kids, a comfortable, reasonably priced café, and an exceptionally well stocked high quality gift and book shop on property to complete your experience.  Every inch of the grounds are well landscaped, and polished.  No need for a rental car for this one, as there’s a train stop quite literally across the street.  From the Nagoya Station take the Tobu-Kyuryo/Linimo line to the Beidai-dori-eki stop which is clearly marked for the Toyota Hakubutsukan-mae (museum) stop, take the elevator to street level and cross to the museum entrance – the massive building is visible before the train stop and you can’t miss it.  The facility is open most days, (admission is a bargain especially with a AAA discount) and also hosts a variety of automotive events; no reservations are required to visit, but check on the website to avoid any blackout dates. 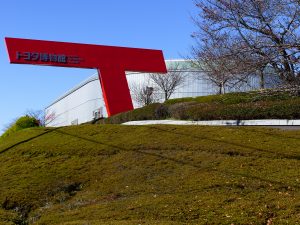 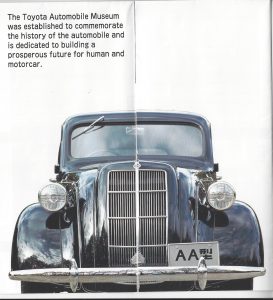