Remember, you can double-click on any photo to blow it up full screen.  Thanks…

Yes, Brits in the Ozarks is really A Thing. 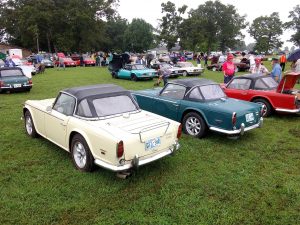 Something British for everyone here, including one of the best lineups of TR4s and TR250s I’ve seen anywhere.

In fact, it’s a great thing. Believe it or not, automotive enthusiasm in Arkansas, and many of its surrounding states, extends well beyond pickup trucks, tractors, and musclecars as you may (incorrectly) assume.  Brits in the Ozarks is a car show, and in fact a fun and worthy weekend of automotively flavored events surrounding British iron. 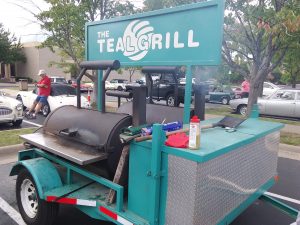 Every good car event should begin with a parking lot welcome party. As did this one. And just to remind you: BBQ is the food, and the thing you cook it on is a grill. So don’t be confusing a grill with BBQ (the latter of which there is a stuff not a thing) 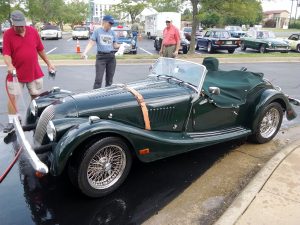 Doesn’t a Morgan Plus 8 look just Perfect in British Racing Green?  The woman behind her car wearing the blue hat and jeans is among the most engaging people I met and interacted with ar Brits in the Ozarks. her name is Beth and it was my pleasure to help her wash her car after a long road trip. “This Girl Got Game” let me tell you as she drove this car, by herself, from her previous home In Oklahoma to the event in Arkansas, with immediate post show plans to drive it to her new home in Virginia. Her husband also has a Morgan, and they are awaiting their arrival of a new 3-wheeled Morgan. And they ride motorcycles together too.  Like I said; “Game!”

Held over September 6-9, and presented by the British Iron Touring Club of NorthWest Arkansas, this Brit car and bike festival presented a pair of road tours, a great pre show parking lot grill out, an excellent one day show on Saturday, and a fun evening wrap up and awards presentation dinner.  It was my particular honor to serve as guest speaker that night; more importantly the event benefits the Arkansas Chapter of the ALS (Lou Gehrig’s Disease) Foundation and to date, in its 17 or so years, has donated more than $150.000 to this importantly local charity. 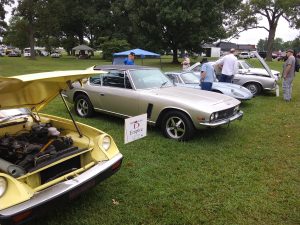 Howz this for a cool lineup. Jensen-Healey, Jensen Intercepter III. Marcos GT, Gordon Keeble, and a Triumph Stag. Rare and interesting stuff. This group alone made it worth the trip

This year’s Brits in the Ozarks events drew, by best estimation, cars and people from ten states.  Tornados brewing farther South and East kept a few planned attendees away, and dampened the weather a bit.  But still the field was full with more than 150 cars and bikes; the venue was a large well developed park near Springfield, AR, not far from the university, and the corporate home of WalMart.  Misting mornings and the occasional rain spit did little to dampen the enthusiasm of these wonderful and friendly enthusiasts.

Howz this for a cool lineup. Jensen-Healey, Jensen Intercepter III. Marcos GT, Gordon Keeble, and a Triumph Stag?  Rare and interesting stuff. This group alone made it worth the trip 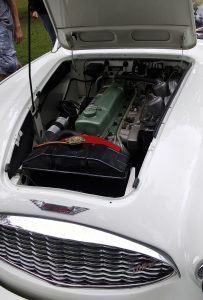 This Austin-Healey 100-6 really caught my attention as its the same model my father bought new in 1958…and soon had to sell because my mother became pregnant with me. Sorry Dad… 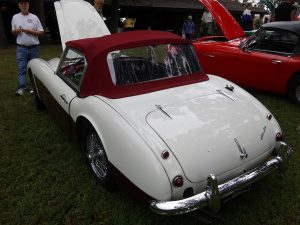 Same 100-6, just one of a great row of high quality Big Healeys on show that day.

The field was engaging and ran the gamut from nice every day level driver cars to the truly rare and exceptional.  One of the great joys of this event is that most of the cars, even several from many states away, drove to and from the event, sometimes thousands of miles. 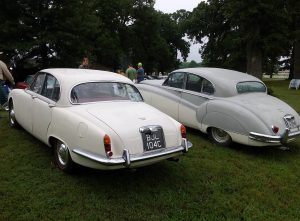 Jags? Of course, plenty and varied. Love these two old soldiers, with a right hand drive 3.8 S saloon at left, and an elegant Mk VII on right. Both cars with Grace, Space, and Pace 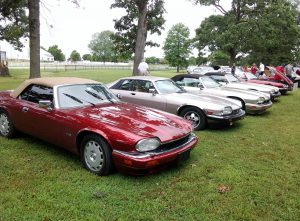 The Jaguar XJ-S’s time as a fully front line collectible has come, and this show presented a top notch gathering of them. Remember that the XJ-S is among the last cars to be designed and produced under the stewardship of company founder Sir William Lyons, and also one of the last models to offer the V-12 engine. I love them and suggest that you should too — a well sorted, later example is a joy to drive

Judging was strictly by popular vote from among the entrants, with first and second places awarded in each class, plus some special awards.  My heart and heartfelt thanks goes out to everyone involved with this pearl of an event, for the great work they do for ALS, for the great fun they have at this show, their enthusiasm for their British cars and bikes, and the genuine warmth and welcome they showed me.  I had an absolute blast at this event, would send anyone there, and I plan to go again.

I have long believed that (at least) four things are the underpinnings of our hobby; they being — run what you brung bracket drag racing, Saturday cruise nights, a Sunday drive perhaps with like-minded friends — in your classic car, and car shows in the park.  And Brits in the Ozarks 2018 proved the latter to be spot on.

Unfortunately, the group doesn’t really have a website for this show, but you can keep up with the club and its events on FaceBook (link just below).  And if you love true Brits, and delightful automotive events and people, you may consider planning a future September’s vacation in the Ozarks of Arkansas: https://www.facebook.com/britishironnwa/ 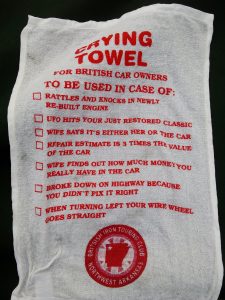 One of the best ever entrant Goodie Bag giveaways I’ve ever seen. Double click on the photo to blow it up so you can read it, and enjoy the cleverness of it, and if you’ve ever owned an old British car, you’ll get it…