Welcome to Goldfield; Everywhere I Look There Are Cars 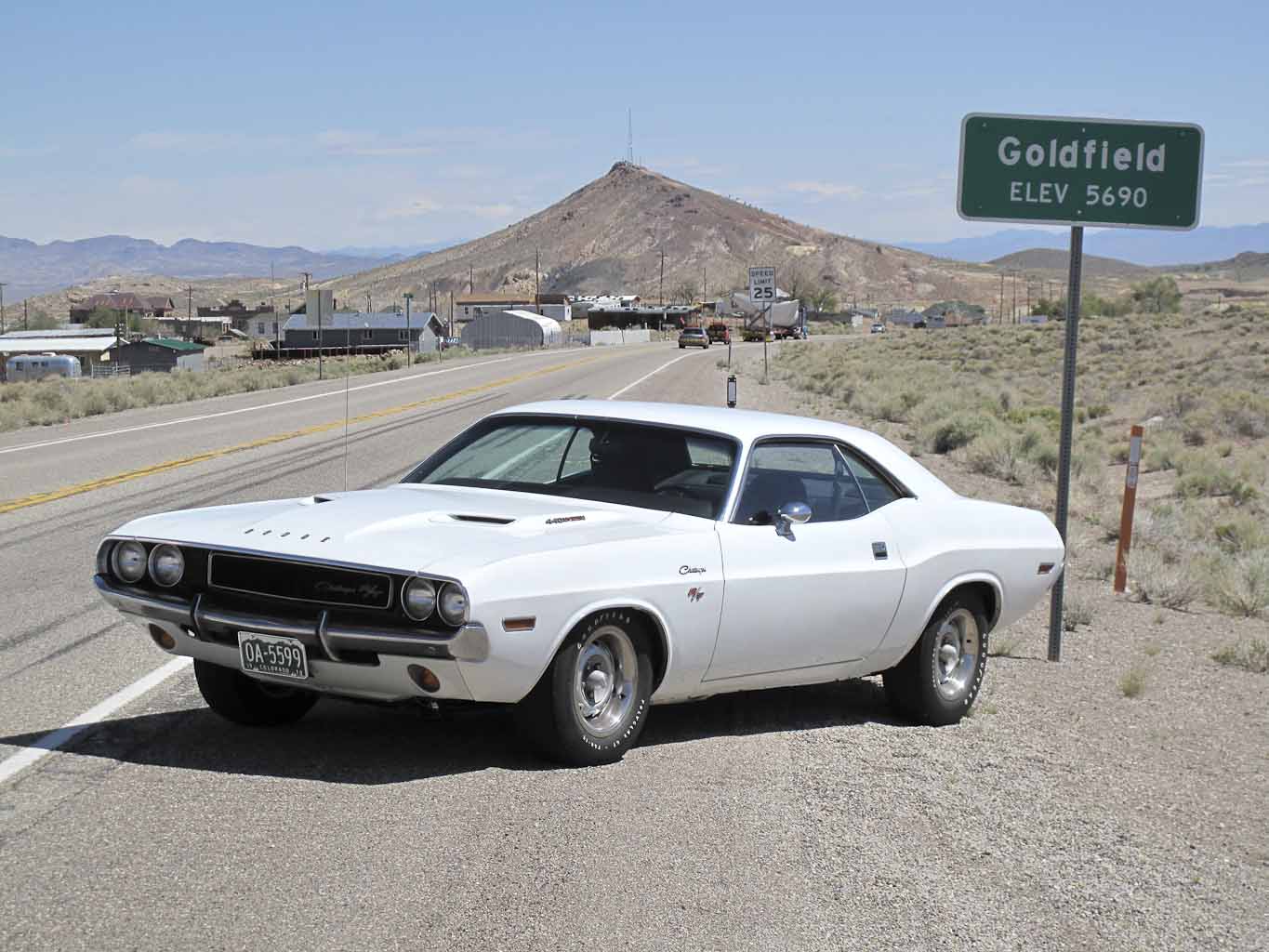 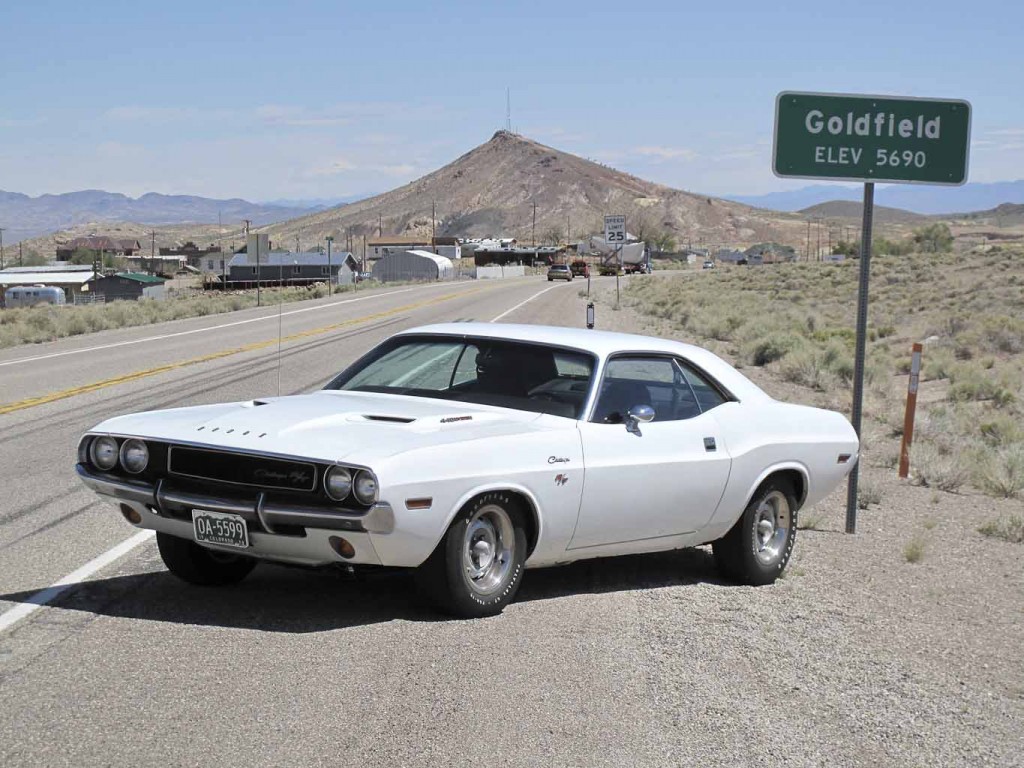 If you haven't seen "Vanishing Point," rent it and all this will make sense.

If you spend 25 or so years, as I have, doing car magazine road tests and feature stories, you’ll eventually end up pottering around dusty old desert mining towns. As I have. 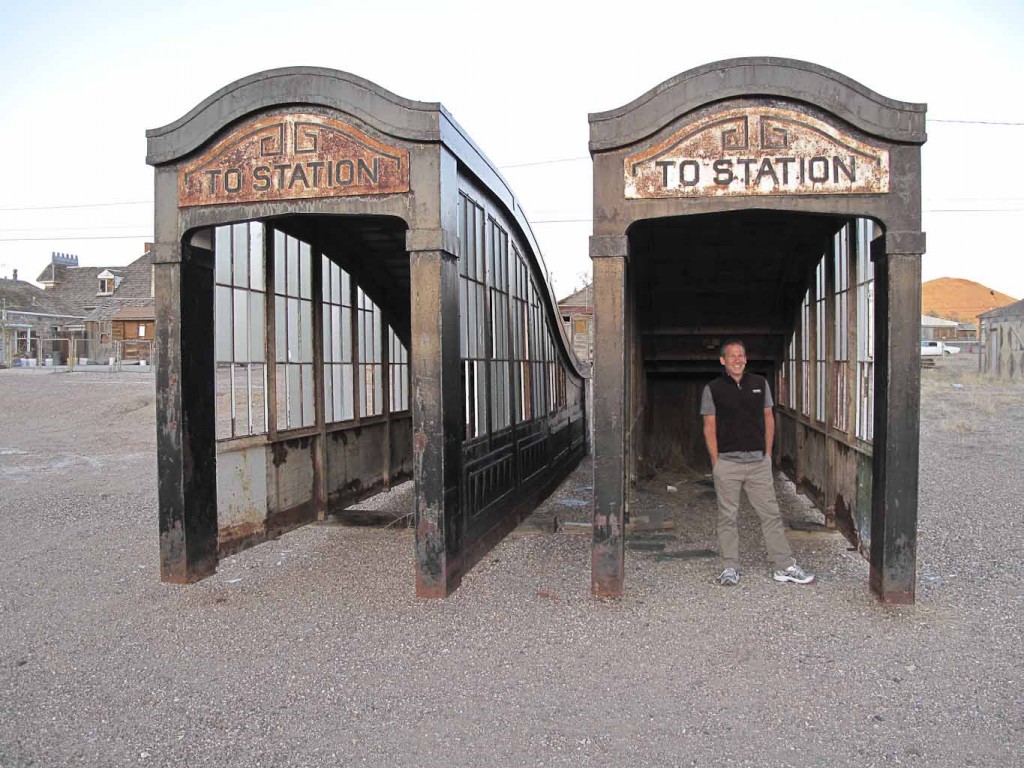 How these vintage subway station entries ended up in Goldfield, I have no idea. That's my friend and photographer Evan Klein on the right.

I love these places; by now most have seen better days — as you likely know, the Western United States’ mining rush was a long time ago. These places are wonderful; filled with history, artifacts, interesting geography, and piles of stuff everywhere. That stuff often includes cars and car stuff. One of my recently discovered new favorites is Goldfield, Nevada. I went there a few years ago for an article about a Dodge Challenger R/T, one very much like the one Kowalski drove in the movie “Vanshing Point.” If you haven’t seen this mid-70s cult classic, dial in to stream it this weekend, or put it in your Netflix cue. It’s a wonderful bit of kitsch, starring a young and handsome Barry Newman. Blue eyed blonde haired Newman was working his way through B-Movieland as a somewhat Steve McQueen-esque actor although he didn’t move the meter in any way like McQueen did. 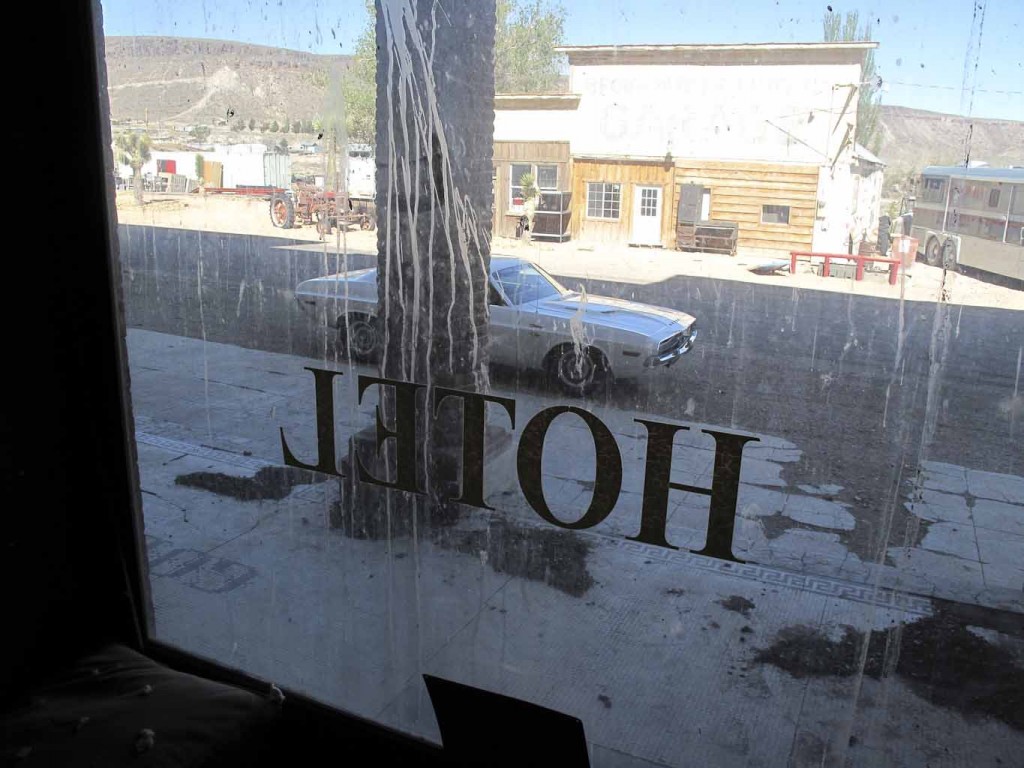 As I recall, you never see the Challenger from inside the hotel in the movie during the riot scene, but the metaphors are too similar to pass up

No matter, Newman is a solid enough actor, and did a fine job in “Vanishing Point.” Not that much of “Point” was filmed in Goldfield, but one very major scene was, and that was good enough reason for us to visit there when photographing and driving this wonderful Challenger 440 Magnum. Goldfield was just what its name suggests, that being a booming to busting gold mining town during the mining rush and into the early 1900s. It sits 100 or so miles Southeast of Reno, just east of the California/Nevada border, and along the eastern foothills of the Sierra Nevada mountains. Today it’s a super sleepy place dotted with ramshackle housing, several historic buildings, one main street, junked out and abandoned cars everywhere, and a 125 or so “characters” making up the population. A little strange – oh yah. Good fun? For sure. 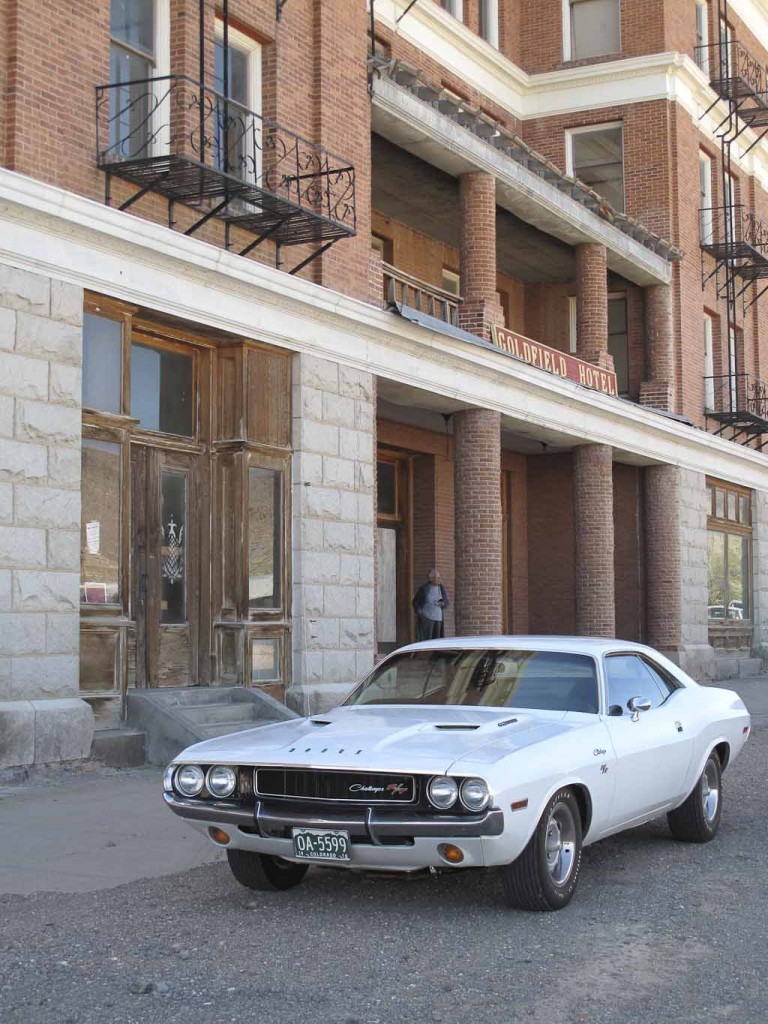 The movie scene was filmed at The Goldfield Hotel, what was certainly an elegant, wonderful place in its prime; it’s now abandoned, although the structure is still fabulous and occupied by an active and vocal ghost community. The little old local lady who showed us around the hotel had a Geiger Counter sort of device that registered the ghosts’ proximity and activity while we were there. I only wish I’d invented this machine; the top models of which sell for hundreds of dollars — my new retirement plan! 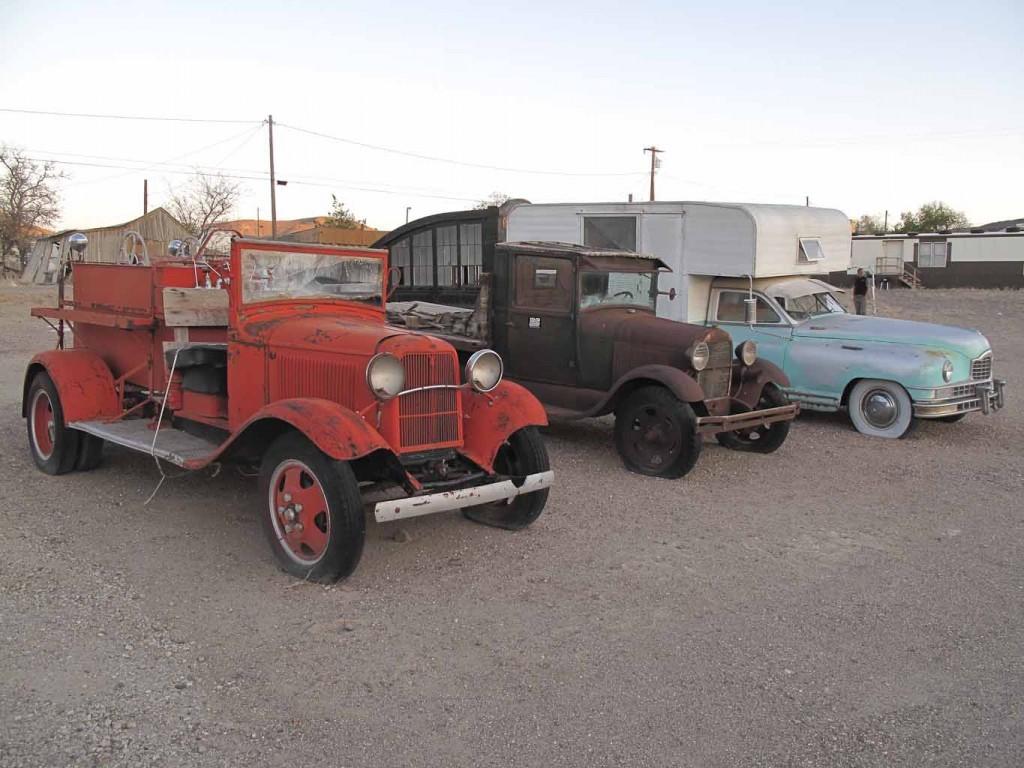 These old towns are usually just crawling with cool old cars, as is Goldfield. While you might have visions of people chasing after you with rabid dogs and shotguns, it has been my experience that if you just want to root around and look at the cars, they usually don’t care, as long as you don’t aggressively trespass or try to steal anything.

These photos tell the rest of the story – I hope you enjoy them. 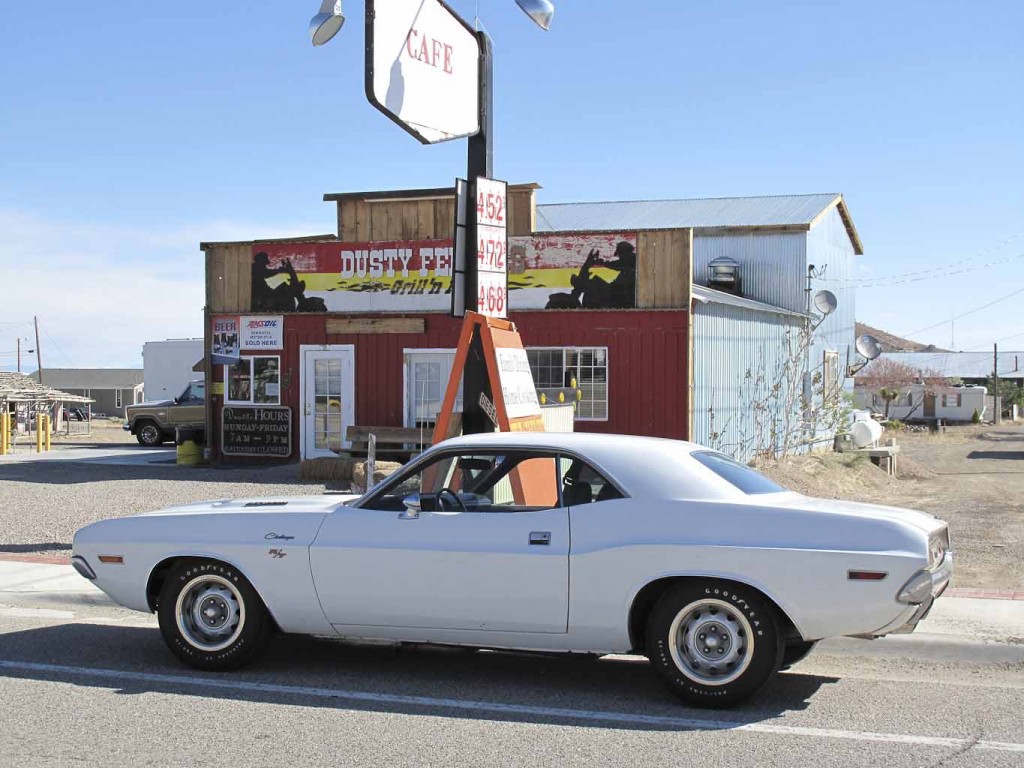 The only place we ate was at the Dusty Fender -- really good food and nice local storytelling too-- and the only gas station in town -- "cash only" please! 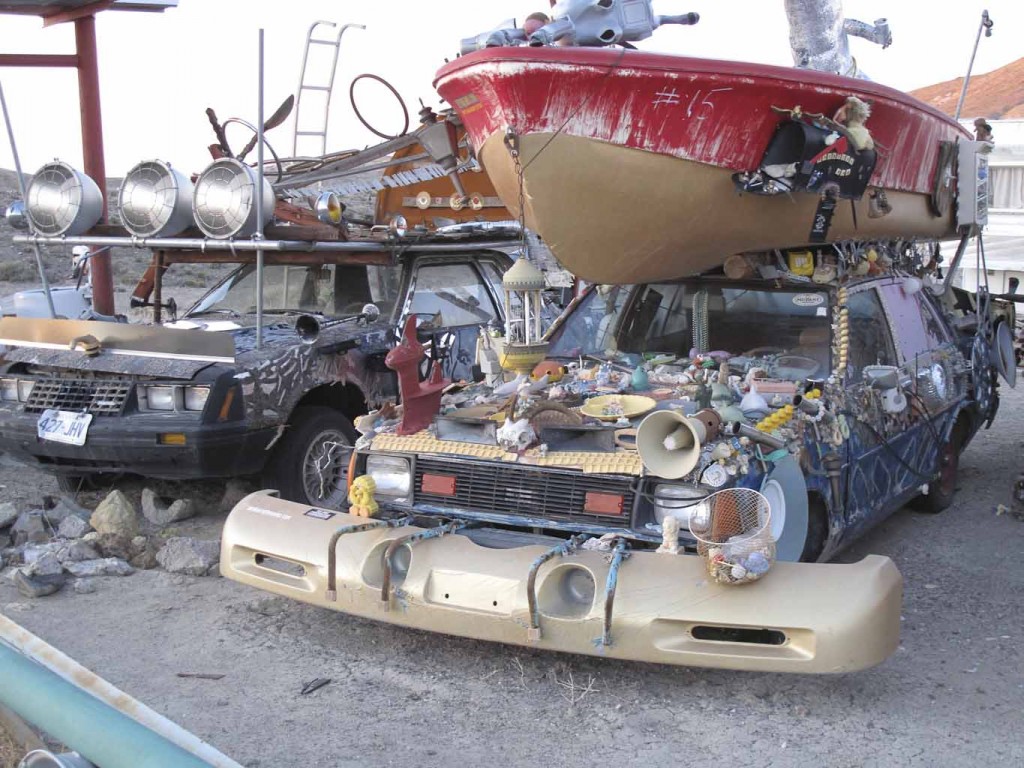 Naturally the local wrecking yard provided the most interesting automotive and visual creations - yes that's a Nissan with a boat on top. 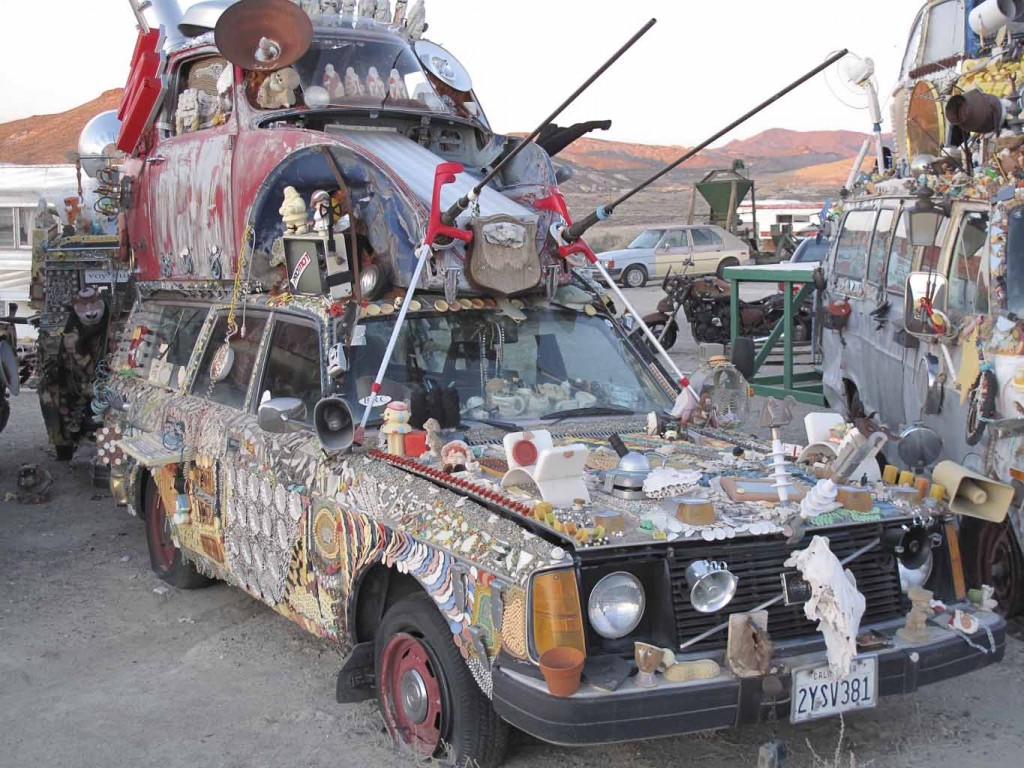 another visual gem from the junkyard

In case you've ever wondered where all those pennies went to... 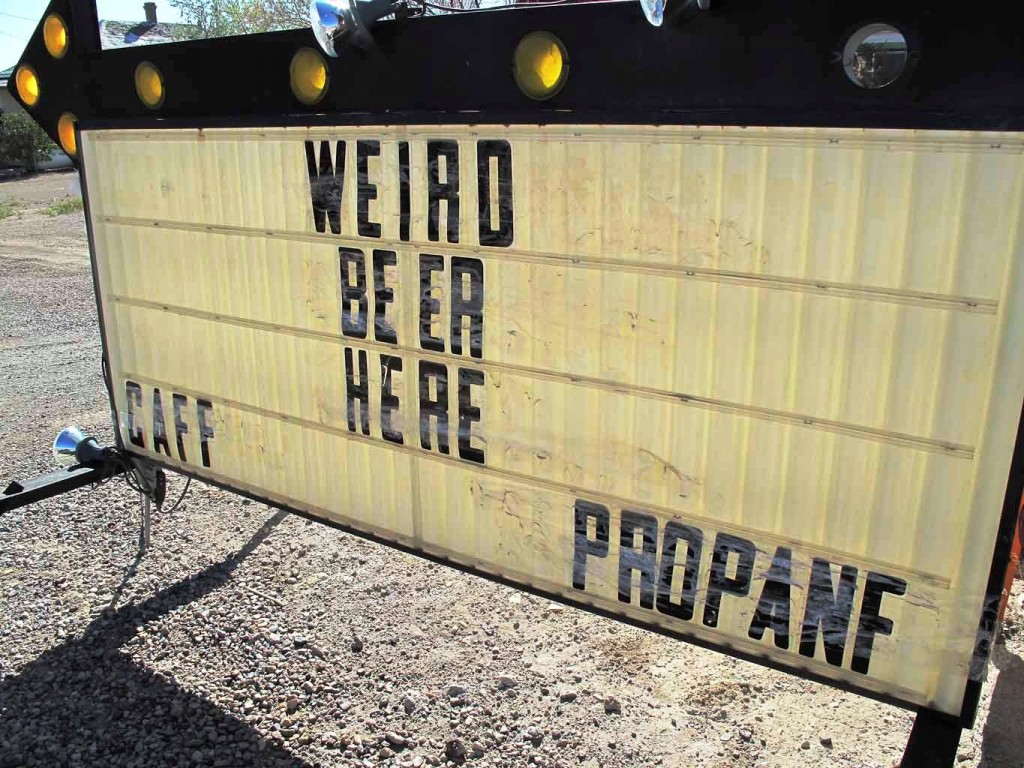 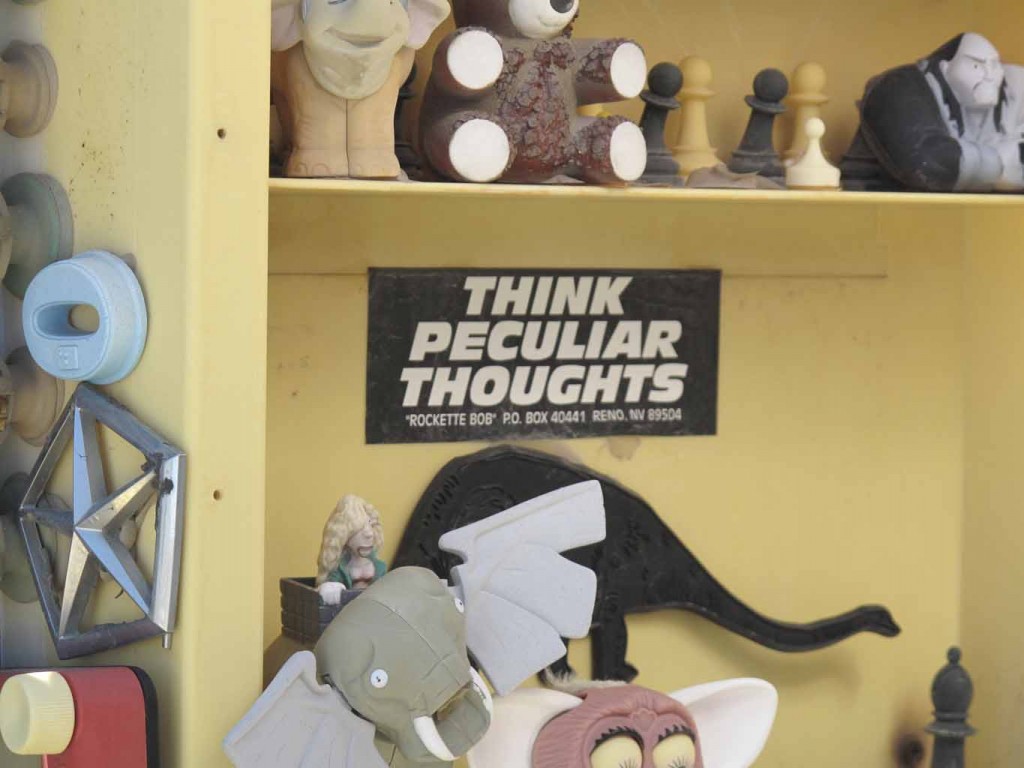 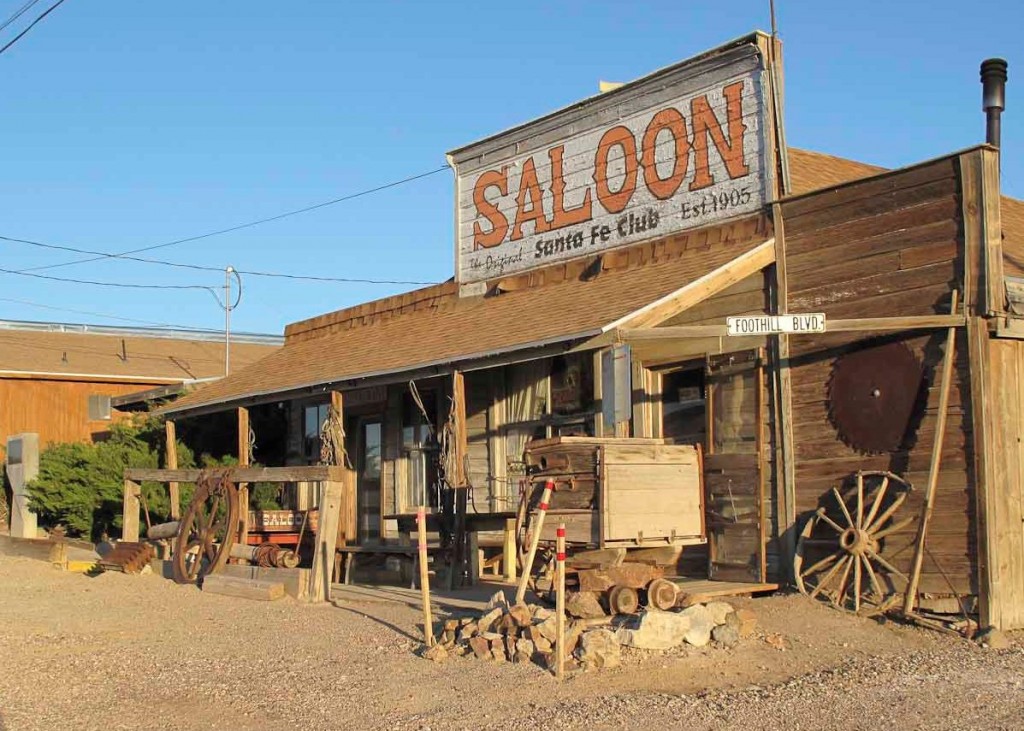 At the end of long hot dusty days in Goldfield, this place (the original Sante Fe Club, est 1905) was an oasis. The beer wasn't weird, but thankfully it was cold -- out hotel was right next door. Every hot rodder I know would go nuts here, with raw material everywhere you looked 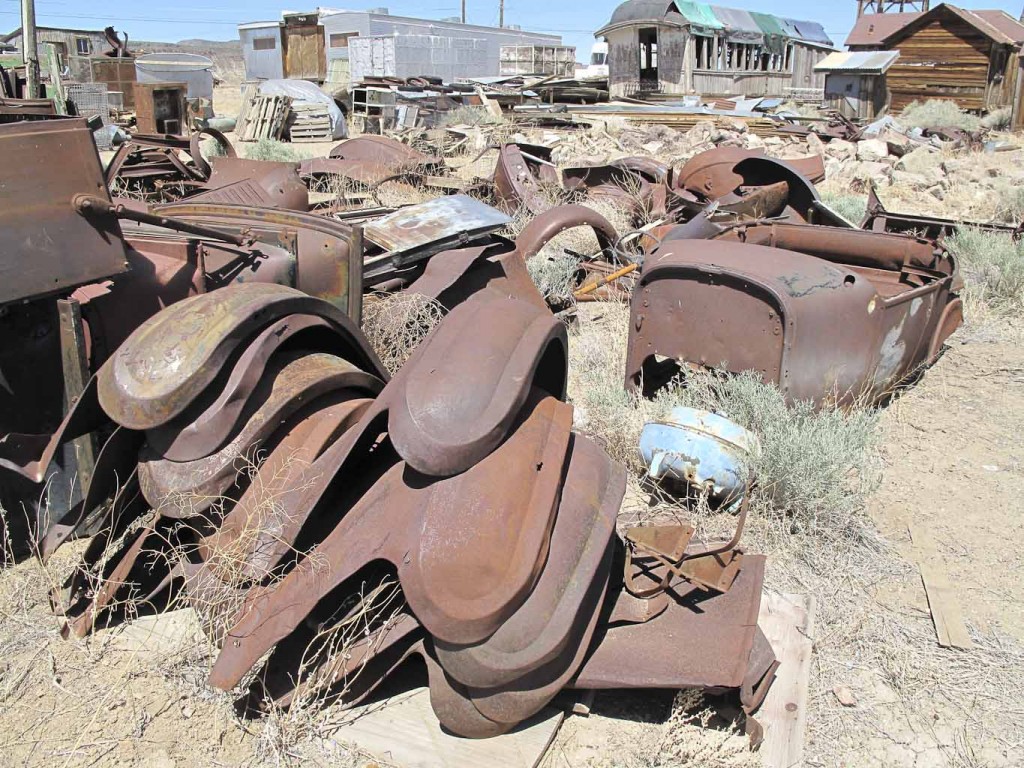 Old headlight lenses often contain lead, and they turn purplish blue after years of exposure to the relentless sun (although you really can't see much of it in this shot) - things of beauty 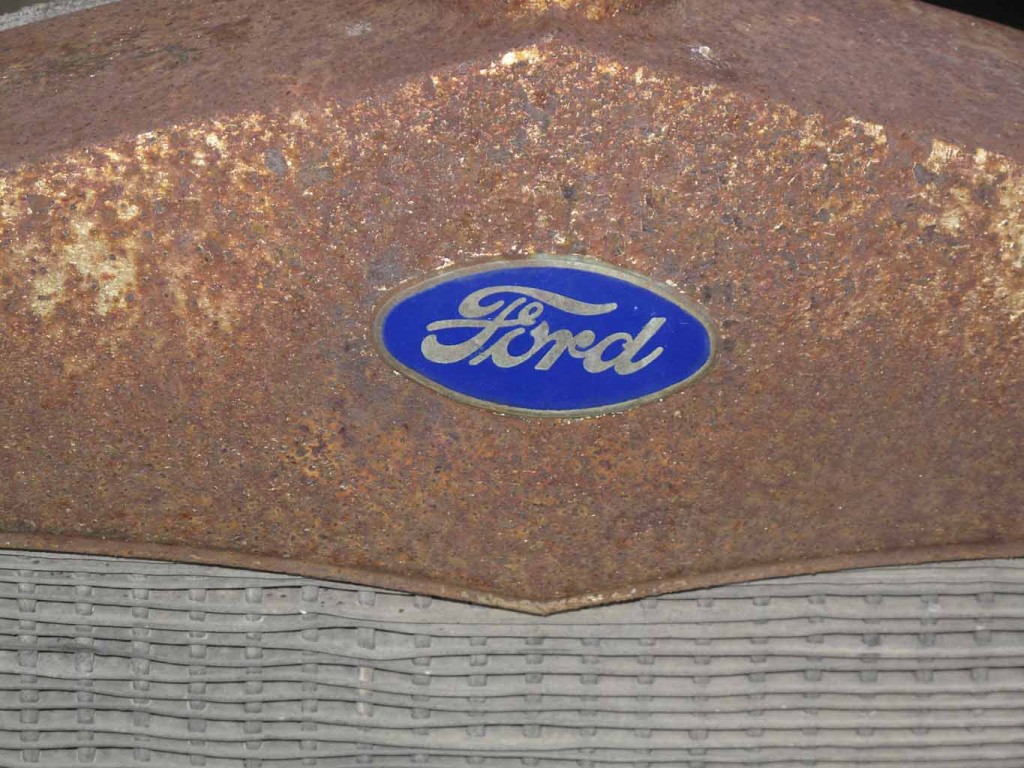 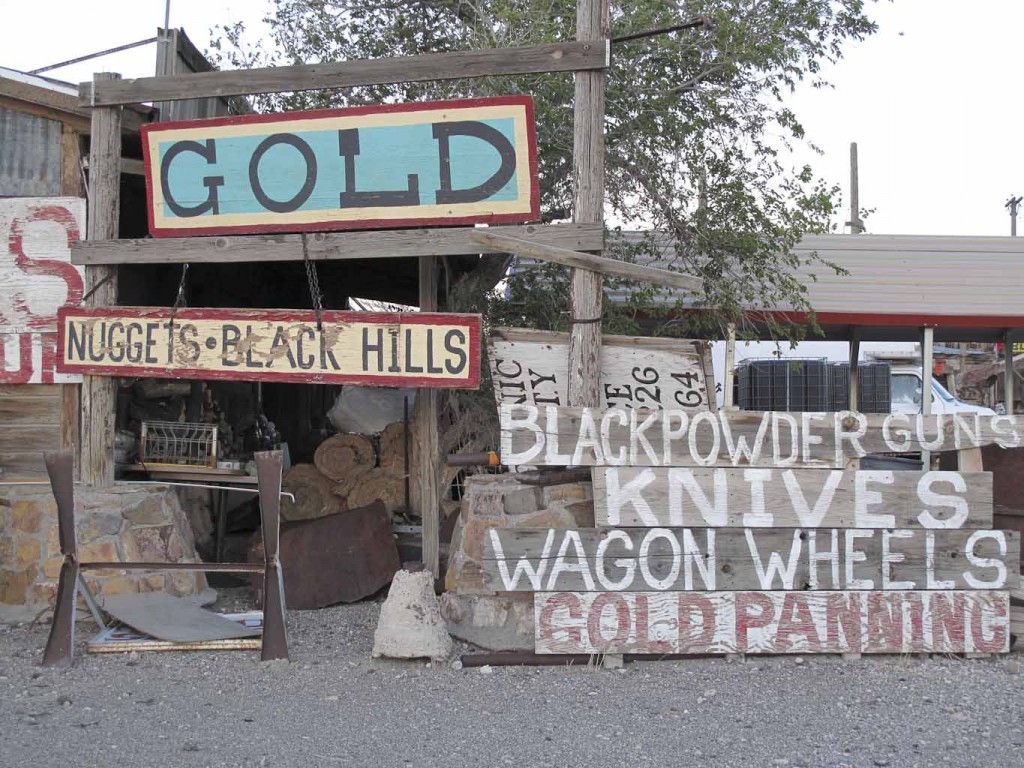 One stop shopping -- this place has everything you need! 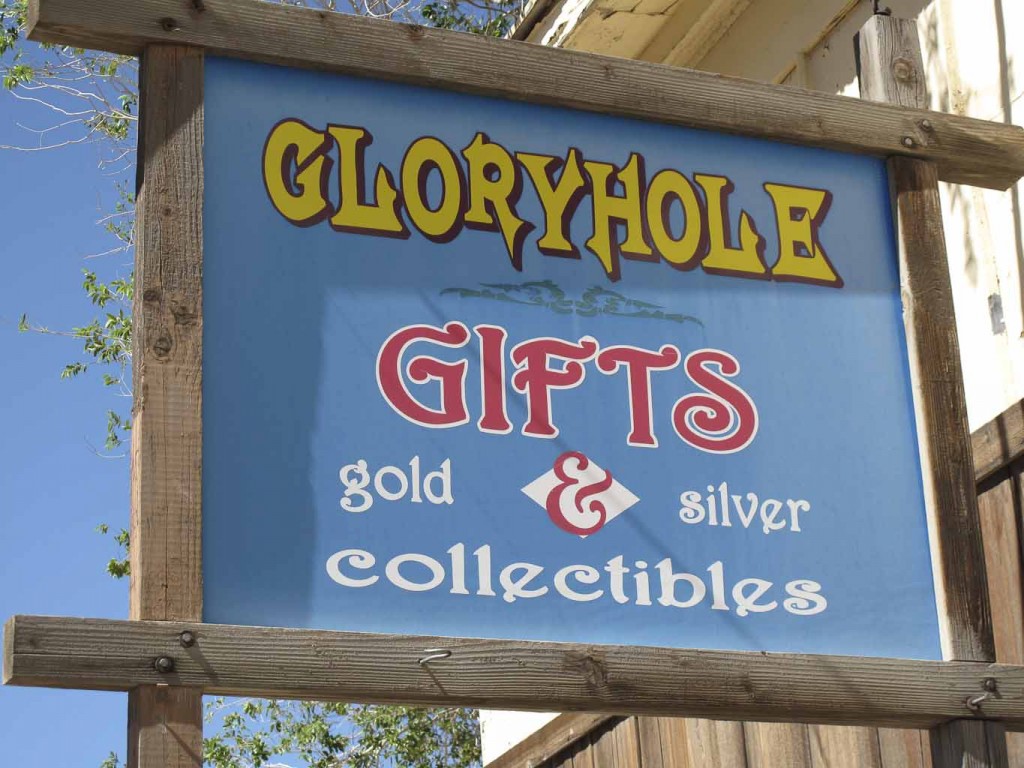 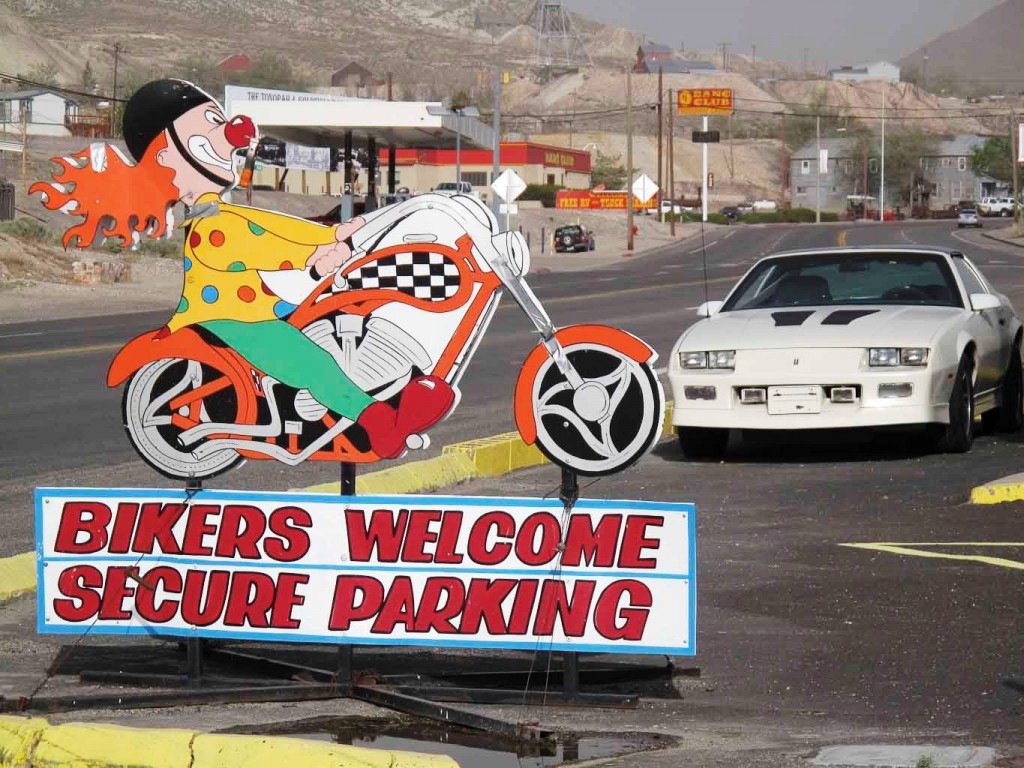 its nice to know that "bikers are welcome" and that the parking is secure, at the Clown Motel 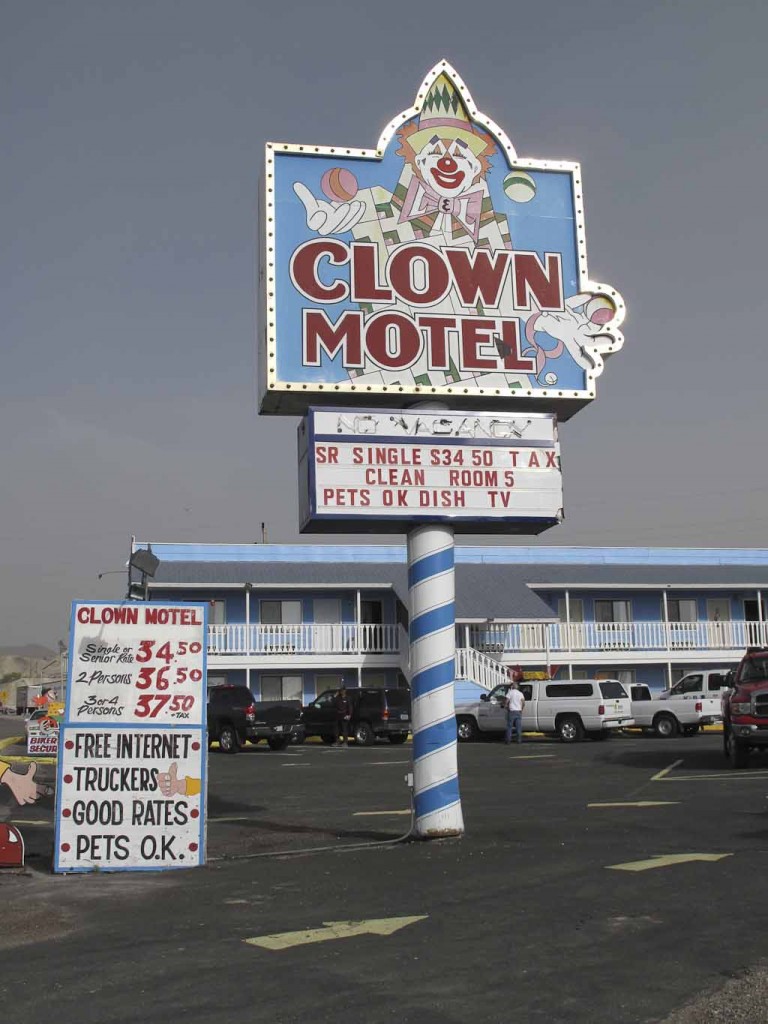 See, I don't make this stuff up 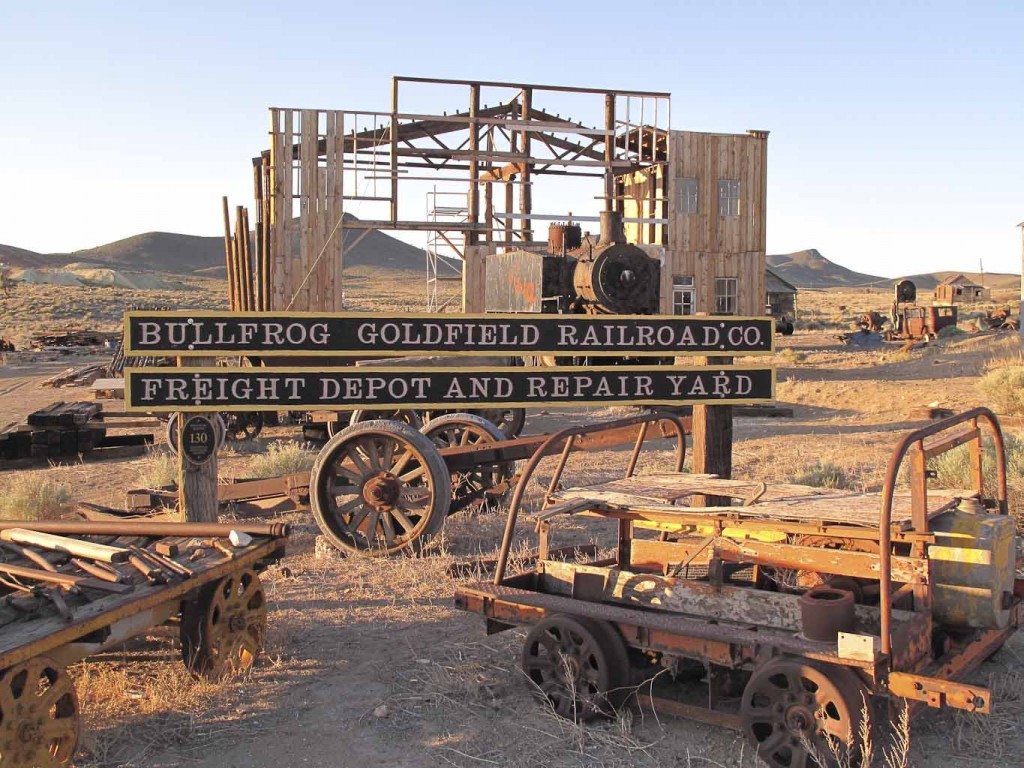 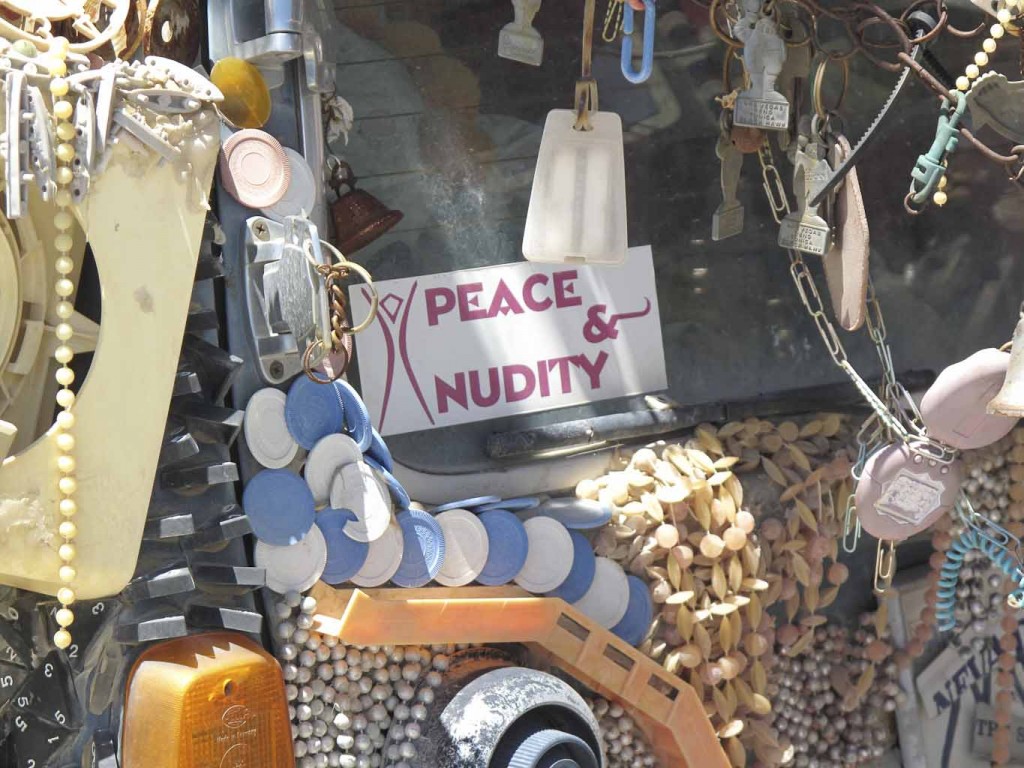