The Lady in the Lake 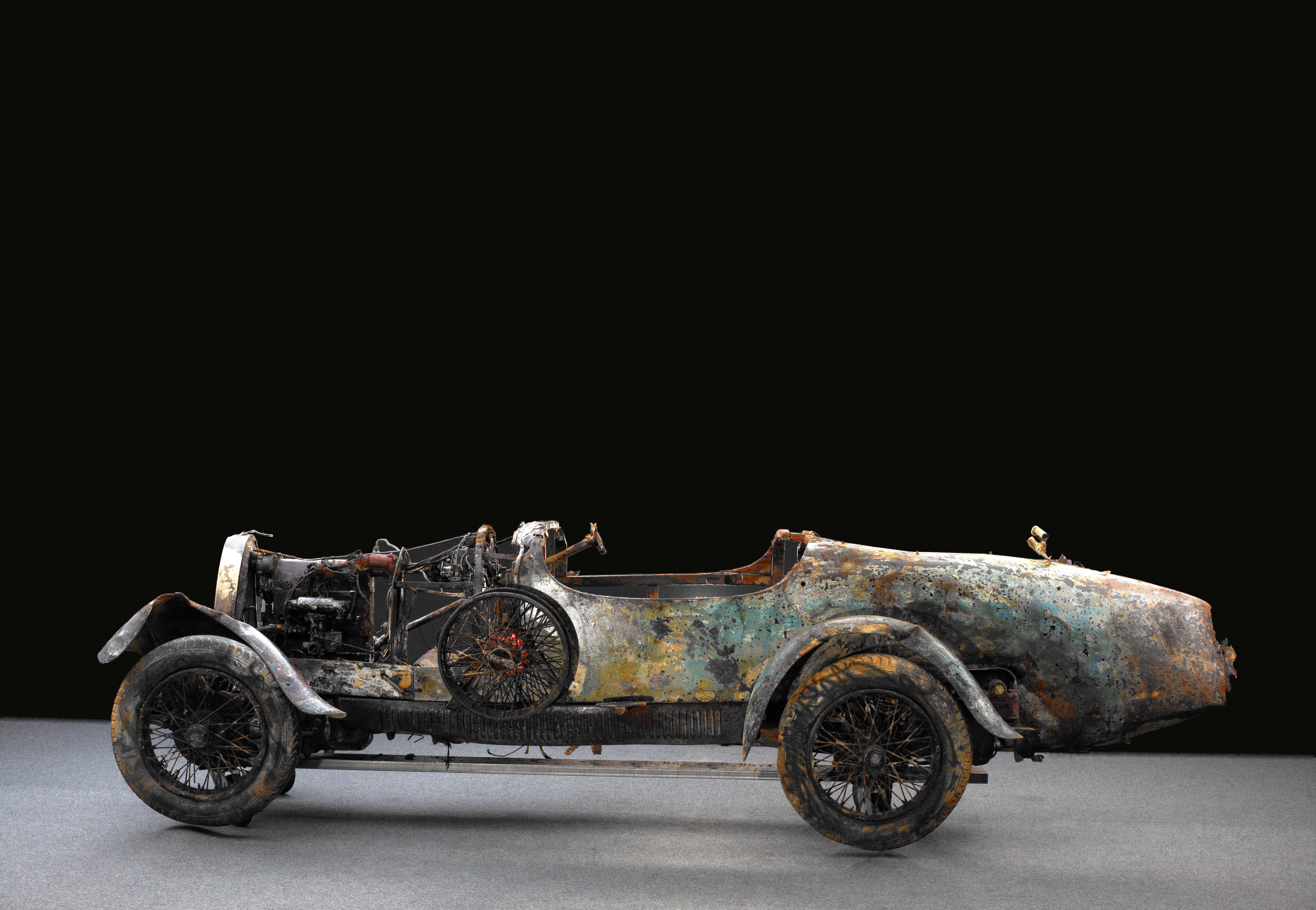 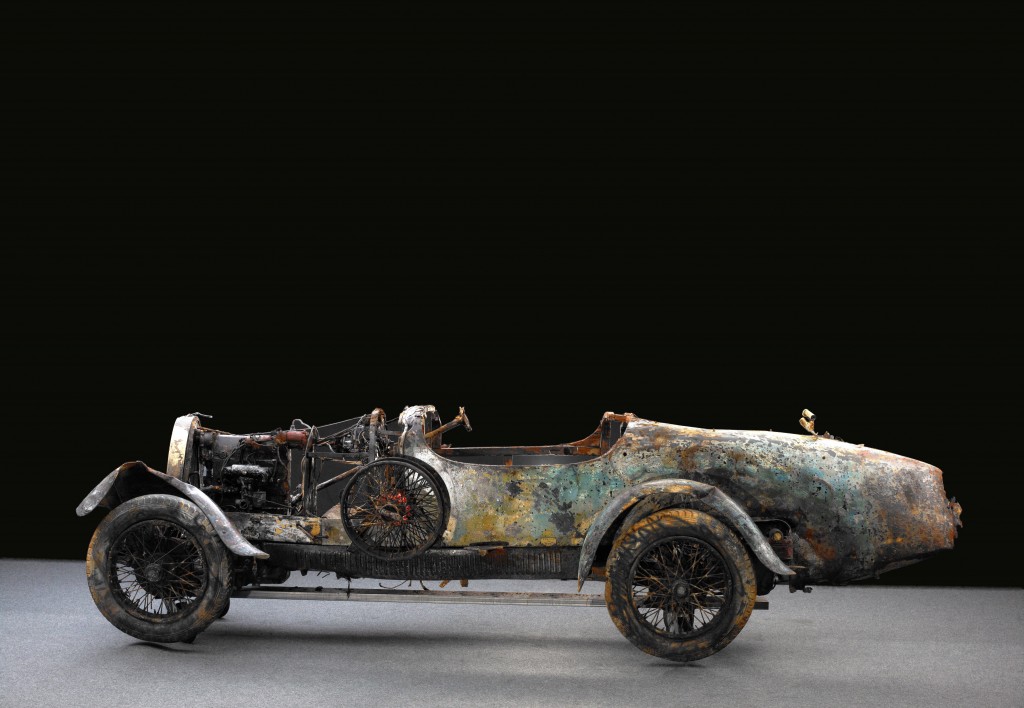 Truth or Myth? A rare 1925 Bugatti was tethered to chains and sunk into Italy’s Lake Maggiore as penalty for the non-payment of duty taxes. It was rescued from the bottom of the lake in 2009, to be sold for charity, and now sits unrestored in a museum in Southern California.

Most any Bugatti is a special automobile for numerous reasons. Bugatti is a prestigious French marque. Many of them are spectacular examples of great automotive design. Various Bugattis were successful racecars, and one particular 1925 Bugatti Type 22 “Brescia “Roadster is best known for having been allegedly won in a card game, then seized by Swiss authorities for the non-payment of duty taxes. Obscure and somewhat Byzantine laws at the time required that the seized property be destroyed, so those in charge at the time felt the best way to effectively yet mercifully do the job was to sink it into Lake Maggiore, a large and beautiful Lake which borders Italy and Switzerland. 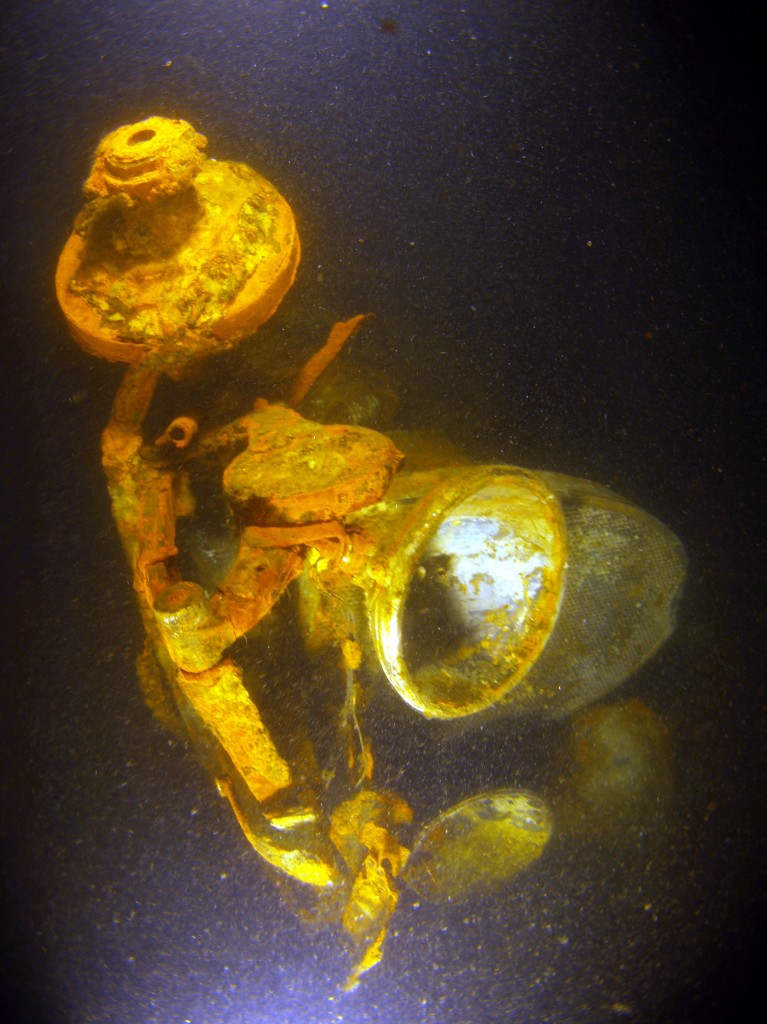 Here she is, as seen by divers, and lit by handheld underwater flashlights, resting at the bottom of Lake Maggiore

According to the lore and legend of the day, the French Blue sports roadster was owned by Bugatti team racing driver, and several times grand prix race winner Rene Dreyfus, who engaged in a poker game with a Swiss national named Adalbert Bode. Bode’s history is somewhat cloudy, with his interests and occupations noted as bartender, racing driver, and gambler — No matter, in or around 1934 in Paris, France, Bode and the ever-gentlemanly Dreyfus (who after retiring from racing as a professional, owned a famous French restaurant in Manhattan, named Le Chanteclair) reportedly consumed several bottles of fine champagne and then engaged in an impromptu game of poker, with the rare French Blue Bugatti two seater as the stakes. Dreyfus lost the game, and thus the car in the process.

When Bode attempted to bring his newly won car into Switzerland, he was unable to pay the duty taxes on his winnings. He reportedly left the car parked in a private garage near the small town of Ascona. Swiss law required destruction of the property to avoid unjust enrichment of the guilty party due to the non-payment of the taxes. The authorities, for reasons not entirely clear, chose to sink the car into Lake Maggiore, as opposed to merely impounding it, or perhaps disassembling or burning it. No matter, sometime in 1934 the car was tethered to 35 foot long steel chains and suspended off the shore into the water. The reason for the chains was that in the event the owner wished to pay his taxes and reclaim the car, it could theoretically be done. To further complicate this somewhat murky situation, there is also information leading to another possible owner, an architect named Marco Schmuklerski who moved to Ascona about the same time, moving there from France.

What seemed like the proverbial “good idea at the time” proved not to be, at least from the car’s perspective. Time and corrosion ultimately fatigued the chains and the hapless Bugatti broke loose of those reins, sinking to the lake bottom approximately 170 feet down. It came to rest on its left side, the wheels, fenders, and some portions of the bodywork compressing into the soft silt and mud on the lake bottom. Locals had never forgotten the story of the “The Lady in the Lake” and once it was located, it became a popular attraction for recreational divers. Among them was a young local named Damiano Tamagni.

Tamagni was attending the Carnival festival in Locarno, Switzerland on February 1, 2008 when he was set upon by at least three thugs who beat him severely. The 23 year-old Tamagni died as the result of his injuries from that savage attack. The motives for this murderous crime are not fully known; it may have been a robbery gone awry, and some speculate the act may have been a hate-related for Tamagni either being gay or perceived as such. No matter, local divers and Tamagni’s family began taking steps to rescue the Bugatti from the depths of Lake Maggiore, and auction it off to benefit the charitable foundation established in Tamagni’s name, its mission being to combat youth violence. 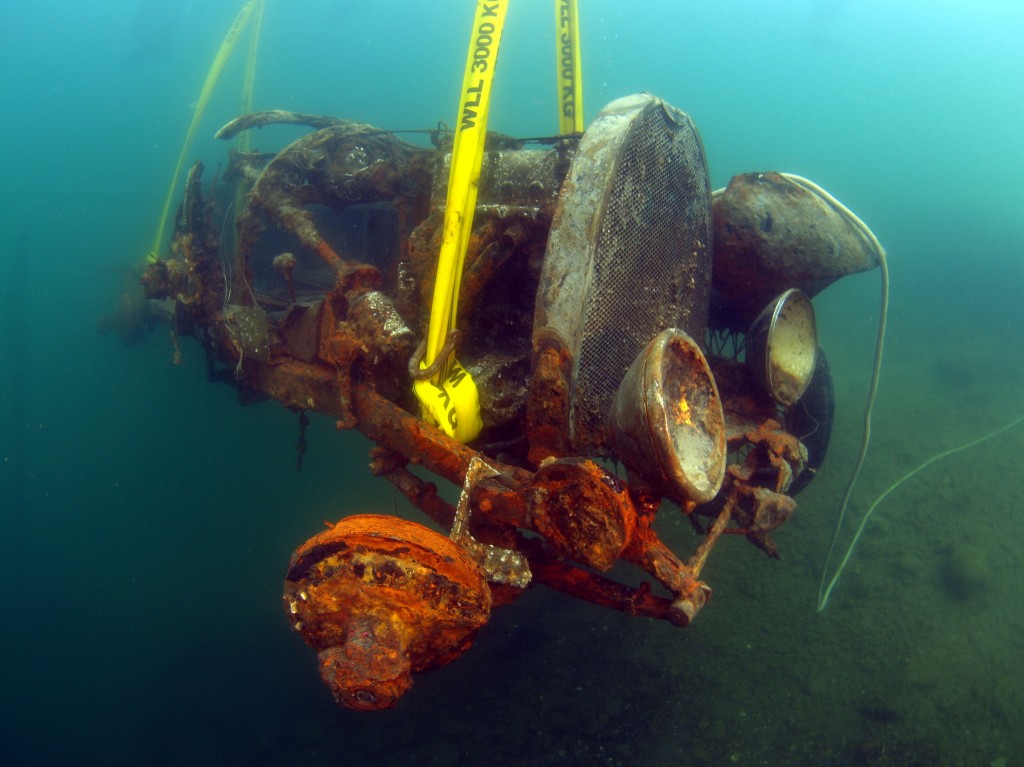 On its tethers, ready to be rested from the lake

Bringing the car to the surface of the lake proved to be a complex engineering and logistical undertaking that ultimately took nearly a year, with the goal of the car being sold by Bonhams auction house at its annual sale at the Retromobile classic car event in Paris in early 2010. The three prime protagonists in the rescue and exhumation effort were local diver/adventurers Jens Boerlin, Nicola Sussigan, and Stefano Mattei. Despite occasional bad bouts with weather, and the sinking of a floating platform built for which to work and help guide the car back to the surface, the team got the job done on July 12, 2009, to the cheers, tears, and applause of several thousand spectators. Although the car had certainly suffered from decades of submersion, a fair amount of the car remained intact; far more than if it had been in the ocean; Lake Maggiore is a fresh water lake, and the corrosive effects of ocean saltwater would have been dramatically more destructive. Oddly enough, the left side of the car, which had been pressed into the silty lake bed, was relatively well preserved. But the right side of the car, exposed to the open water and to any bacteria choosing to feast on the metal, wood, rubber, and other components of the car, suffered considerably more decay. 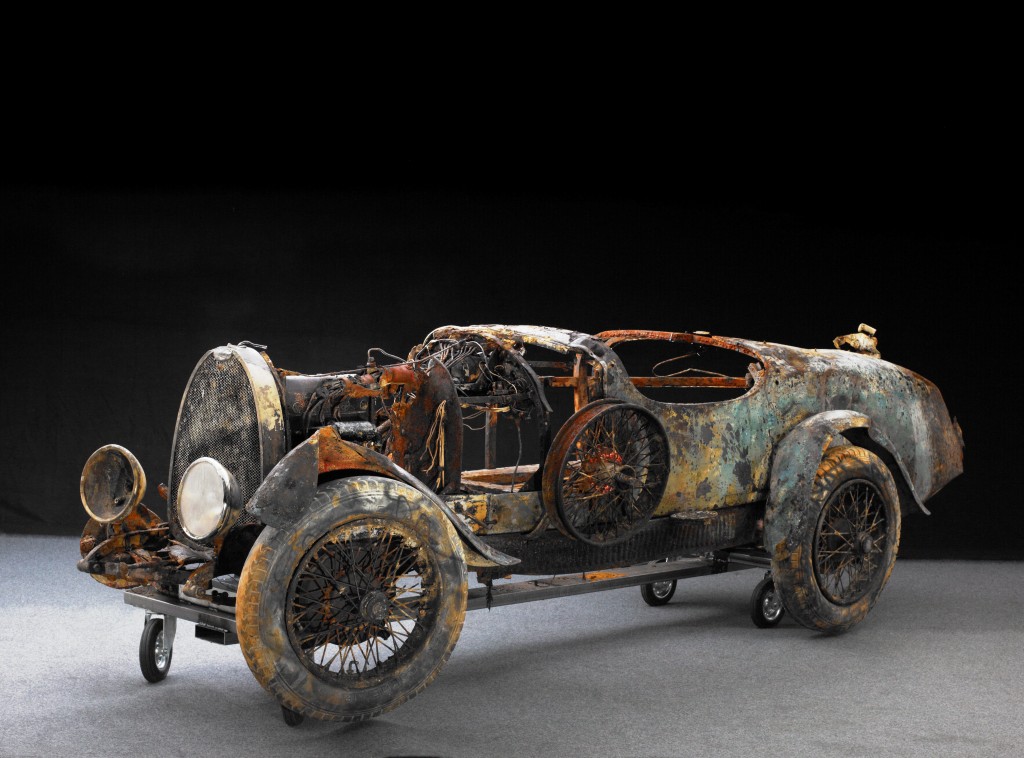 Damaged wheels and missing tires prevented the car from being moved easily around, so Bonhams’ constructed a relatively simple metal framed dolly so the fragile chassis could be moved and transported without risking further damage. The car was also washed in order to remove the worst of the mud and silt impacted into the chassis, and minimizes their potentially corrosive effects.
Bonhams and the Foundazione Damiano Tamagni were besieged with requests about the car, how and when would it be sold, what was the real story, how much was it worth, and such. Even Bonhams’ best automotive experts didn’t really know for sure, as selling this type of vehicle was new territory for everyone. Restorers, collectors and potential buyers speculated as to whether the car could, or should, be restored. Fortunately, Californians Merle and Peter Mullin, and Andrew Reilly, (founders and benefactors of the Mullin Automotive Museum in Oxnard, California, and the museum’s curator, respectively) were of the strong opinion that to restore the car would be a crime against its history. The Mullins, a couple of considerable taste and means, are known for one of finest collection of art deco era French cars in the world, and while they have many concours winning cars in their museum, they felt the only proper way to respect the car’s history, and pay fitting tribute to young Tamagni, was to preserve, conserve, and present the car in its as-found condition.
Bonhams consigned and auction the car in Paris, as planned, and Mullin was the winning bidder, paying a somewhat princely sum of $366,367 including purchase price and commissions. 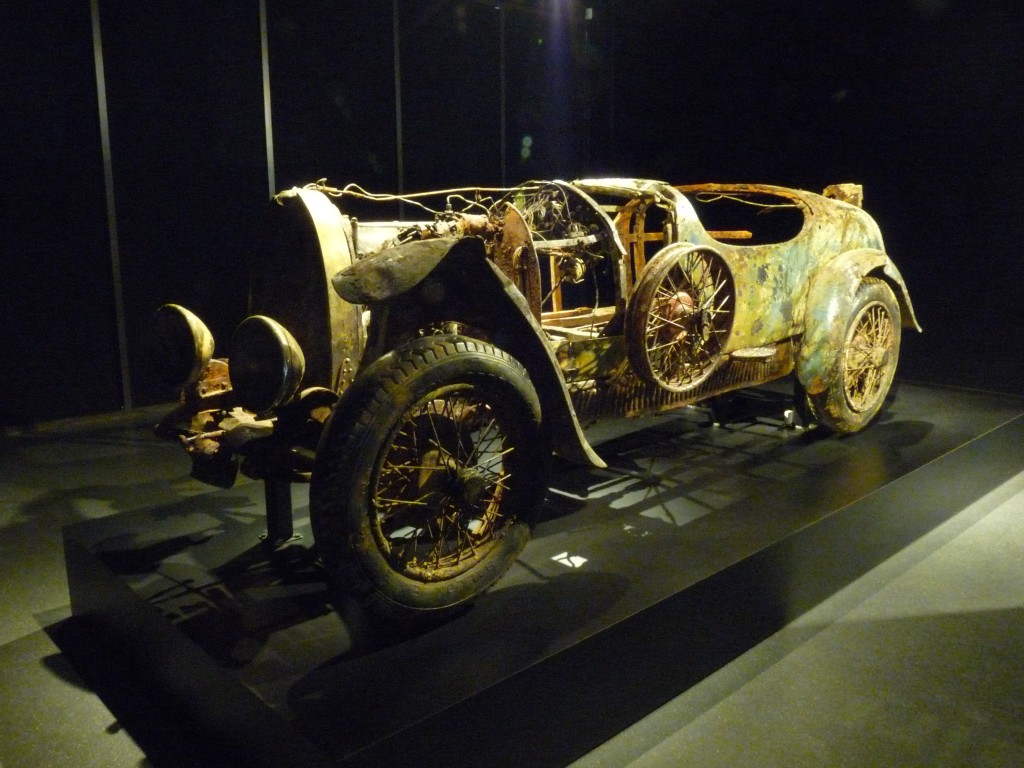 Curator Reilly acknowledged that his role, as it relates to this car is now more that of preservationist; needing to protect the car in its current condition, and prevent further degradation without any actions or process that could be deemed “restoration.” The closer Reilly inspected the car, the more of its secrets were revealed. 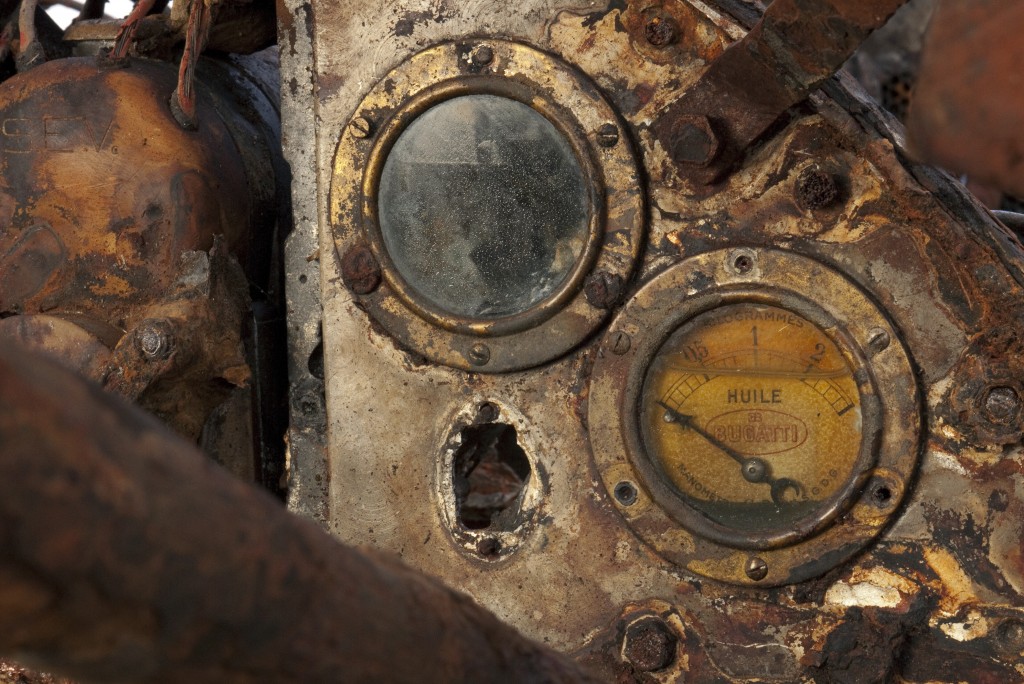 Many of the glass covered instruments were filled with water. The manual transmission, apparently tightly sealed when built, still held transmission oil from when the car roamed the roads and race courses of Europe. The car is now on permanent display at the Mullin Automotive Museum, the star of its own special exhibit, bathed in an eerily soft and soothing light, designed to the extent possible mimic its appearance while submerged, surrounded by photography of the car while it lived at the bottom of Lake Maggiore. The major difference is that the car sits upright, rather than on its left side, as it did when on the lake bottom. 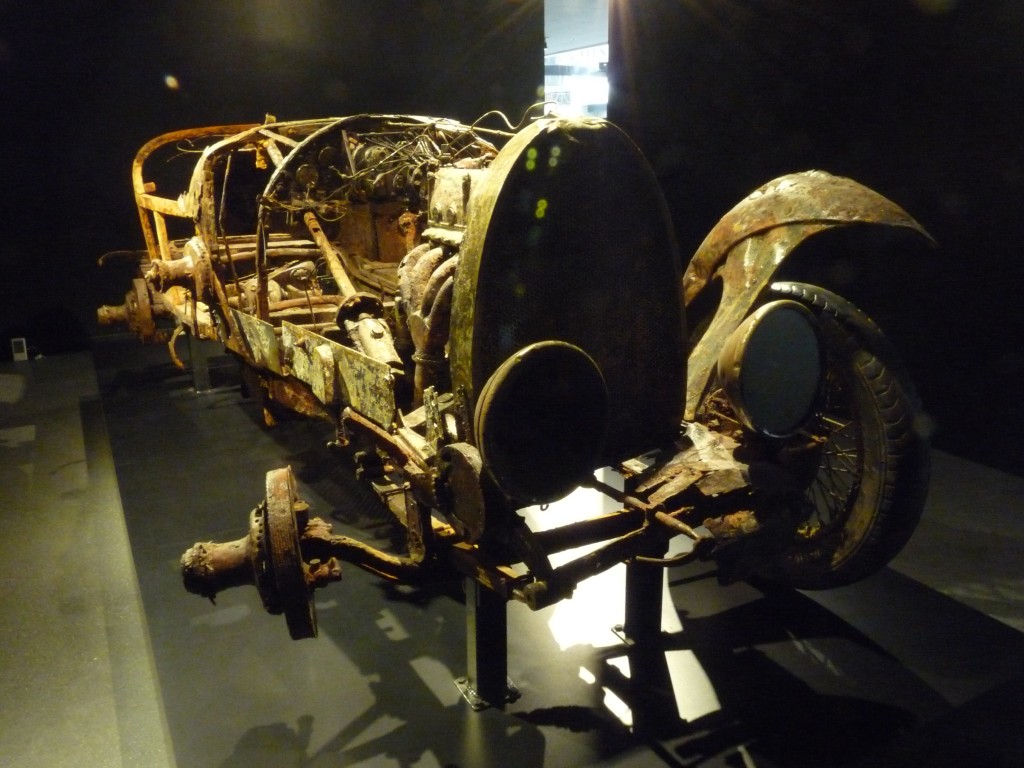 Visit the Lady in the Lake, and support the museum, at www.mullinautomotivemuseum.com

The Lady In the Lake is an excerpt from Matt Stone and Preston Lerner’s upcoming book, “History’s Greatest Automotive Mysteries, Myths, and Rumors Revealed” to be published by Motorbooks International, Fall 2012. www.motorbooks.com.