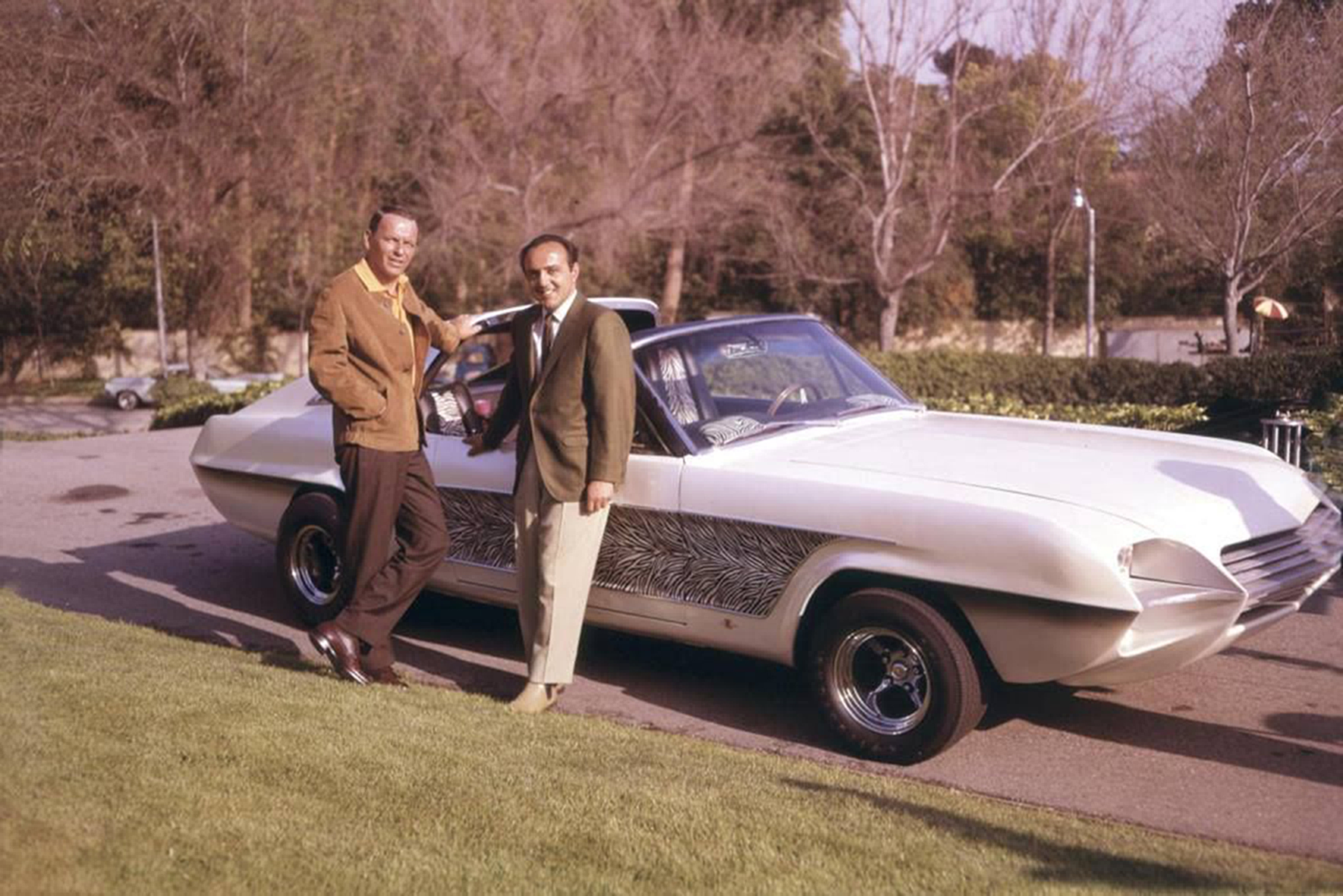 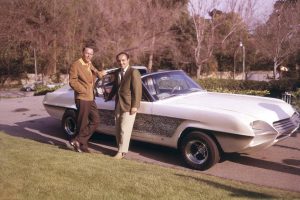 Frank Sinatra, George Barris, and the Zebra Mustang from the movie “Marriage on the Rocks”

photos by me and courtesy of the Petersen Automotive Museum; double-click on any image to see it full screen in hi res. 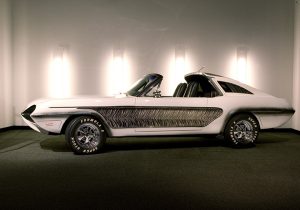 Believe it or not, there really is a ’65 Mustang underneath there, somewhere

The definition of 50s custom, the famous and fabulous “Hirohata Mercury” lead sled by Barris

The late George Barris was the self-proclaimed “King of Kustomizers,” building hot rods and customizing cars since he was a kid.  He and brother Sam built countless famous and seminal machines, and an astonishing number of them were Fords.  The seminal Hirohata Mercury custom, built for LA hot rodder Bob Hirohata, is likely the best, and certainly the most famous, lead sled custom in the world.  This two tone green wonder had it all; a chopped top, a body channeled over its frame, fabulous chromework, frenched in headlights and all the touches that define a lead sled of the early 1950s.  Plus perfect lines and proportions.  Lest we forget that Barris built the original Batmobile out of the late 50s Lincoln Futura concept car.  Plus the Munster Coach and the Beverly Hillbillies TV cars were based on Fords.  Sonny and Cher drove Barris customized Mustangs.  It’s a long list.

Which brings us to the 1965 film “Marriage on the Rocks.”  The title of this very 60s comedy romp carries a double meaning “on the rocks” standing for both a troubled marriage, and how many of the characters liked their drinks mixed, as in “on the rocks” or over ice.  It stars Frank Sinatra, Dean Martin, Debora Kerr, Cesar Romero, and Sinatra’s daughter Nancy – in spite of all that big hitter vocal power in the cast, it wasn’t a musical.  Sinatra and Martin play advertising execs, in this instance developing an ad campaign for a mythical car company.  Nancy Sinatra plays Frank’s character’s daughter (not much of a stretch there). Little of that all matters as the plot whimsically wings its way through a quicky Mexican divorce, and an equally ill-fated Mexican marriage that goes really wrong.  In the end, everyone ends up happily ever after.

The producers engaged two customized cars for the production.  Frank’s character drove a stock ’65 Lincoln Continental convertible, but a new ’65 T-Bird was customized into a roadster for Dean Martin’s playboy character, and an early build ’65 Mustang coupe was to be wildly customized for Nancy.  At the time there were a handful of significant carbuilders and customizers who typically handled such undertakings for Hollywood: they included Dean Jeffries, Gene Winfield, Tom Sparks, Darryl Starbird, and George Barris.   Both jobs for “On the Rocks” were given to Barris.

Some of Barris’ TV customs were somewhat slapdash, built primarily of bolt-on “hardware store” parts; gills, grilles, a variety of handles and knobs and chrome bits plus assundry vinyl trimmed add-on panels, mag wheels and a colorful paint job, to add flash for the cameras.  Others were seriously customized cars involving considerable design work, and major builds; The “On the Rocks” T-Bird and Mustang fall into the latter category. 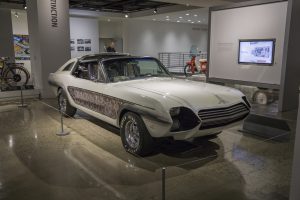 The Mustang’s top was cut off, and replaced by a scratch-fabbed rear roof sructure, but the front area over the passengers is completely open with no removable “targa” top section to replace it.  The tapered rear roof section created a set of “fastback buttresses” which met up with the pointy restyled rear fenders.  The stock rear fascia and taillights gave way to a long, horizontal tail and stoplight panel.  The sides of the car were deeply sculpted creating body lines that wrapped up around and over the front and rear tires; the door sides are coved, although no longer exactly resemble the stock Mustang’s side coving. 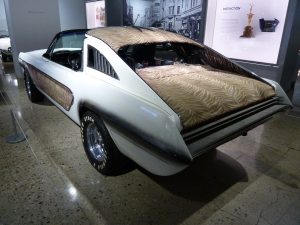 The front of the car was restyled even more radically than the back, roof, and sides; The rectangular grille opening is new and larger than the original Mustang’s, and the stock single headlight treatment went away in favor of a quad light look, with each side wearing a pair of vertically stacked European style “square oval” headlight units.  These lights were deeply recessed into the leading edges of the fenders, and the radiator opening was fitted with a custom fabbed, slatted metal grille structure.  Perhaps the most over the top touch was the zebra skin-like fabric pasted to the sides of the car, filling the aforementioned door and front fender coves.  The modded body was finished off with a white pearl paint job, although the rear decklid was originally painted satin black (but along the trail recovered in the same zebra fabric), and chromed four spoke mag wheels with wide oval tires. The Mustang was so heavily redesigned and modified that without looking at the stock instrument panel, you may or may not know it’s a Mustang as it carries no Ford badging or “running horses” to identify it.  From the rear particularly, excluding the open targa top treatment, the overall look is slightly AMCesque, perhaps like some sort of over the top Javelin or AMX concept car. 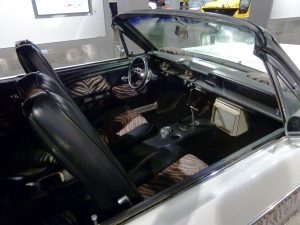 The interior is architecturally stock with the exception of some notable improvements.  There’s an upholstered custom console running front to back along the driveshaft hump. It contains a pair of cocktail glass sized cupholders, logical enough considering that there’s no rear window, and a bar mounted where the rear seat would normally be (so much for the notion of not drinking and driving, but hey, it was the movies), and organ pipe stereo speakers mounted on the rear deck.  There’s also a TV mounted at the front edge of the console, just forward of the stock Mustang floor shifter, and the seat centers and interior door panels continue the zebra skin fabric theme.  Plus there’s a period-common, undersized steering wheel with chromed spokes – replete with “lightening holes” and a black foam or plastic rim.  Some would categorize this as a lowrider style steering wheel.  The boomerang shaped TV antenna was mounted snug to the rear of the targa roof section.  The Ford V-8 and associated automatic transmissioned powertrain are stock. 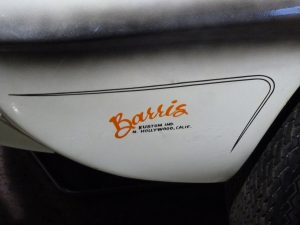 Over time, various magazine stories and other talk about the car state that it was “built for Nancy Sinatra to drive in the movie…”  Which she never did – because when her on-screen boyfriend wheels the Zebra into her parents’ driveway, Miss Sinatra’s character rides up in the passenger seat.  When they hop out, her father asks about the car, she proudly says it’s something “Jim designed.” Unfortunately, this absolutely unique Barris Mustang enjoyed only about 15 seconds of on screen time, And that’s it.  It is possible that Nancy drove the car for camera, but a post production edit resulted in about 14 minutes of the film hitting the cutting room floor.  Some of the Mustang’s on-screen time may have ended up there too.

The “On the Rocks” Barris Mustang’s life post filming is a bit murky.  Somewhere during its life, the original Barris-added wheels were replaced with Cragar SS rims.  We don’t know for sure if the studio paid for the car’s build and let Barris keep it (not uncommon at the time) or if the studio took possession of it, and later sold it into private hands; either scenario is possible.  DMV records indicate that the late Robert E. Petersen purchased the car from a Don Chambers in 2001.

It was in the former’s possession at the time of his passing, to be formally donated by the Petersen Family Foundation to his namesake Petersen Automotive Museum in 2017.  There could be no better place for this one of a kind Mustang to live out the rest of its days than in this esteemed museum’s permanent collection, since it had long been Mr. and Mrs. Petersen’s goal to gather, share, and celebrate TV, movie and celebrity cars.  The car, colloquially referred to as the Zebra Mustang, is often displayed in varying exhibits at the Petersen, rubbing elbows and sharing floor space with Barris’ original Yamaha “BatCycle” from Batman, of course, and Steve McQueen’s Jaguar XK-SS, among others.