The Gentle Art of Just Driving Around 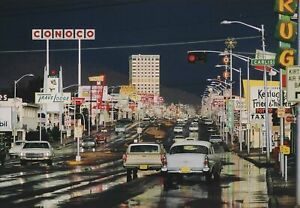 I was friends with a guy in high school named Don (weren’t we all?).  Don was a basically good guy, and we shared several interests, including and primarily cars, and tring to meet girls.  After high school, Don moved to Phoenix to attend deVry tech school.  So I went to visit him once or twice.  Early in his driving career, Don had a couple of typical cheap first cars.  But as a high school graduation present, and knowing he was off to live on his own a state away from his California home, his parents bought him a brand new ’76 Pinto.  It was silver over black, with the 2.3-liter I-4 engine and a four speed transmission, which immediately made it cool to me.  He kept it up pretty well, and also kept it stock, except I think we put a glasspack muffler on it for a zoomier exhaust note.

I went and visited him in Arizona a couple times, he shared an apartment with a couple other guys, and after we hung out and hung around, visited a few of the touristy things, and then did a fair amount of nothing he said “let’s go out driving around.”  I said “where we going?”  To which he honestly replied, “I don’t know, why does that matter?”  At first I just didn’t get it.  Why would we just go driving around town, and a bit out of town, with no goal, aim or location in mind?  But he was my friend and my host so I went along with it, as they say, just for the ride.

And after a few hours it made sense to me.  You just see things.  And stuff.  And people.  Cool cars on used car lots.  Girls.  And of course the cassette tape player never stopped belting out all the music we loved.  7-11 stores were relatively new at the time, and I was amazed at the variety of interesting and must-have things they carried, all in this little jewelike box of a store, with parking right out front.  And the sodas were large, with lots of ice, and cheap.

We saw interesting houses and buildings, fabulous and otherwise.  Cool or otherwise compelling cars wherever we went.  Girls.  7-11s.  This was all before streaming services, the internet, and cable TV, and the entertainment out bombing around in Don’s Pinto sure beat channels 2, 4, 5, 7, 9, 11, and 13, assuming the “rabbit ears” antenna would pull them all in.  And it was all honest and entertaining fun; we never got into any trouble, never really engaged with anyone other than the usual “hey, whutter you doin?”  We did nothing wrong or illegal or even really risky in any way.  We just drove around, looked, and soaked in.  Now I can’t say we never stopped at a used dealer and BS’d our way into a test drive of that metallic green ’68 Pontiac Formula 400, but otherwise, we harmed nobody.  Sure we burned a fair amount of gas, but it was cheap, and we pooled our quarters and singles so it wasn’t so bad.

Now as a much older man, who often considers such things, it dawns on me that we, as youth or society, don’t do much of this any more.   Which to me is unfortunate, as everyone runs around with their head stuck in their phones, waiting for their future autonomous car to take them someplace without them having to drive or pay any attention.

I will admit to you that now and again, when I have a little time to kill, I still do this.  When I have a full tank and some time to kill in between whatever.  I don’t spend so much time visiting 7-11s shopping the selection of SlimJims and beef jerky that we used to, but I still love to look at interesting homes and real estate, and my radar is always up for compelling cars — in fact just yesterday I drove by a house with a large carport near home which contained a new GranSport Corvette and a beautifully and an immaculately restored Ford Model A pickup — thinking “now this guy’s got it right, some fast, sporty and dangerous that he can drive every day, and a charming old classic to slow down with and enjoy on the weekend.”   I always enjoy my quiet time doing this, and see interesting fun things; and it works in nearly any city state or country i visit.

It’s a somewhat lost art these days, but I suggest you try it.  Next time you’re in a new place, or maybe just stuck in the town next to where you live, buy yourself a tank of overpriced gas, pickup a ThirstyTwo Ouncer of your favorite soda or slushee, and just drive around.  Just to be driving around.  I could be wrong, but I bet you’ll enjoy it.