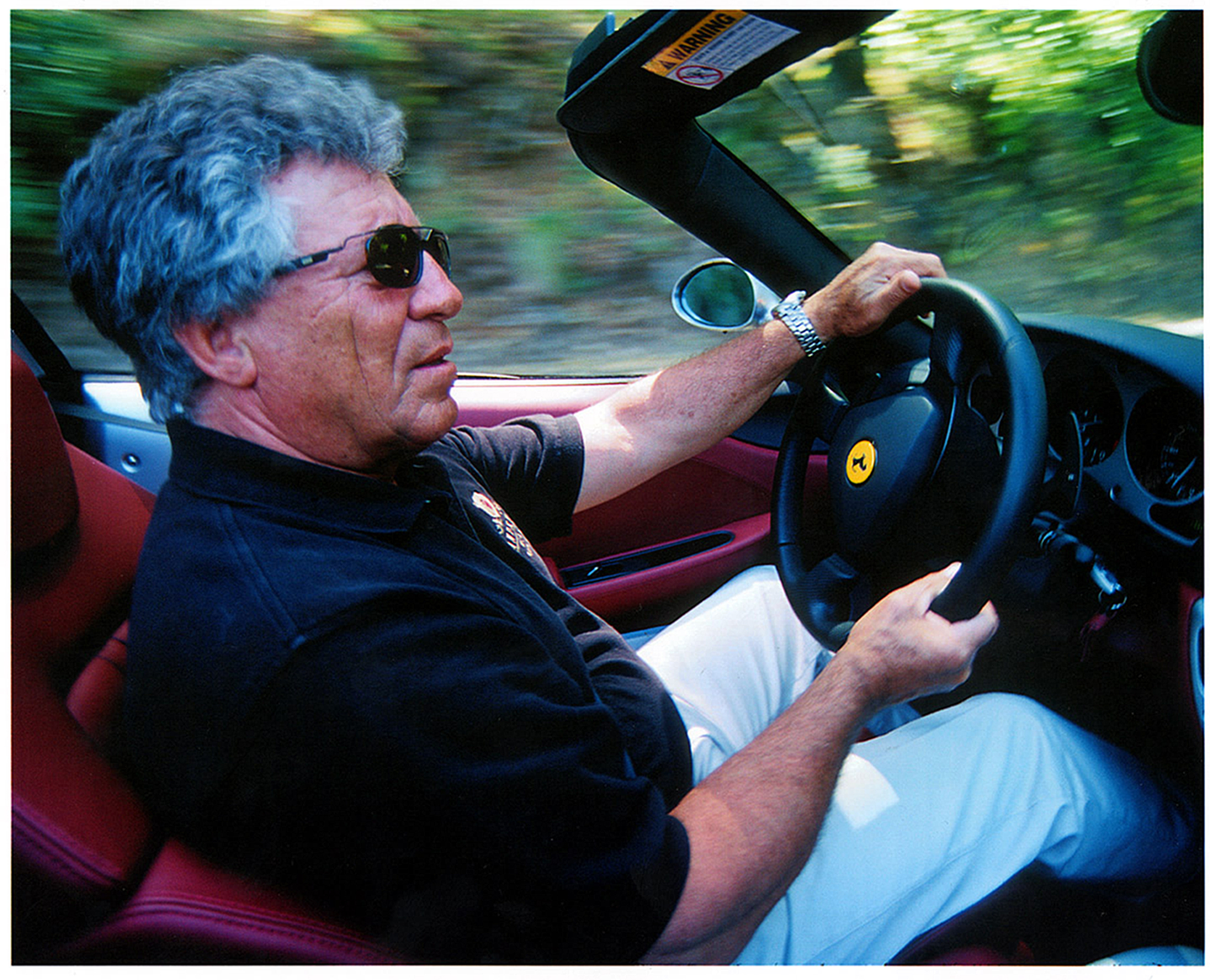 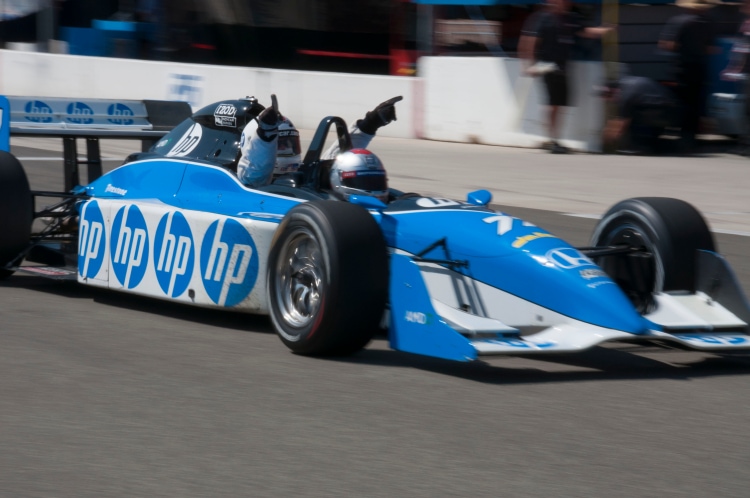 photos by me, and Mel Stone

No matter how good a driver you are or think you are, I’ve learned that you really discover how marginal a driver you might be when you ride with or get schooled by someone really good.  Or superlative.  Or legendarily world-class – like Mario Andretti.

I’ve been in the right seat with a lot of great drivers, four-time Trans-Am champ Tommy Kendall (very sharp guy, and really understands the physics of what’s going on with a car when accelerating, braking, and cornering), Randy Lanier, early 80s IMSA prototype champ (butter smooth, and willing to share his secrets and suggestions), George Follmer (best heel-and-toe double-clutch downshifter I’ve ever seen) and then, my uber hero and friend, the incomparable Mario Andretti.

Super Mario brother needs no introduction here or anywhere else.  Because after all, he’s Mario Andretti.

It’s been my distinct priv to ride along with him on three occasions; the first during an exotic car road test program I was involved with (Ferrari 360 Spider, Aston Martin DB7 Volante, BMW Z8, and Mercedes-Benz SL55 AMG).  The idea was that he would attack the backroads not far from his Napa Valley winery property in each car for about 25 miles, and I would ride along, make notes, and take a few photos.

In my life and career, I’ve never witnessed anyone that so clearly and deeply just loves the art and discipline of driving.

He drove all of these four exotic convertibles quickly and with gusto, never putting us or any others on the road at any risk or peril.

It was thrilling to watch his mental computer, butt dyno, and gut gyro feel out each car’s strengths and weaknesses, plus its handling limits, powerband, and such.

The one he seemed most interested into sampling was the SL55, I’m guessing primarily due to its rock-solid chassis, and high horsepower, and torquey supercharged V-8.

He loved the big power and the handling, was less pleased that the automatic transmission wasn’t as responsive to his up-and-downshift requests as he wished.

Somewhat ditto the automatic-equipped Aston Martin, with praise for its howling V-12 engine, and less glow for its somewhat sluggish slushbox that shifted far too softly for his taste.

He praised the Z8 for its smooth and strong V-8, stable chassis, and liked that it had a 6-speed manual gearbox, which he shifted masterfully.  A comfortable and smooth GT for long fast drives, he called it.

The Ferrari was his clear favorite (big surprise there — or not).  He enjoyed paddling the F1 robotic gearbox, and got the most out of the Spider’s mid-engined handling persona.

Our drive route took us 12-13 miles out from his winery to a pre-scouted, turnaround point, then back.  The day was lovely, the top was down, the sun was shining, and Andretti was smiling, driving, talking, and having fun.

By the time we got to the predefined turnaround point, Mario had already been there three previous times, and he knew where it was.  In the Red 360, he blew past it with his right foot on the floor.  I mentioned to him that he “missed the turnaround point,” and he waited for about 10 beats before he looked at me and said, “Huh?  You say something?”  I again referenced the turnaround point to head back, and he said, “no, my turnaround spot for this car is still another 10-15 miles away yet.”  OK, signore – you’re driving.  Andiamo!

He handled each car with aplomb, never really inducing any meaningful understeer or oversteer, but without a doubt moving along; those hands so perfect on the wheel, and every move, be it acceleration, cornering, or braking, happening with absolute smoothness and conviction—a bit like watching Zubin Mehta conduct the LA Phil.

My next ride came at what used to be called Sears Point Raceway, also in central California’s wine country, which at the time was Infineon Raceway, and now Sonoma Raceway, a fast, and highly technical track I’d never driven or ridden on.

Our ride that day was a Porsche SuperCup GT3.  I barely remember those laps as they went so quickly.  Sonoma has a couple of semi-blind spots cresting a hill you can’t see so well, and of course, Andretti knew exactly where to place the car so as to exit the hill or corner on the perfect line.

His extreme skill wasn’t any surprise to me, but it was inspiring to enjoy the cornering, braking, and accel of a real live GT class racecar.  Many streetcars tend to wilt a bit after a day’s flogging on a fast racecourse, but the big Porsche suffered none of it.  I could drive one of these cars, but hardly like he did.

You’re likely aware that Mario is the star of a joint venture program with Honda, Firestone, and the National Guard, giving hot laps in a dual-cockpit IndyCar at several tracks on the IndyCar circuit, Indianapolis among them.

This is a superb program where sponsors and fans can buy a few quasi 200mph laps in a very real if somewhat longer wheelbase Dallara Indy Car.  Of course, I had to do it, and the schedule and logistics made it easiest to put together at the very fast, Southern California located Auto Club Speedway in Fontana, California, just an hour from my Los Angeles area home.  I’ve watched Mario race on many big ovals, and others and I couldn’t wait to see them from his viewpoint (as I’d be sitting in a second cockpit just behind and slightly above him), follow his line, and learn his shift and braking points.

It was a relatively quiet day at Fontana, with the Dual Cockpit (Indy Racing Experience) car circus the only thing going on.  Two cars were running that day, one for Mario and the other for Arie Luyendyk, Jr.  Both machines were then current spec Dallara Hondas, the latter being the naturally aspirated V-8 spec engine good for about 650 horsepower at lots and lots of rpm.  Plus a conventional stick and clutch manual transaxle.  Mario’s car was fitted with sticker tires, and I was outfitted in a full competition kit of an FIA fire suit, helmet, and HANS device.

Climbing into the relatively roomy rear cockpit was easy. However, it felt odd with absolutely no driver controls or instruments of any kind (of course, the ultimate driver control device was seated just a foot or so in front of me).  I like my racing harnesses tight, so I asked the 200 or so pound crew member helping me belt in to really cinch me up – I wanted to feel everything the car had to say.

The crew plugged the external starter into the engine’s tailshaft, Mario flicked the switch, and the hearty Honda fired immediately with a chesty bark.

Mario lit the tires launching out of the pits, and we were heading toward Fontana’s Turn 1.  Barely had the tires hooked up and stopped smoking when he shifted to second, then third, which he revved out quite a ways, then up through the gears, and by the time we cleared Turn 2 heading into the near mile-long back straight, we were cooking.

Those fence posts and light standards started clicking by in a hurry, and pretty soon, we were lining up for Turn, which I’m sure we took flat out, or near it, as I don’t recall any sensation of braking nor hearing the engine rpm drop off.  Or maybe just a hair.  But either way, not much.

Something that’s always caught my eye, and often amazed me, is that coming out of a typical superspeedway’s Turn 2 or 4, Mario tends to let the car drift out toward the wall exiting the turn, and then sort of “flicks” it back straight completing the cornering maneuver. He did it a bit on my ride too.  It’s all very intentional of course, making the most of the apex and a fast exit back under power. While it looks treacherous on television, it appeared and felt absolutely natural from inside the car. Of course, it looks easy with those eagle eyes and smooth guiding hands doing the driving.

The ride lasted four laps, just a couple of minutes actually, but felt like more; I guess because I was beginning to take up on Mario’s rhythm.  I have no clue what sort of lap times we were turning, but he said we topped 200 on the straights, and I’ll admit my pulse and attention levels were peaked about those moments.  But it was great, I knew I was in the best possible hands, and the view was spectacular, the g forces on my body also more than real.

It was clear that the car was running a relatively high downforce setup that day (and probably most of the time) because when my final lap was nearly over, Mario let off the gas in Turn 4 to set up for the pit entrance and the car slowed considerably.  We coasted into the pit, and I felt the brakes, for what I’m sure was the first time.  I’ve driven fast, and in some fast cars, but never like that.  At this place.  In this kind of car.  With this man.

A bit of a circus trick that really amazed me occurred when I asked Mario if he could feel me in the cockpit behind him; I’m a big guy, and couldn’t imagine that my poundage right at his backside wouldn’t translate it way to and through the car’s handling.  He said he can always sense when someone’s in the back seat, so I asked him how much I weighed.  And he nailed it.  To the pound.

Driving and racing like this are no more complex for him than walking a dog is for normal humans, like you and me.  The many miles I’ve enjoyed in Mario’s real or metaphorical right seat demonstrated beyond question to me the difference between a reasonably good but otherwise absolutely normal driver and those who have the superhuman talent, drive, and passion it takes to win 111 professional-level races, all those poles, in dozens of different and differing cars, and a bucket full of championships.