Medford, Oregon’s Gathering at the Oaks car show a success 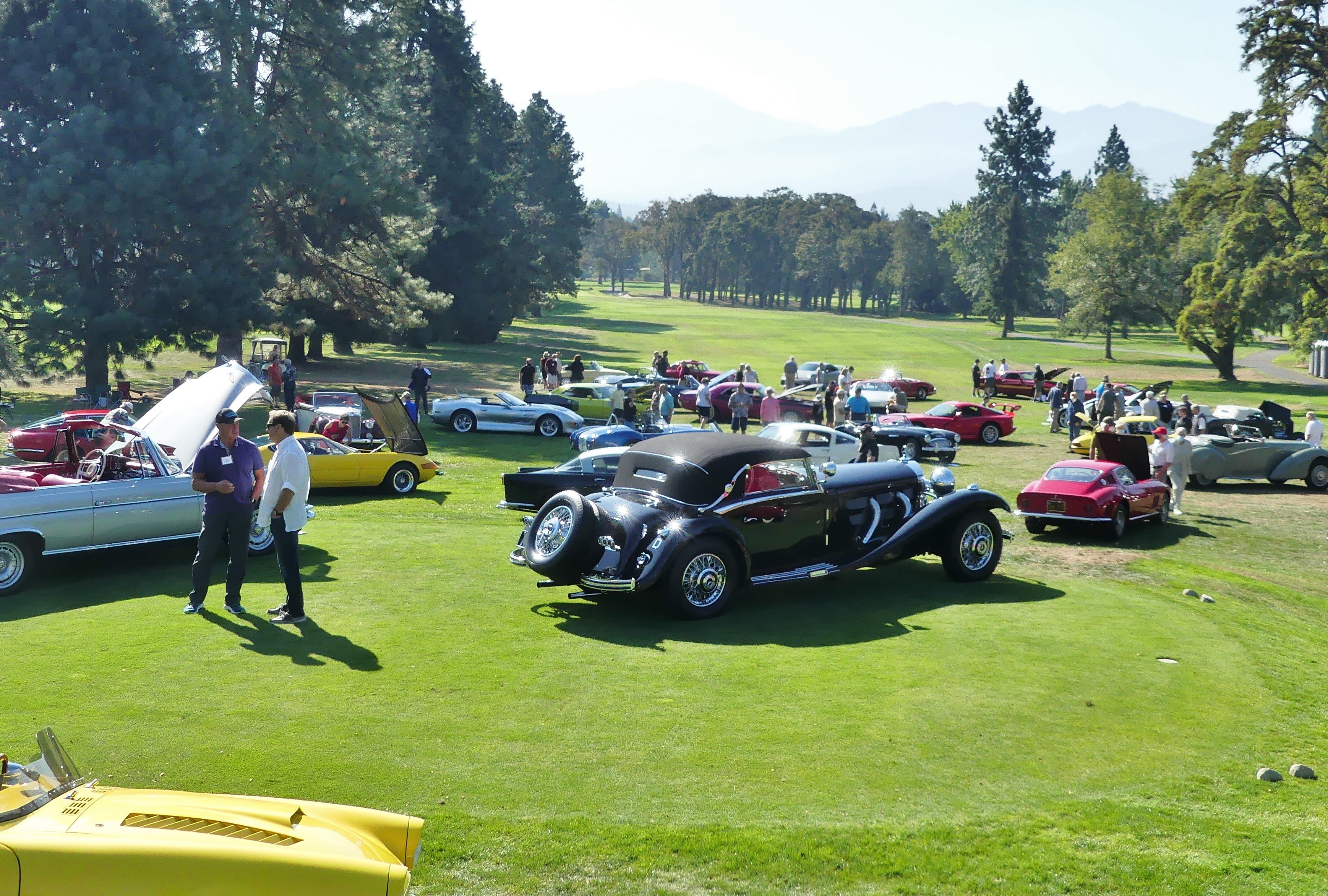 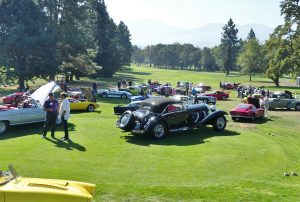 Something for Everyone, including a large and beautiful location. Smack in the middle of this shot is the People’s Choice winning supercharged 1936 Mercedes-Benz 540K A Cabriolet, featuring swoopy elegant Sindelfingen coachwork, of Santa Barbara’s Richard Wolf — as close to a Best of Show vote as anything the day had to offer

Well, they did it.

A group of dedicated, like minded car people set out to put on a great car show at the Rogue Valley Country Club in Southern Oregon, and in spite of Covid, wildfires (or possibly the risk of rickets, shingles, locust, the 40 year flood, and whatever else 2020 could throw at them) pulled it off in fine style.

This program has been in the ideation and planning stages for more a year, and reached and passed a couple of “Go /  No Go” decision points along the way.  Besides all of the Co-19 issues, neighboring Phoenix and Talent, Oregon were virtually destroyed by wildfires less than two weeks prior to the planned September, 20, 2020 car show (at the moment, it’s called a “Gathering” and not officially a concours).  Luckily the fire danger had passed, the sky was blue, and the air was clear. 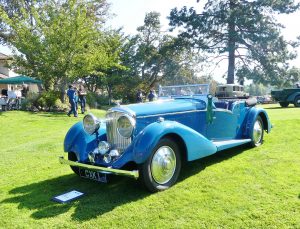 Mouthwatering one-off 1936 Bentley DHC has its sites set on a future Pebble Beach entry, and deservedly so. Brought by Sid DeBoer of Ashland, OR

2020’s Gathering is also referred to as the Second annual iteration, although for all intent and purpose, it was the event’s first real planned happening.  A smaller version of the same group put on a very casual, mostly last minute car show at the same wonderful property last year as more of a Cars N Coffee event held on grass instead of in a parking lot.

However the result and the idea caught the imagination of this hearty group of car peeps, plus several members of the country club’s board of directors, and together they (correctly) decided they had the kernel of something great, thus committing to a long term plan to make their car show into A Thing.  They have no pie in the sky notions of attempting to knock Pebble Beach off the calendar, but felt the area and the community wanted and deserved a high quality automotive experience, committing to make it an annual event comprised of worthy entrants, solid planning, and a significant charity angle. 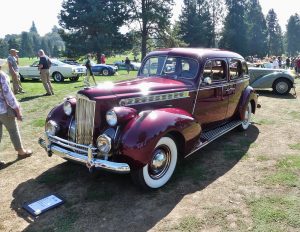 The Terpening family collection of nearby Phoenix, Oregon brought a passel of Packards, all of which proved to be crowd favorites

Given that not only would 2020 be their essentially initial effort as an organized car show, and all of the learning and teething issues that go along with that notion, plus Covid concerns, the organizing team elected to forego most of the accoutrements common to most concours style events — there was no ticket price, gate or entry fee, no judging (and but one People’s Choice trophy) no program, no posters or t-shirts — and at the end of the day, I doubt people really missed these things (although expect several of these items to make the plan in the future) to the point of not attending or not wanting to come back next year.

Instead of a ticket charge, the show asked only optional donations to the Southern Oregon United Way.  Lots of firefighter boots were on hand for coins, bills, and checks — all of which added up to nearly $60,000 for local charities.  So good on them.  Co-19 provisions were reasonable, for this entirely outdoors event.  Clicker-wielding committee members kept tabs on the entrance and exit activity.  Temperatures were taken up on entry.  Mask wearing — not so much. 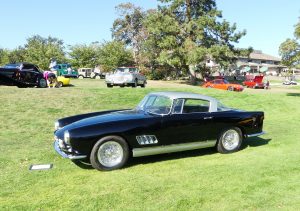 The same Richard Wolf that brought the breathtaking Mercedes-Benz 540K also served up this mouthwatering Boano-bodied 1957 Ferrari 250GT berlinetta — my very personal People’s Choice this day, and the car I most wanted to drive back to LA at the close of the show.  Tight, handsomely proportioned coachwork, the proper 3.0-liter Colombo V-12, and uber elegant colors just had it all for me

The Gathering was an invite-only deal (with the intent of taking it beyond the notion of a run what ya brung cars’n’coffee meet), with a carefully curated and laid out field  that was planned with both physical distancing, and aesthetics in mind.  Entrants were spaced out nicely and attractively to avoid too many contiguous colors and allow plenty room for walking and selfie-making without the field looking thin or whispy, avoiding the “airport parking lot rows-of-cars” look — there are larger events that could take lessons from these folks on how to do it. 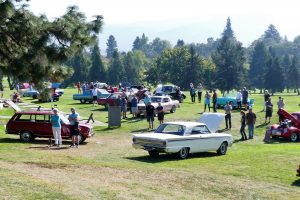 Will they do it again?  I say count on it, in fact those plans are already afoot.  You can keep an eye on future happenings at: https://www.rvcc.com/SOGC/GatheringAtTheOaks 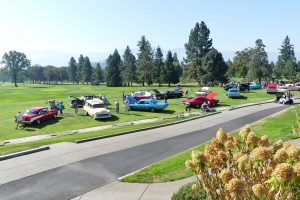 That first experimental event hosted something less than 30 vehicles on the grass; this one this time about double that, with plenty of fairway room for 100.  Or 150.  So expect this show (which is actually named the Gathering) to grow in number, quality, and stature.  All said and done, it was a well done effort by a nice group of organizers and entrants with a common vision, populated by great cars on a perfect day, at a wonderful place.  What’s not to like.

Careful curation of the entry list meant generally high quality cars, ranging from heavy classics and high buck stuff to muscle, rods, and some humble surprises — truly somethings for everyone.  Keep an eye on this event, as it appears to have a certain future.  I certainly plan to go back.  Job well done, y’all.

Thanks to Gathering co-organizer Kirk Gerbracht for the great photos above and below, and you can doubleclick on any of them to see the shot full screen and in high res.  So please don’t go, more photos below… 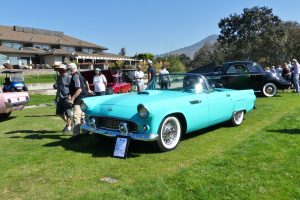 Everybody loves Little’Birds, and no car show seems complete without at least one. And Mary Curry brought this gem of a ’55, standing handsomely on those lovely wire wheels, and resplendent in this vivid blue 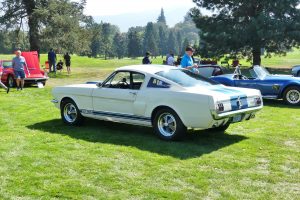 Steve Curry, event co-organizer, and husband of the abovementioned Mary, got hearts pounding with this immaculate ’66 Shelby GT350 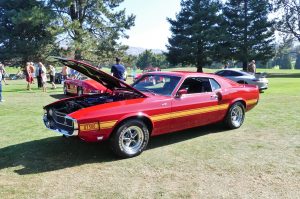 Yeah, we got Shelby. Nothing not to like about this big-block ’69 GT500 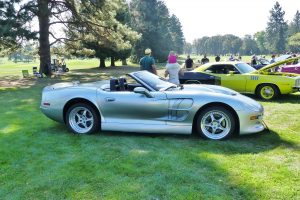 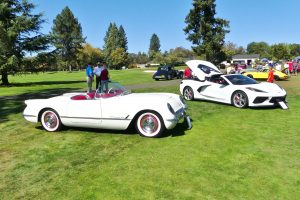 Check out this Then and Now pairing of a 1954 C1 series Corvette, along with the latest and greatest 2020 C8. Both white, both Corvettes, but most everything else has changed 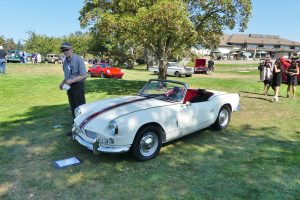 Among the most heartwarming of cars and stories of the day was this immaculate 1965 Triumph Spitfire MKII, brought by the Stone family (no relation to me) who explained that this car has remained in the family ever since one of the Stone brothers’ father bought it new and brought it home back in the day– nice! 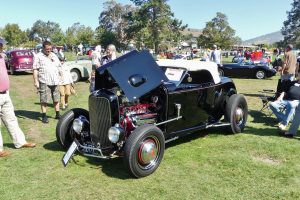 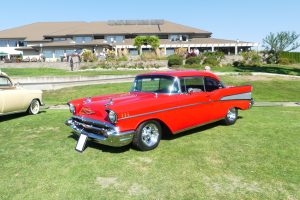 Just as with the 2-seater T-Birds, every car show deserves at least one fine Tri-Year Chevy, and this brilliantly red ’57 filled the bill. Mildly rodded, beautifully presented, and looking just right on its Cragar S/S wheels 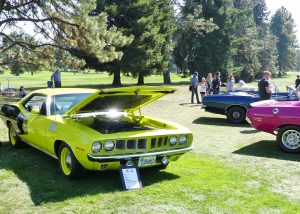 How much MoPar muscle can you fit in one photo? At least three in this example, that would be a ‘Cuda 383, a Challenger T/A, and a Barracuda Formula S convertible 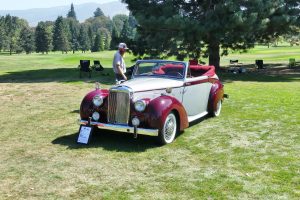 Never seen a British Alvis before? Well, now ya have 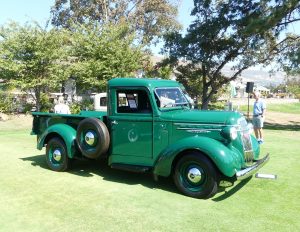 Hey Mack! You may or may not have known that Mack Truck used to build consumer sized pickups — they were cute as this, tough as anvils, and only produced for a couple model years 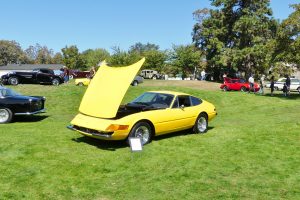 Go Big D! Not D as in Dallas, but D as in Daytona, in this case a Ferrari 365GTB/4 Daytona, another heart pounder for me personally 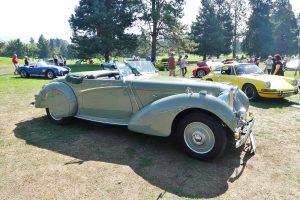 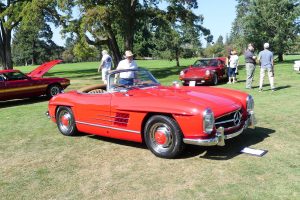 Gullwing or Roadster, a 300SL is never wrong 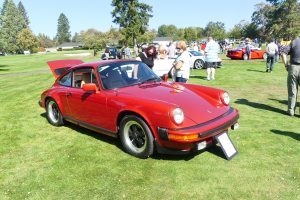 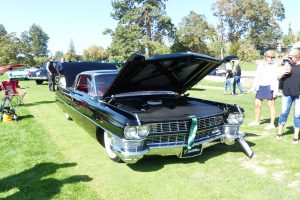 Remember that old cigarette TV commercial slogan (?) —
it’s not how long you make it, it’s how you make it long.” This immaculate mild custom ’64 Coupe de Ville topped 18 feet easy 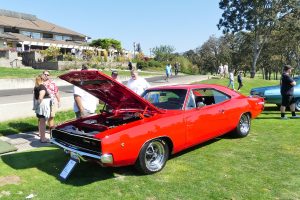 The next time someone publishes a book about how to restore a Dodge Charger, this glistening ’68 R/T should be on the cover. Red, ready, and right 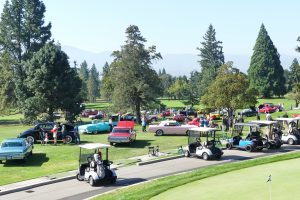 There was no People’s Choice award for the golf karts in the way of a nice photo, but to restate a much overused cliche, a good time was had by all