Driven: CSX2000 — At the Wheel of the First Shelby Cobra 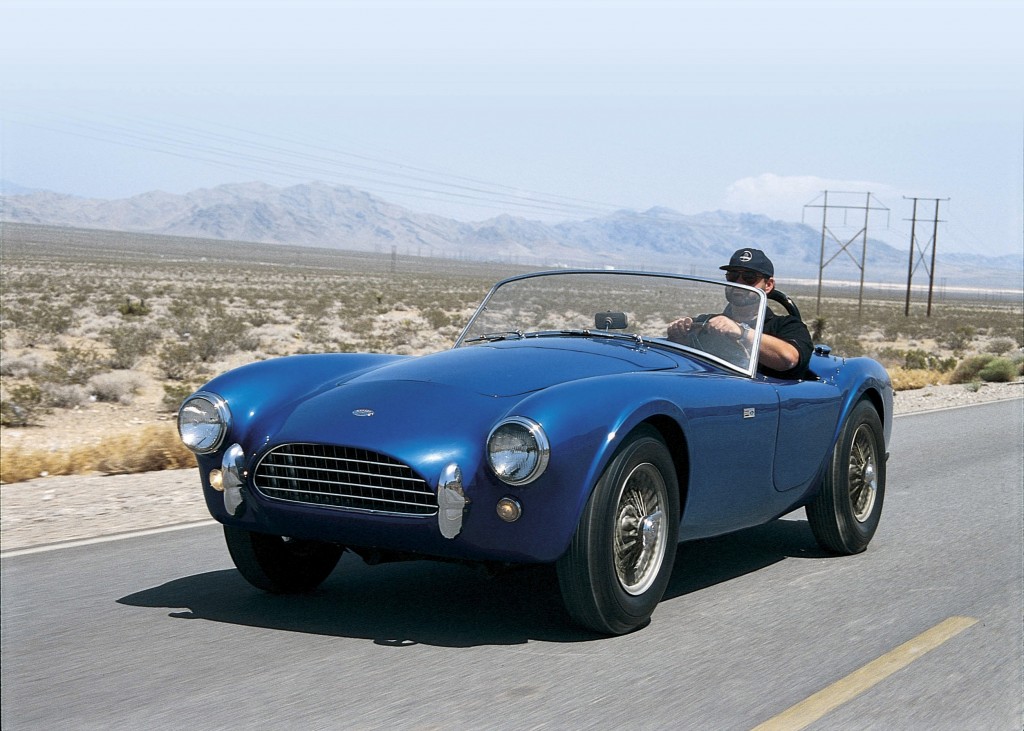 With Carroll Shelby’s recent passing, plus this year being the 50th anniversary of the birth of the Shelby Cobra, I thought you might enjoy this:

It was built by Shelby and a memorable gang of SoCal hot rodders in Dean Moon’s shop in early 1962, as a new Ford small block V-8 was lowered into the empty engine bay of an AC Ace roadster. This is where the whole Cobra thing began.

It was Shelby’s development mule, a show car, a press car; it was on the move all the time in those early days, and was repainted several different colors so people would think there was more than one. Carroll Shelby owned it was born, and it is absolutely not for sale at any price.
CSX 2000 is wonderfully worn, but beautiful in every way. Half the gauges don’t work, though the right turn signal does. All the time. No matter which levers I fiddle with. The car’s thin, wood-rimmed, alloy-spoked steering wheel feels like it’s made of Red Vines. There are shaggy tears in the original leather seats. A crack in the blue paint on the top edge of the dainty, alloy passenger door reveals a glimpse of an earlier coat of yellow. The engine compartment is a bit shabby, the welds on the hand-made headers not exactly NASA quality. Who knows how old these rock-hard, Goodyear Motorway Special tires are; 6.70-15s on the rear, a 6.50-15 on the right front, and a 6.40-15 on the left front — close enough. Some would label CSX2000 as “weathered” or even “thrashed”; others would say it has “patina.” I say it’s fabulously unmolested, and deserves to stay this way.
Turn the key, press the starter button, and the solid-lifter V-8 snaps awake, settling into a slightly cammy, clackety idle. Wisps of blue smoke trail from the 1.5-inch-diameter dual tailpipes, indicating piston rings that were indeed rode hard, put away wet, and haven’t seen much action in the last 20 years. But the little 260 revs willingly, and once running, transforms the first Cobra from a vaunted, horrifyingly valuable museum piece into — as Shelby calls ’em — a sport car. It sounds good. It even smells good; old car smells. Depress that firm clutch pedal, select first with the stubby gearshift, and we’re away.
The engine — plenty broken in by now — revs easily, and speaks the expected, small-block Ford sounds. Each tall gear seems to pull forever. Redline is 5750 rpm, though it’s been to 7000 and more, countless times. We dare not take it there, lest one of those original piston rings decides to help an original piston and ventilate the original engine block — not something I want to be responsible for. But a crisp 1-2 shift at 5000 revs brings a bark of old rubber, and suddenly it’s 1962: I’m Sports Car Graphic magazine’s John Christy, doing the very first article on Shelby’s new creation.
There’s plenty of play in the worm-and-sector steering, but it’s probably caused by the tires. They make the whole car feel squishy. But considering that at least two of them were put on the car when JFK was in office, I’m just happy they roll and hold air. Better not push the handling thing. No such problem with the brakes however; the unassisted four-wheel discs, inboard at the rear, require a firm shove with the right foot, but there’s plenty of stopping power. And little dive or squat either. No computer-aided designed, electronically managed suspension system here; just transverse leaf springs, and worn out shocks.
Let’s go through the gears again. That tall rear-end ratio lets the Cobra roll at freeway speeds in second, and comfortably in third. Fourth feels like an overdrive; imagine what this combination of flexible V-8 power and light weight would be able to do with drag strip gears. The engine’s hardly smoking at all now, after a bit of a workout; maybe there are some rings left in there after all. Another 1-2-3-4 run — at nearly redline this time — amid much whooping and hollering from both myself and passenger, former MT Editor-in-Chief C. Van Tune. Though it wouldn’t much impress a Viper or a Corvette these days, the Cobra is fast — way fast — when viewed from through the eyes of 1962. And none-too-shabby even today; it should still crank out a 0-60 in about 5.0 seconds.
The ride is relaxed, and the feeling from behind the wheel is not unlike that of my own Sunbeam Tiger — no surprise in that it too is a British roadster with a 260 Ford V-8, and enjoyed having Carroll Shelby as a founding father. But the Tiger is luxurious by comparison, although the Cobra has more legroom, and a more athletic feel.
As I drove CSX 2000 through the Nevada desert on this hot summer day, I had to wonder: how many road tests has this car been through? How many burnouts, quarter mile runs, speed shifts, and doughnuts has this poor baby laid down (on its original engine and trans, remember)? How many Corvettes has it hosed the highway with, on yet another midnight prowl? How many books and magazines has this single little roadster appeared in or on the cover. How many of my journalistic forbears — including some of the greats of this business — and movie stars, race drivers, engineers, and other hangers on, have worked it through the gears “just one more time,” with a smile on his or her face?
Hard to say. I’m just damn glad to have been one of them.