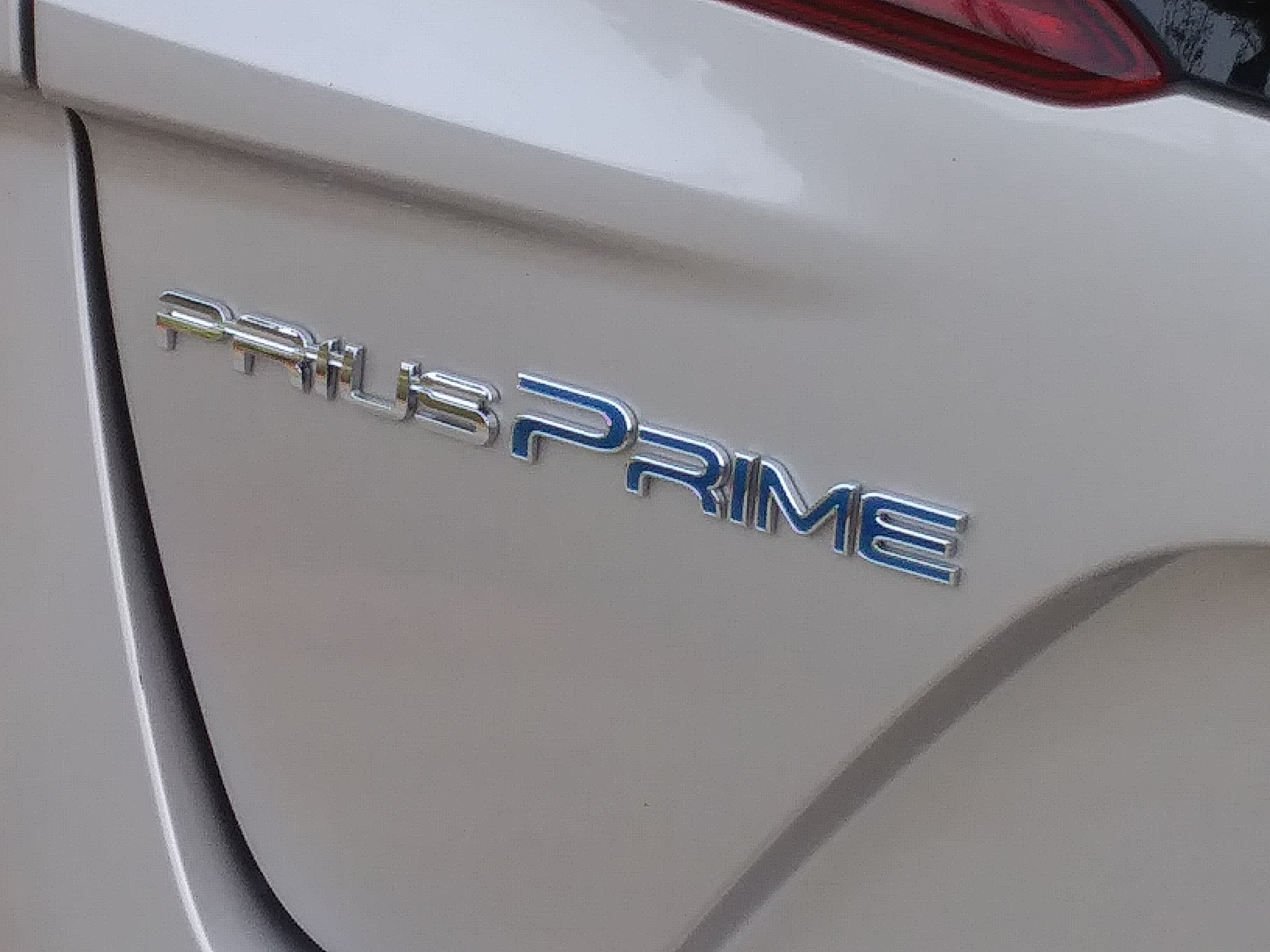 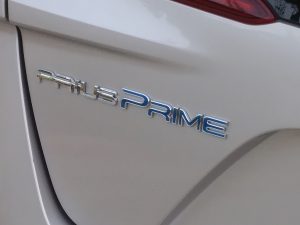 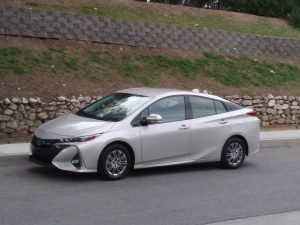 Everyone has opinions about Toyota’s Prius Hybrid; some love them, some revile them as the killers of all automotive fun, or accuse their owners of being arrogant — which to me is all BS.  I’ve owned one — a second gen 2005 model that we bought new — and it was a marvelous car, that lived up to its mileage and green emissions, and quality promises.  I have always believed that a hybrid is a good “bridge strategy” between a pure internal combustion vehicle, and a pure electric.  Of course now there’s something that’s somewhat in between, that being the PHEV, or Plug-In Electric Vehicle, or Plug-in Hybrid. 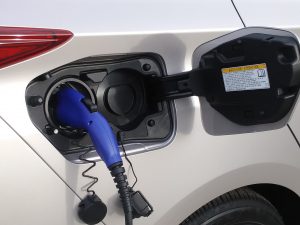 The new Prius Prime is just one such car, which as you know, gives you a certain range of pure EV running prior to switching to a battery assisted gas engine mode.  In the case of the Prius Prime, the EPA rates the car at 55/53/54 City/Highway/Combined, which I had no trouble equaling or bettering. 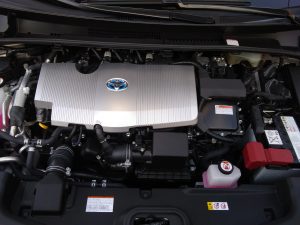 The MPGe rating is 133, and although I did get the car deep into the 60s actual mpg (imagine that!), I didn’t get near this somewhat mythical MPGe number, but didn’t particularly try either.  The pure EV range is 25 miles, again which I was able to equal easy enough. 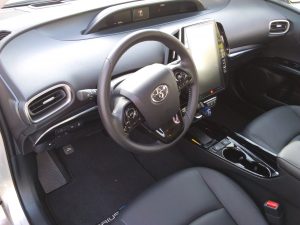 I was anxious to sample this machine to understand how the Prius has evolved since ours of a gen and a half ago.  When the car arrived, I was pleasantly shocked at how many features it had that weren’t even offered in ’05, such as leather upholstery, a moonroof, beefy alloy wheels and rolling stock, and myriad other details not to be had back then.  Now a much more complete car.  The design has also evolved a lot too, you may or may not love it, and actually I think its really cool looking as a bit of a George Jetson-inspired tech piece, but the interior and cabin have evolved manifold.  The materials are better, there’s much more insulation, so the car is much quieter in terms of lower road rumble from underneath, and also in terms of greatly reduced wind noise — because the current funky styling job is driven my max aero efficiency, and it works. 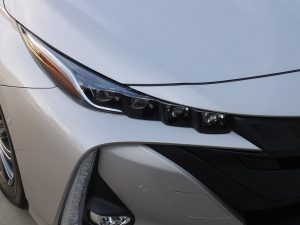 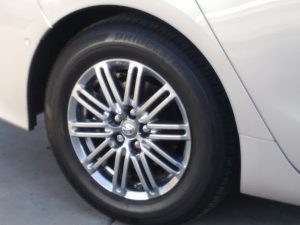 The all LED lighting clusters are fabulous, and the infotainment/nav screen is the most sophisticated I’ve ever seen.  Large, bright, clear, and totally by touch, it tells you everything you’ll ever and never want or need to know about configuring the car for max performance or mileage.  And the nav is also world’s best level stuff.  Large, bright, fast, and easy to program all with great connectivity.

For some reason everyone seems to think of hybrids as slow.  In most cases, not the case, because the electric motor delivers its biggest hit of torque right off the bat from zero rpm.  This is why in the case of most hybrids, the City mileage rating is often higher than the Highway rating, because the electric motor can do its most and best work around town, and away from stop lights.  This car isn’t just quick, its borderline fast.  Punch it from the light, and it’ll spin the tires.  The electric motor hits hard and launches you away from that light, or up an onramp, with alacrity and confidence.  Plus now the integration and phasing back and forth between pure EV mode, pure gas engine, and EV assisted gas engine is far, far, far, much much much smoother than in previous gen Priui, which often tended to “motorboat” a little between modes.  The CVT transmission is also smarter and better calibrated. 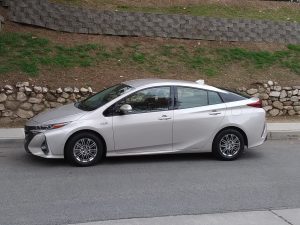 This car is comfortable, quiet, easy and fun to drive, and delivers phenomenal mileage.  And its nice to now be able to enjoy things like heated/cooled seats, leather trim, back up camera, and all the other tech features not available in the early models.  Wife Linda is a confirmed hybrid driver, now on her second, and there’s a distinct possibility that a Prius Prime will be her third. 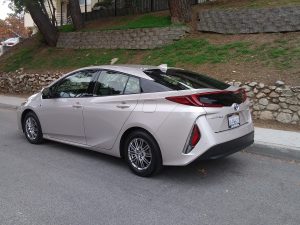 I really can’t find anything worthy of mention to fault or gripe about this car, other than the factor that plagues most PHEVs, in that the pure electric range isn’t high enough to  completely justify the cost of all the technology it takes to get it.  It’s important to understand that the engineers who design all this stuff are trying to balance battery and motor life, with warranty costs, and vehicle weight and all that stuff, but honestly, they could hit the batteries a little bit harder to extend the PHEV range enough to make the proposition ever more compelling.  Of course all of this technology evolves by the minute, and its my estimation that future PHEVs will continue to improve in this area.  Still, even with the relatively modest pure EV range, the overall vehicle mileage is phenomenal and saves a ton of money on gas.  So it works for me, and I suspect will work for you if you want one. 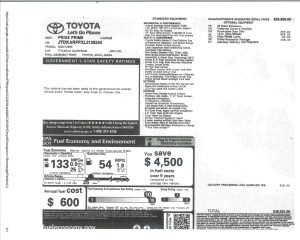 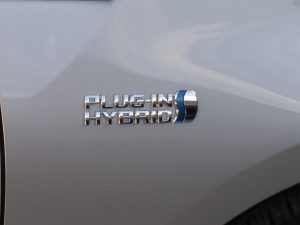 Job well done Toyota, for innovating, and for continuing to improve the breed.