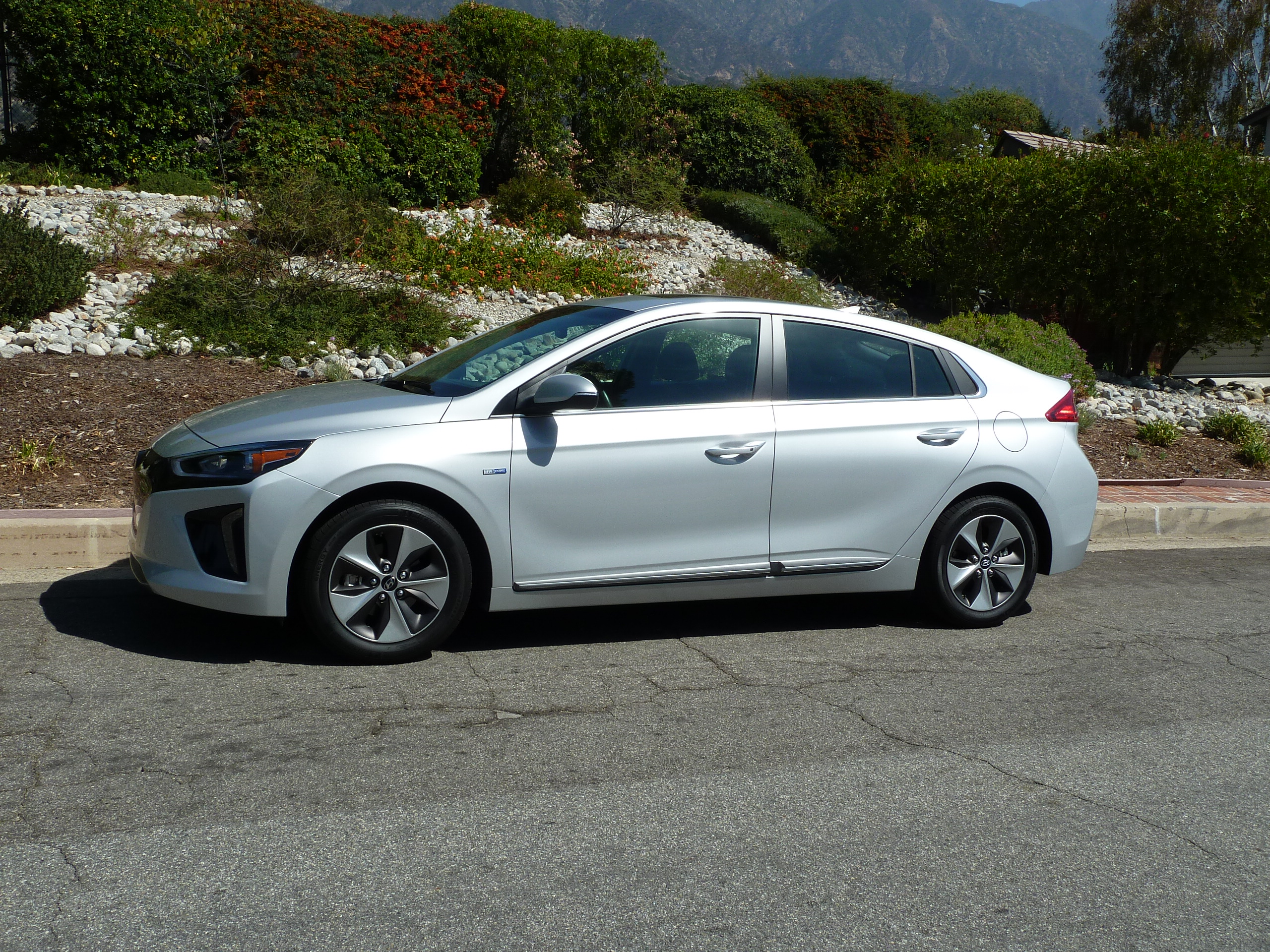 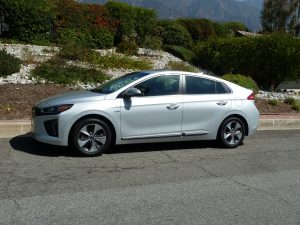 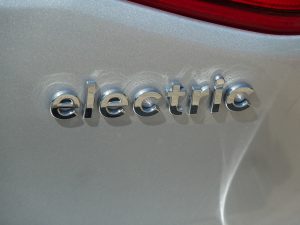 Among the many brilliant product moves Toyota has made over the years, one of the smartest and most intuitive is that the Prius model (and subsiquent lineup) has always said “Hybrid.” It’s no accident that you can’t buy a Prius that isn’t a hybrid of some sort, as there are no purely conventional gasoline powered Prius models. Then along came the Prius Plug-In Hybrid, the smaller Prius C, and other variations. Which means in the minds of car buyers, Prius = Hybrid. 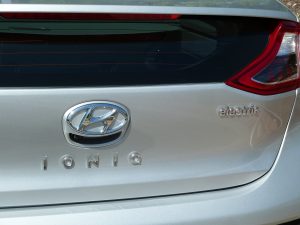 Hyundai, also being equipped with some rather brilliant folks, picked up on Toyota’s methods here with the Ioniq, but goes the Prius one better; in that you can choose between a conventional gas/electric hybrid, a plug -n hybrid (PHEV) and a pure electric (BEV). Once again, there is no “conventional” pure gas-only version of this handsome compact hatch sedan. I’ve not driven the standard non plug-in hybrid version of it, although I’m told by someone who has that’s its a highly wonderful car, is fine to drive and delivers on its mileage promise.  They liked it so well they bought one. 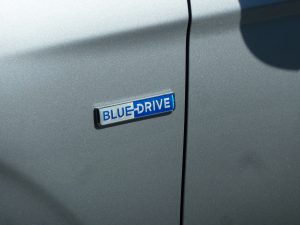 My subject for today is the pure electric Ioniq variant. It’s offered in a fairly base, but still well equipped trim level, plus the Limited and several options in between. My silver tester was in fact a fully loaded Ioniq Electric Limited, with the comprehensive $3500 technology option package added. I won’t break down the entire window sticker here, but you’ll find it pasted below for your review. 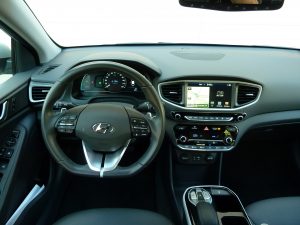 Transmission and shifting couldn’t be easier; no gears and no modes beyond drive, reverse, neutral, and park.  Instrumentation and controls are handsome, easy to use, and logically laid out.

In short this car had everything, with every kind of connectivity and infotainment system opps you can imagine. Again being a pure electric, the EPA rates its mileage and range in eMPG, an attempt to equalize pure electric fuel economy to that of gas engined cars. This one scores solid, highly efficient numbers, with an overall eMPG rating of 136 miles, and a fully charged range of 124 miles. It can be charged on 110 juice, the faster 240 volt juice you find at nearly all charging stations, or you can have 240 installed at your house for the quicker charging.

124 miles of full charge range may not sound like a lot, but depending on your commute or driving cycle habits, it may be plenty. In other words, if you drive an average of 25 miles per day, you can easily go most of a week without having to recharge, or at most just a mid week top off. Even though the EPA only gives iy 124 miles range rating, I was able to drive it past 130 miles a couple times. 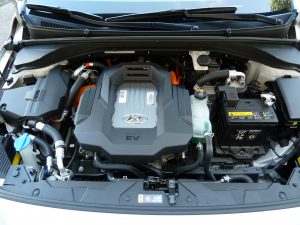 No oil to ever check or change, and no radiator to mess with either. the 88 kW motor spools out the equal of 118 horsepower, but it feels like more, especially with so much low end torque. 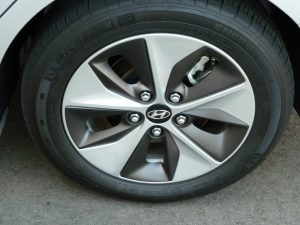 No chintzy 14-inch steel wheels with plastic hubcaps on this car; just nicely sized alloys with premium Michelin rubber, all of which help it ride good and handle smartly too

And its just a jewel to drive; this car wore premium Michelin tires, and being an electric, really gives you a satisfying hit of torque away from a light or up an onramp. You will never feel this car in any way underpowered, I promise you. And the cabin is terrific; I find it more comfortable and intuitive inside than the Prius, and certainly quieter with less road noise and road rumble. The seats offer better thigh support, and it’s plenty roomy inside too. Flop the rear seat down and its got as much cargo capacity as some of the smaller crossover SUVs. The moonroof is nice, and the back up camera, nav, and blind spot warning systems all work just a treat. 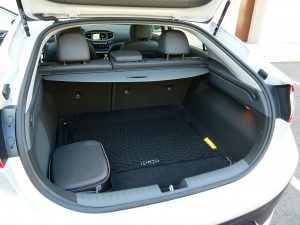 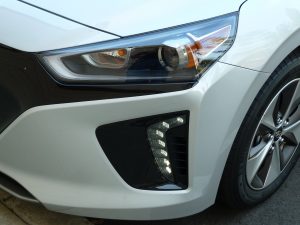 Lots of high tech touches all around the Ioniq, like these nifty LED DRLs

You’ve probably heard me say that when analyzing the type of car that’s right for you, consider “horses for courses.” In other words, pick the right tool for the right job. If you drive 1000 miles a week you may not want an electric car, but if you can wrap charging stops around your weekly mileage, they become much more viable. And of course, there seem to be charging stations nearly everywhere you go, and charging this car up from dead is a lot cheaper than a full tank of gas these days.

The Ioniq is nicely built, feels like quality, and well finished. Hyundai, the company known for big warranty coverage, gives you Lifetime Electric Battery Warranty on the Ioniq too, so you don’t have to worry about some big battery replacement cost lurking in your future. Plus current lease deals on this car are very aggressive, you may get some rebate from your state or on your taxes, and of course your fuel costs will drop to next to nothing by comparison with nearly any gas fueled car you can name. 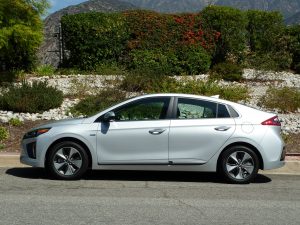 Better looking than Prius to my eyes, but of course that remains a matter of personal taste. And when you blow by all those gas stations, you’ll think it the best looking car in the world…

I would buy this car with my own money if my duty cycle matched the needs and patterns of an electric car. It may in fact be wife Linda’s next car.  And of all the EVs I’ve driven to date, this one is so far the nicest and most complete “real car” — the days of electric cars as science experiments are long gone.  I’d like to see more range, which we know is possible, since the similar Chevrolet Bolt boasts nearly double the range as the Ioniq, but otherwise isn’t quite as nice a car as this.  Stay tuned for my review of the Plug-In hybrid Electric Ioniq PHEV, which is coming soon. 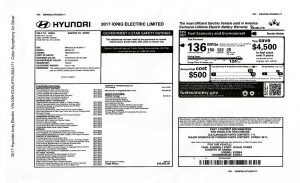 Double-click to enlarge to full screen