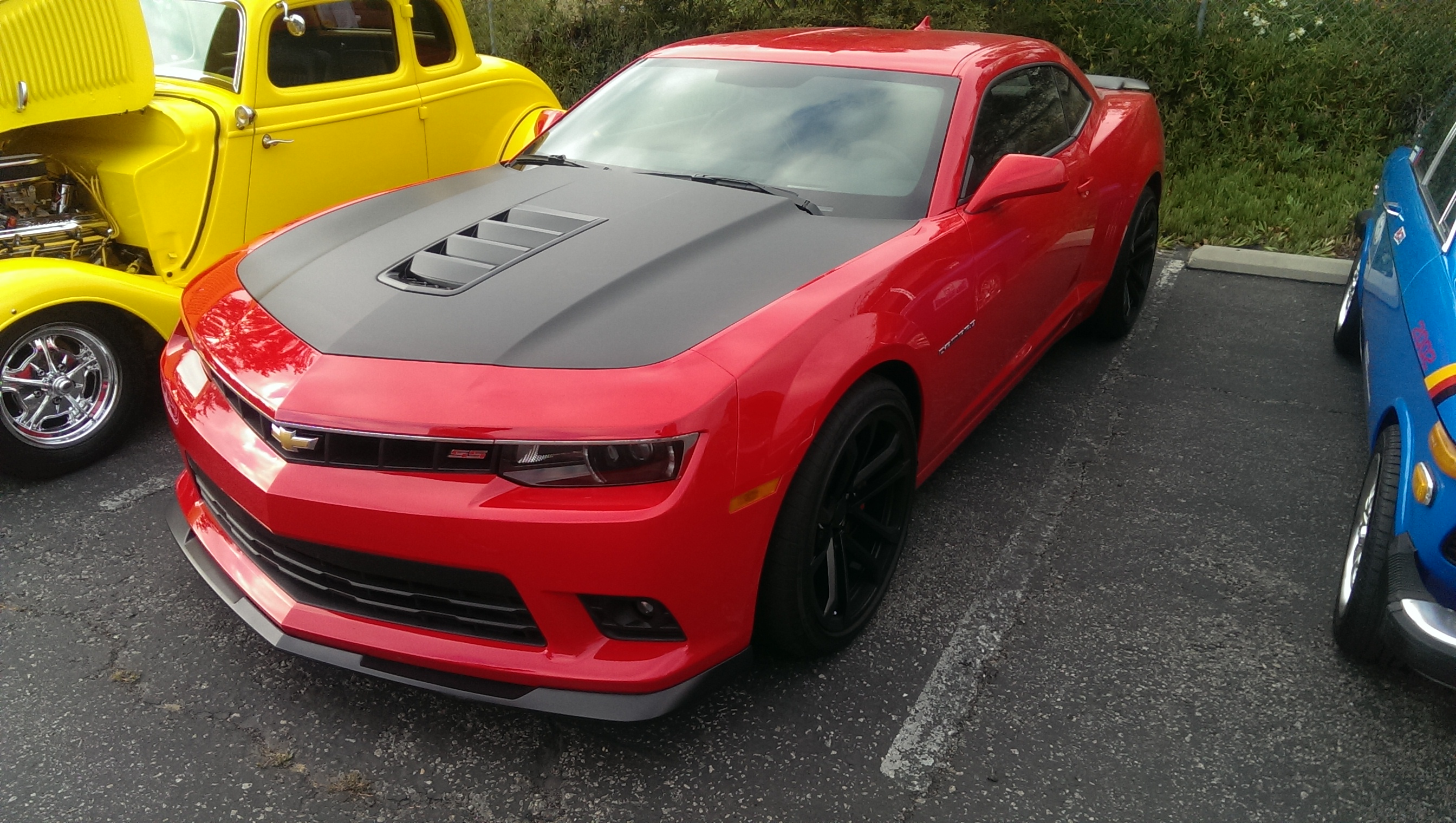 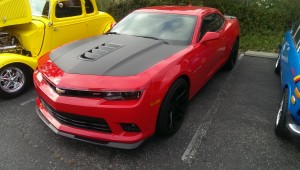 Certainly a hit a my local Cars N Coffee.

As you know, a much revised Camaro is on its way for 2016; the car moves from its previous Australian Holden based chassis architecture to another global GM platform which will make it easier to produce and offer more flexibility in terms of options and technology, and I think the new car will be a few pounds lighter too — no bad thing.  So I decided one last blast in the 2015 would be a good idea.  And it was. 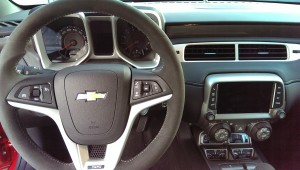 When the current gen Camaro came out, I liked it but was let down by several aspects of it.  The interior was suffered from cheapoplasticity and IMHO was poorly designed .  The ’69 Camaro inspired face came out looking a little Tazmanian devil to me, and those ugly tailights.  But as GM often does, things get fixed as the car matures through its product cycle, and in this case Chevrolet gave the cabin and front and rear fasicas tuneups along the way, and all to the better to my eyes. 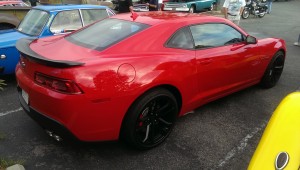 My “Red Hot” over black tester was dazzling to look at.  Big red paint, lots of matte black trim, monster rolling stock, freshened face and taillights.  The body envelope was always handsome, and these updated front and rear end treatments finally made it look great.  And all the right stuff is otherwise found where it belongs, like that fabulous 6.2-liter  all aluminum V-8 up front, good for a burnout worthy 426 horsepower, backed by a 6-speed manual transmission.  Massive brakes.  Spoilers front and rear.  High quality interior now too, with great looking and very comfy seats.  High performance suspension all round.  And up to date nav, tunes, and connectivity.  I’ve included the window sticker and GM’s fact sheet just below so you can see all the detail. 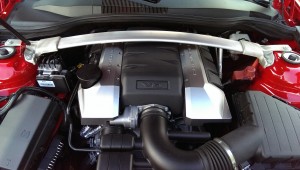 Nobody in the world does a big overhead valve V-8 better than GM. They can call it anything they want, but to me its still a Small Block Chevy and they are now better than ever.

Even at 426 horsepower, the SS isn’t the highest performing Camaro in the lineup.  There’s the supercharged ZL1, which is fabulous but a bit of overkill. And the spectacular Corvette Z06 powered Z-28, designed as the ultimate Camaro road racer; this things got more development time on the autobahn and Nurbugring than the Kardashian family has had on TMZ.  But crank the starter, and the SS’s LS3 starts with a mighty bark through its four pipe, stainless steel exhaust system.  The engine raps, and burbles, and farts and pops through these fabulous pipes, and it sounds so good that its motor music soundtrack should be PodCast. 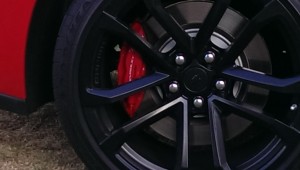 I could give you a very “Consumer Reports” style road test of how this car drive, but that’s no fun.  The moral is that it really hauls buns, with easy 0-60 times well under five seconds.  And goodness goes its fun getting there.  It launches hard, with confidence and a minimal of wheelspin; the rather massive and sticky Eagle F1 tires providing tons of grip.  The stout 3.91: rear gear also means superb low end grunt letting the engine rev up and hit its torque band quickly and with no wasted motion.  Turn the traction control off, and it’ll burn rubber from LA to Montana. 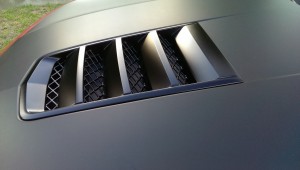 Black hood and business like vent looks wicked. And this piece isn’t just a non-functional bolt on; it actually vents hot built up air from the engine compartment.

The 6-speed tranny is the ideal dance partner too, with a ratio for every need, and a smoth slick shift linkage.  And not only can the camaro run downfield, but it can really cut and thrust too.  It corners with great confidence, quick turn in, a front end that bites and sticks, and very high traction limits.  I didn’t have a chance to run this car on a race course, but a thrilling zip up and down the Angeles Crest Highway convinced me that its a handler as well as a goer.  This tester of course had the uber handling suspension bits to go along with the 20-inch performance rolling stock, and the chassis is stiff and the fully independent suspension capable, and forgiving.  You can overcook this car, but be smooth and you’ll be fast.  And I’d be really surprised if you can fade these mondo brakes to the point of no return.  Serious stopping power with good feel and pedal modulation.  You can lean on it, push it, and it’ll stick with you.  And its got so much power that it almost doesn’t matter if you downshifted for that corner, or not.  The mighty “Small-Block” can pull you out and through no matter.  My 40 mile mountain drive didn’t take long.  And its one ton of performance car for the money. 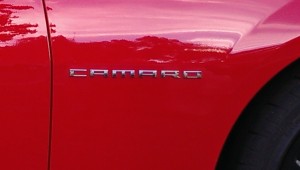 The perfect car? Of course not, no such thing, but picking on little niggles is immaterial. This car knows what it is (a modern old school muscle car that handles) and its damn good at being just that, no apologies needed.

The 2016 Camaro will be a little lighter, and even faster due to its new 455 horse V-8 (yes, same as C7 Corvette).  And similarly equipped SSs will run a few thousand dollars more,   So if you decide you like the current car, want to save a few bucks over the 2016, you won’t in any way be falling short to get the current car, and I’m betting there’s still a relatively good supply of them on dealer lots, with some room to price haggle too.  You won’t be disappointed. 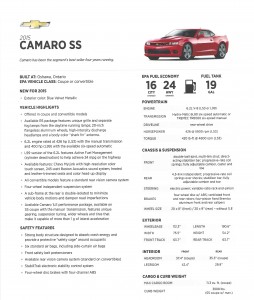 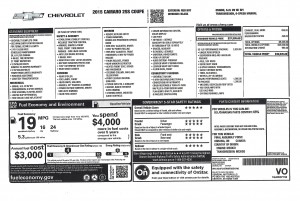