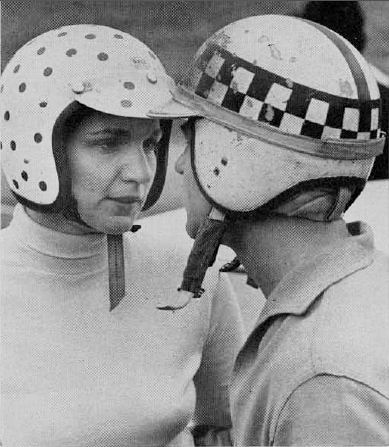 That’s Denise on the left in her trademark polkadotted helmet. A golden spirit who raced during the golden age.

By know you may have heard that Denise McCluggage passed away last week at 88. I knew her for many years, and pretty well. Among many other things, she was a superlative racing driver, competitive skier, and sports and automotive journalist. I won’t recount her entire bio here, as that’s been done now a dozen other places; for a well written piece about her life and career, I suggest you check out this feature from the New York Times: http://www.nytimes.com/2015/05/10/sports/autoracing/denise-mccluggage-auto-racing-pacesetter-dies-at-88.html?emc=eta1&_r=0 — which I’m honored to be quoted in. Denise broke down, or worked around, so many barriers, as a woman in professional sports. If you think back to the 1950s, I’ll bet you can’t name too many pro level female sports car racers that ran at Sebring, Watkins Glen and so forth. She raced during the golden age with so many of the golden drivers: Phil Hill, Carroll Shelby, the Rodriquez brothers, Richie Ginther, Masten Gregory, and Dan Gurney were among her friends and competitive rivals. She was very close friends with Sir Stirling Moss, and another significant lady racer named Isabelle Haskell DeTomaso (yes, she American wife of racer and car builder Allessandro). 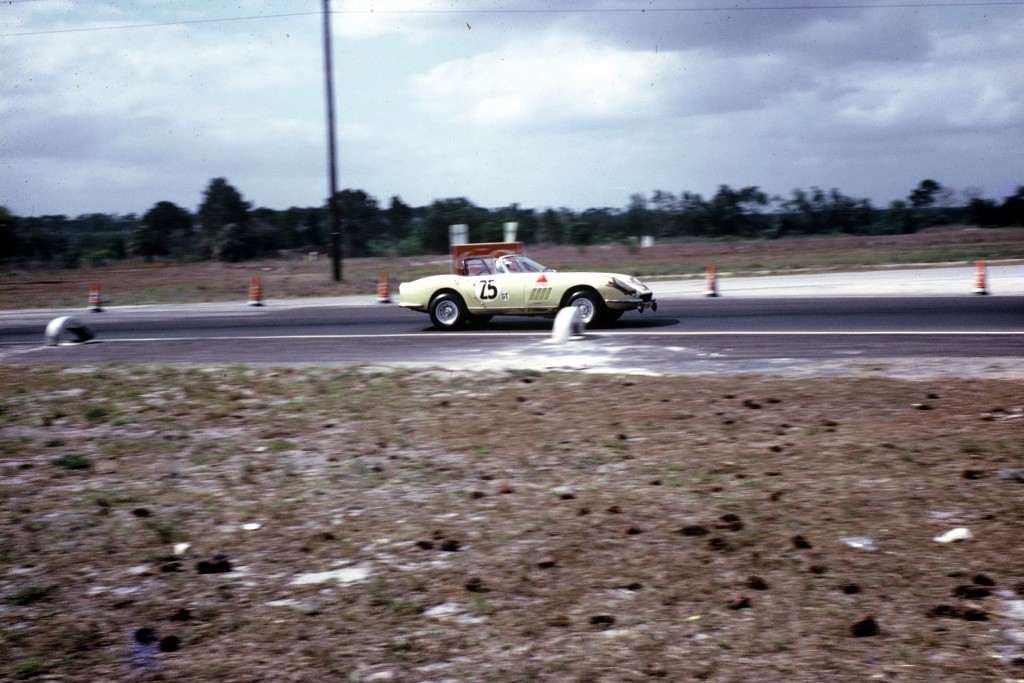 Denise and fellow female driver “Pinkie” Rollo drove this Ferrari 275 NART Spyder to a credible 17th overall and 3rd in the GT class at Sebring in 1967; the same car, repainted a bronzy brown, was later on the cover of Road & Track, and appeared in the original “Thomas Crown Affair” as Faye Dunaway’s character’s ride…nice. John Clinard photo

As a newspaper reporter, she was more than challenged simply trying to do her job, because in many sports, women weren’t allowed in the pressbox. She told me one time that she was assigned to cover the baseball playoffs, and had to buy tickets like any other fan, and had to interview the players by talking to them through the fence. She had similar challenges at the Indy 500 as women weren’t allowed in the pits — imagine that, a woman who had an international racing license, with more than enough talent and experience to run in the damn race, not being allowed proper access to cover it for a newspaper.

Denise drove countless great cars in her life, and seemed to relish them all. She was also among the leaders that launched the Sante Fe (New Mexico) Concours d’Elegance because she lived in that wonderful town and wanted to share its beauty, history, and tranquility with others. Denise and I many times judged together at Pebble Beach and Amelia Island.  She was friends with Steve McQueen and dated jazz great Miles Davis, and is a textbook example of a large life, lived large.

My favorite Denise story tells you a lot about her ability as a driver, even well into her seventh decade. I went to the media ride and drive launch program put on by Mazda for the updated MX-5 Miata that came along in the mid-1980s. At the end of the day, after the marketing and technical presentations, lunch, and a long on road drive, Mazda hosted a casual autocross for the attending journalists. Many of the guys there are great drivers; young testosterone-addled bucks who could really pedal. Everyone thought the battle lines would be drawn between rival magazine writers: the Motor Trend guys vs. the Road & Track editors vs. Popular Mechancs and Car and Driver, etc. Guess who beat us all: the short, slightly portly older lady with the gray hair. Most of Miatas just attacked the cones, with engines revving and tires squealing. But not Denise; she drove through that gymkhana course with no more drama than if she were at the mall looking for a parking spot; smooth as glass and not putting the tail out once. Like the great Sir Jackie Stewart says: Smooth Is Fast.

If you’d like to further enjoy Denise’s talent for writing and passion for cars, pick up her book called “By Brooks too Broad for Leaping,” an enjoyable compendium of her AutoWeek magazine columns. It gives you a glimpse into her greatness. I will miss her brains, talent, humility, big smile, warm greetings, and sense of humor, and it’s my honor to have known her as a friend.