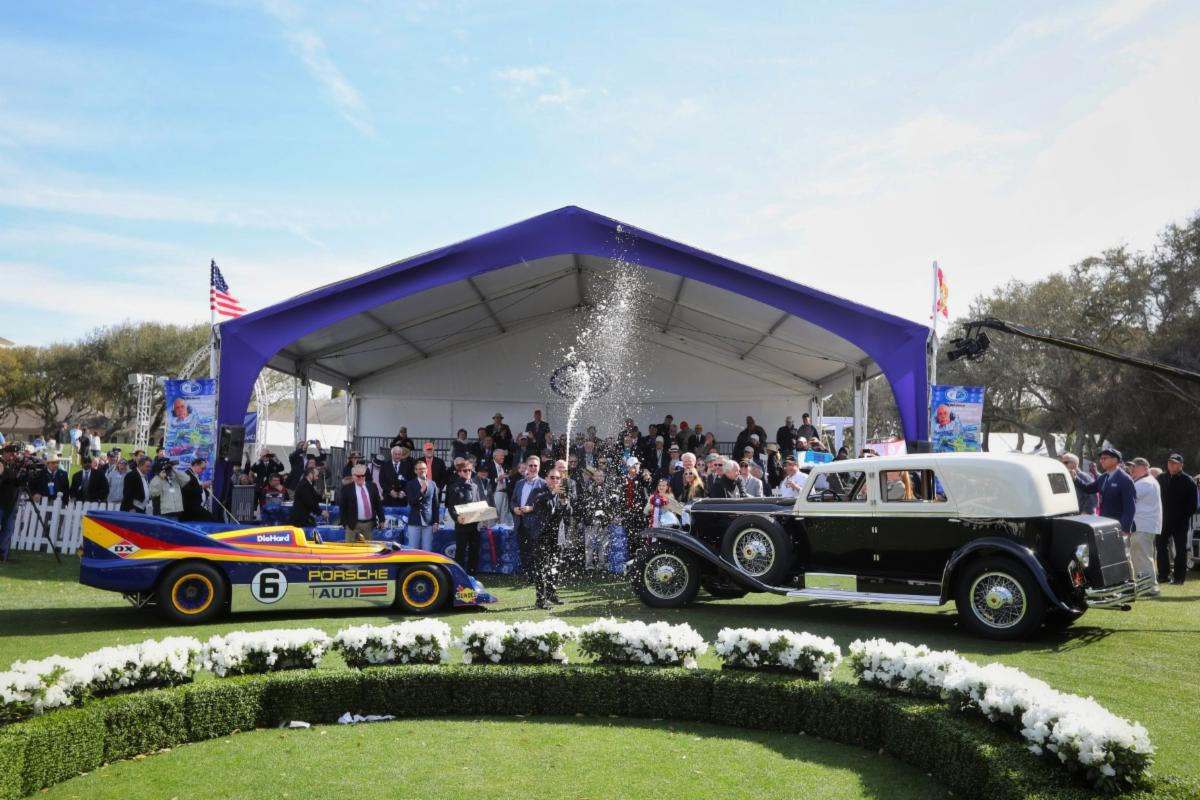 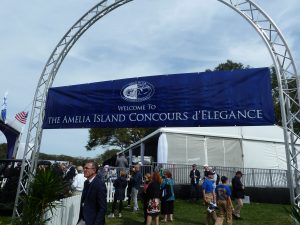 The annual Amelia Island Concours d’Elegance is among my very favorite automotive events in the world.  So many things make it special.  It’s held at a Ritz-Carlton Resort on the beach in Florida, so let’s talk venue. 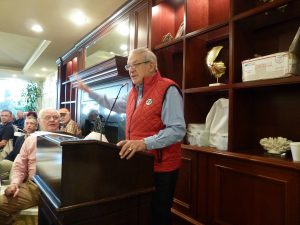 Everything good about the Amelia Island Concours stems from the good karma generator that is Chairman and Founder Bill Warner, here as he addresses out judges meeting

Founder and chairman Bill Warner is a vintage racer in his own right, and longtime professional racing photographer (Road & Track, Sports Car Graphic) so Amelia pays much more than passing recognition to sports cars and racer people and cars.  2020 represented Amelia’s 25th anniversary, and it was another one for the books.  Besides the big show on Sunday, there’s the best you’ve ever seen CarsNCoffee gathering on the show field Saturday morning.  Plus Amelia always recognizes a motorsport Honoree; many have been famous drivers, including Carroll Shelby, Dan Gurney, Hurley Haywood, Al Unser, Johnny Rutherford, Sir Stirling Moss, and a dozen others; all of them names you know and respect.  This year’s honoree began his intergallactic motorsports career as a driver, and has since gone on to become the winningest Indy 500 team owner, and the chieftain of a business empire that spans the globe and employs more than 66,000 people, he of course being the incomparable Roger Penske. 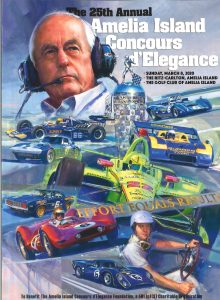 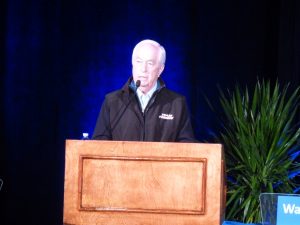 The Captain was there with several of his key staff and drivers over the years, a remarkable number who have worked for him for decades and still do.  Mr. Penske spoke at several gatherings and occassions, and made himself available for countless autograph signings and selfies.  There was an entire non-judged class of cars he’d driven as a driver, and built and raced, including a half dozen previous Indy 500 winners, an IROC Porsche, Can-Am cars, Trans-Am Camaros, and other Penske Racing faves.  This man is 83 years old, “older gentleman” model handsome, sharp as an X-acto knife, and can outlast any Energizer Bunny.

Something else that sets Amelia apart in terms of “classic” concours fields and its racing roots is that Amelia awards a “Concours d’Elgance” best of show for more traditional classic and collector cars, plus a “Concours d’Sport” among particularly sporty and racing cars.  This year’s winners proved a particularly worth duo of poster children… 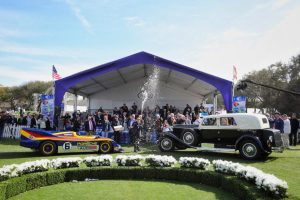 A 1929 Duesenberg J-218 Town Limousine and 1973 Porsche 917/30 Can-Am Spyder were crowned this year’s Best in Show on March 8, 2020 at the 25th annual Amelia Island Concours d’Elegance. In celebration of the event’s Silver Anniversary, the concours featured a special “homecoming” of alumni honorees.

Here’s my own personal scrapbook of Amelia 2020…which I hope you enjoy.  And feel free to doubleclick on any image to see it full screen in high res… 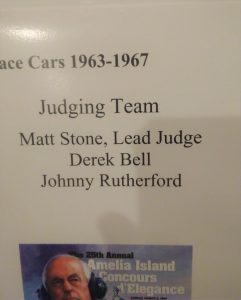 So how’s this for a judging team; I felt like the tail wagging the dogs having to lead a 3-time Indy winner and a 6-time Le Mans winner around the field to judge racing cars. 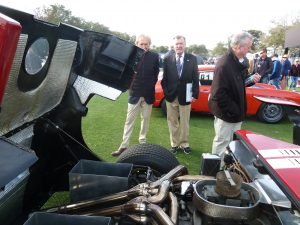 Not the greatest grabshot about which I’m sorry. Bell, left, and Rutherford, middle, are about the coolest dudes you could ever hang with and really know cars, making solid observations and greatly contributing to the judging discussion 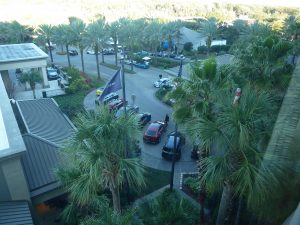 The forecourt at the Ritz becomes a ride and drive Disneyland — wanna drive a new Mercedes-Benz AMG model, a Porsche, a McLaren — this was the place and your chance 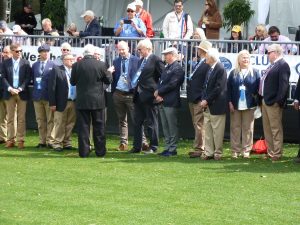 Among the more amazing things that the incomparable Chairman Bill Warner (at middle-left, back to camera) does is to introduce every judge, more than 100 of us, by name and vocation–strictly from memory. I luv this guy 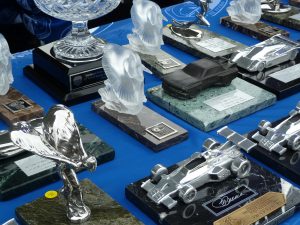 To The Victors Go the Spoils. The trophies and awards at Amelia are first class-plus, high quality, custom cast and designed pieces that any car owner would want on their mantle 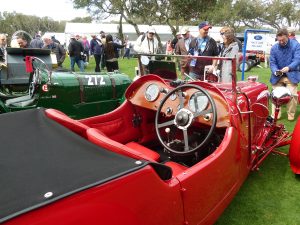 Something for everyone to enjoy at Amelia, from early road cars to historic racers. The cars and bikes are easy to get up close and personal with and really get a good look 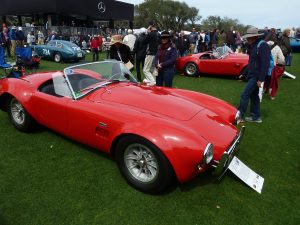 How many red Cobras can you get into one photo — at least two this time! 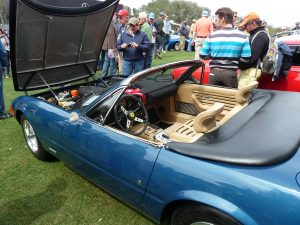 This Azura Metallizato over biscuit Daytona Spyder made me weepy. Uber Elegant, and sounded like magic 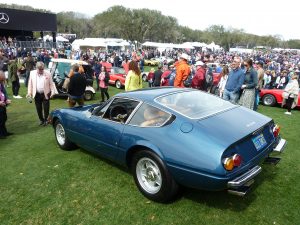 Don’t fancy a Spyder? Well this Daytona Berlinetta will always be welcome in my garage 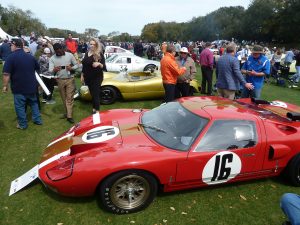 Here’s a brief taster from my judging class, that being racing cars 1963-67, including an IndyCar, two GT40s, several Porsches, and more tasty stuff than I could drool over 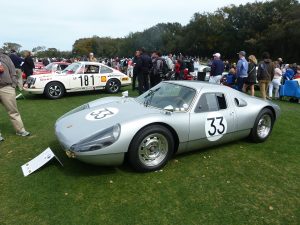 Two uber tasty pieces again from my class are this still vintage raced Porsche 904 GTS, and the all real ’67 911R rallye racer just behind it 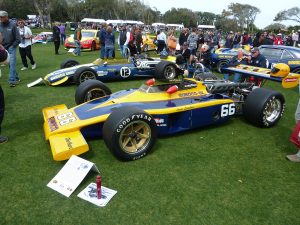 Roger Penske brought out a fleet of his own stable, including this Donohue 1972 Indy winner, plus two dozen more Penske stable cars sitting all around it 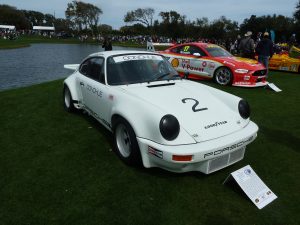 Mark Donohue’s IROC season one championship winning Carrera RSR…I’m writing a book about this season and these cars, watch for it next year 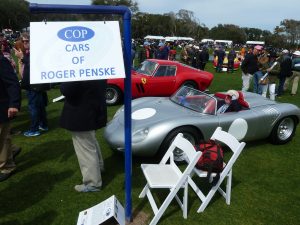 Roger Penske began his racing career in this Porsche Spyder, and also raced the Ferrari 250 GTO sitting just behind it 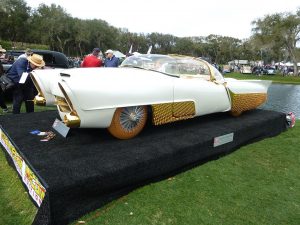 The somewhat incomparable Golden Sahara showcar; tasteful…maybe not, but dazzling in all its hugeness and gold platedness…certainly 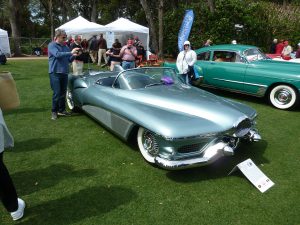 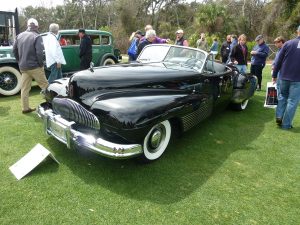 For my money, GM’s two most signficant ever concept cars, the Buick LaSabre at left, and the (also) Buick Y-Job on the right.  Parked side by side — I needed oxegyn at about this point. 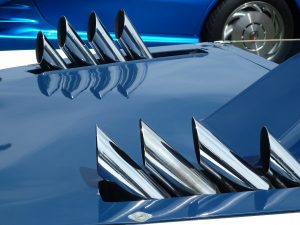 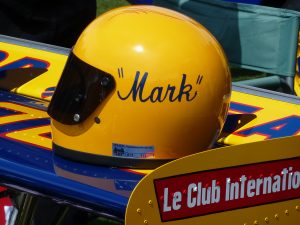 Naturally, with Mr. Penske as the honoree, and with so many of Mark Donohue’s significant cars on hand, the late great was on everyone’s mind 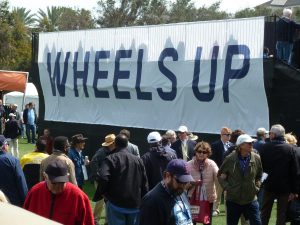 …until next year. Stay in touch with the show at AmeliaIslandConcours.org