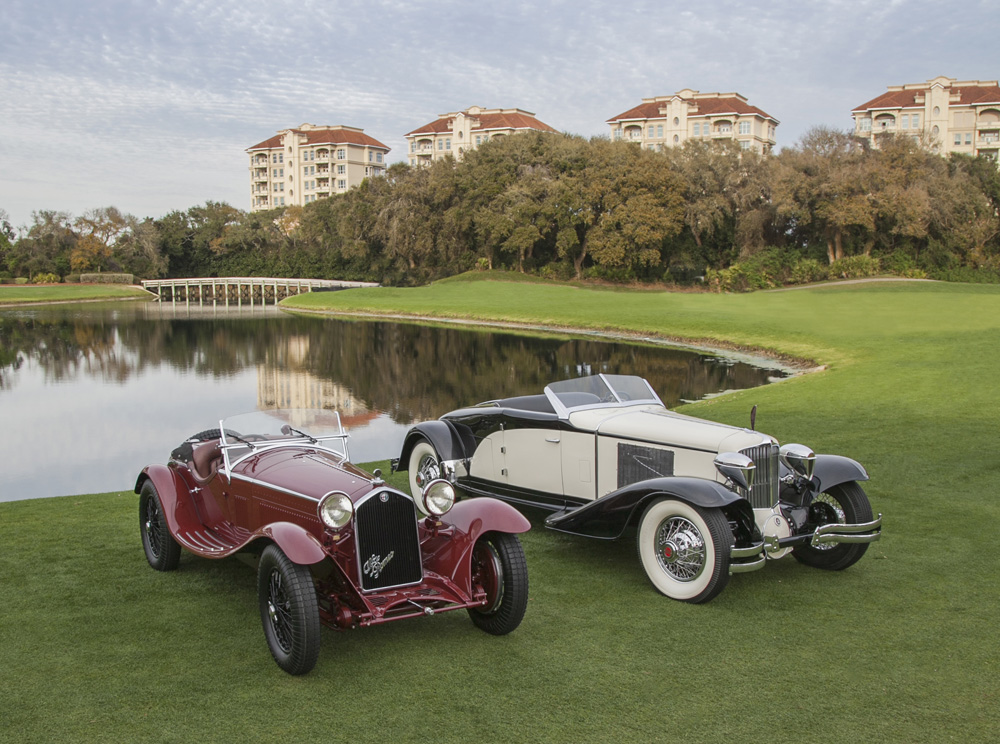 Here’s some news from my friends at the Amelia Island Concours d’Elegance, at which I’m honored to serve as a judge and also contributing writer to the show’s official program. And extra congrats to my friend David Sydorick on his Zagato bodied Alfa for winning one of the Best of Show awards — MS 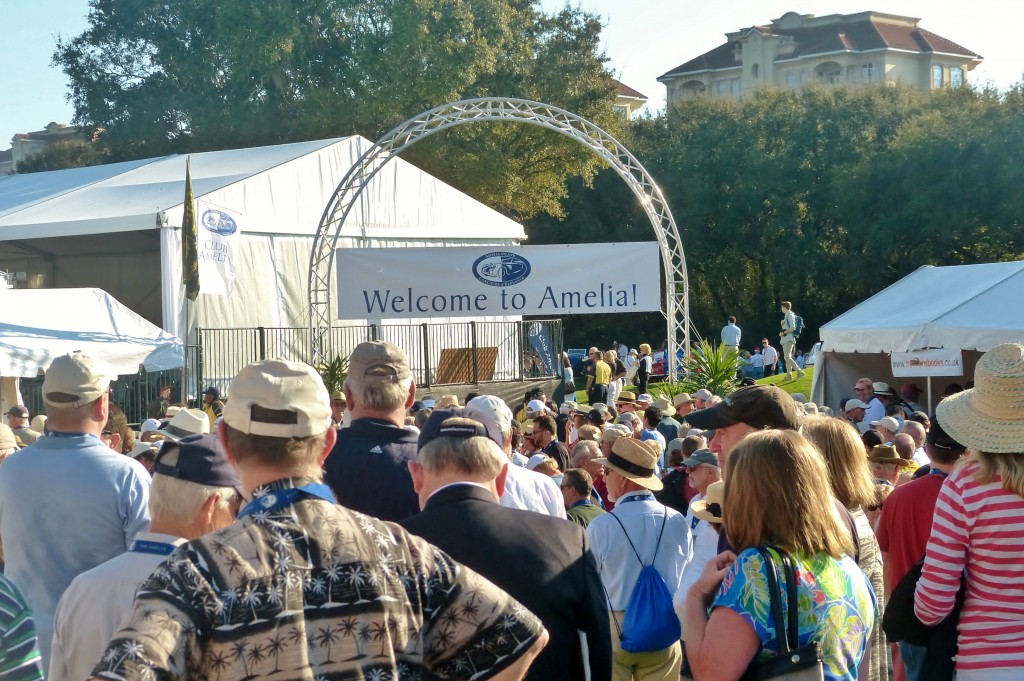 More than 32,000 People and 315 Automobiles and Motorcycles Attend
The 20th Anniversary of the World’s Most Innovative Concours Weekend

JACKSONVILLE, FLA. (March 18, 2015) – The Amelia Island Concours d’Elegance named a 1930 Cord and 1932 Alfa Romeo Best in Show winners on Sunday, March 15, during the 20th annual event which attracted a record-breaking crowd of 32,000 over the course of the weekend. “The Amelia,” known for its innovative car classes, showcased more than 315 cars and motorcycles on Concours Sunday, with the stunning 1930 Cord L29 winning the prestigious Concours d’Elegance award and the Alfa Romeo 8C 2300 taking home the coveted Concours de Sport accolade.

The Concours d’Elegance award was given to the flawless 1930 Cord L29 Brooks Stevens Speedster, which is owned by Ed and Judy Schoenthaler from Oak Brook, IL. This black and white modern-classic was completely redesigned by renowned Wisconsin architect and car designer Stevens who acquired it in 1930. The Cord competed in many driving events including the Copperstate 1000 Rally and several hill climbs and races until Steven’s death in 1995.

The 1932 Alfa Romeo 8C 2300, owned by David Sydorick of Beverly Hills, CA, was awarded the coveted Concours de Sport prize thanks to its outstanding racing heritage and impeccable restoration. The short chassis “two-three” Spyder 8C was introduced in 1931 and won the Mille Miglia in 1932, 1933 and 1934 as well as the Spa 24-hour race in 1932. The car has a powerful Jano-designed straight-eight twin overhead cam supercharged engine. The previous owner purchased it in 1950 with a broken clutch. In 2003 Sydorick bought the vehicle and had Wisconsin-based restorer Rick Bunkfield rebuild the engine in 2005 to make it drivable once again.

“Both the Cord L29 and the Alfa Romeo 8C 2300 are well deserving of the Amelia’s 20th Anniversary Best in Show awards, with their impressive automotive style and historical pedigree,” said Bill Warner, Chairman and Founder of the Amelia Island Concours d’Elegance. ”I’m not sure how our esteemed panel of judges was able to pick just two winners, given the record number of world-class entrants we had at this year’s Concours. I congratulate them on their excellent selections and I hope we can make their job harder in 2016.”

More than 315 magnificent cars and motorcycles from around the world participated in the 2015 Concours, delighting attendees with a remarkable automotive display of style and heritage. This year Stutz was the featured marque. Highlights on the field included the presence of automotive history’s most rare classic models: the BMW 328, a collection of 1940s wood-bodied Chrysler models, the Porsche 914 model in its rarest variations and a plethora of pre and post-war racecars. Also on display were a number of outside of the box car classes such as a rare Orphan Concept class including the 1954 DeSoto Adventurer, “Cars of the Cowboys” highlighting legendary western themed vehicles from TV and film and a “World Rally Car” class. In addition, a “Hot Rods: East Meets West” car class delighted car fans by highlighting the differences between East Coast and West Coast customizers and classic Hot Rod styling. 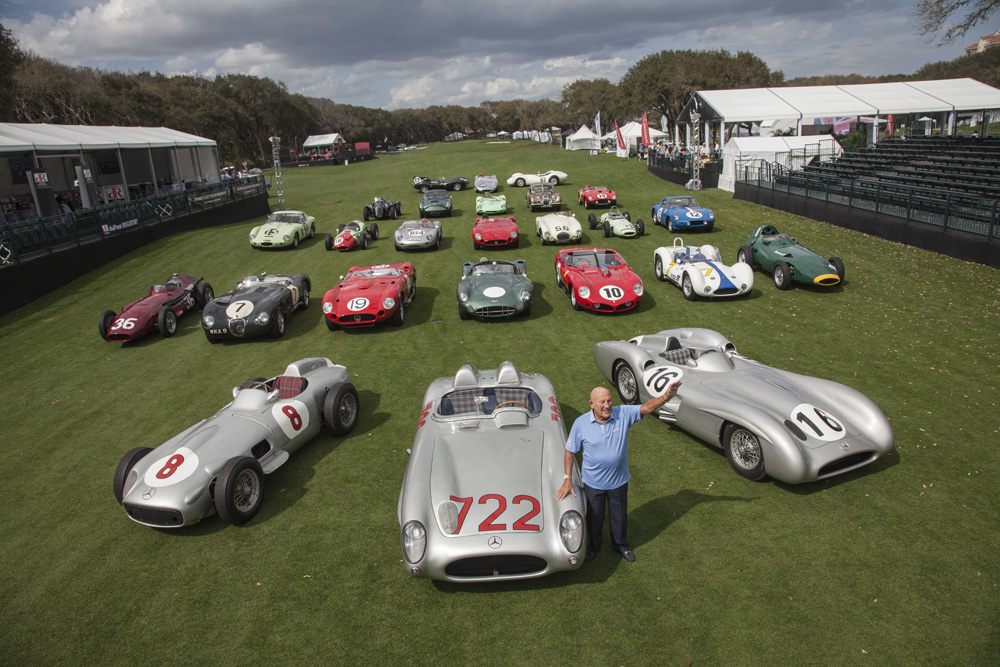 Leading the 2015 Concours was Honoree and legendary race car driver Sir Stirling Moss, who was also the event’s first Honoree at the inaugural Amelia Concours in 1996. Moss was honored for his achievements in motor racing and the tremendous legacy he continues to build upon. In addition, attendees were treated to the presence of over 25 of Sir Stirling Moss’ famous race cars, including the three Mercedes-Benz silver arrows he won with in 1955, marking the first time all three historic vehicles were displayed together. 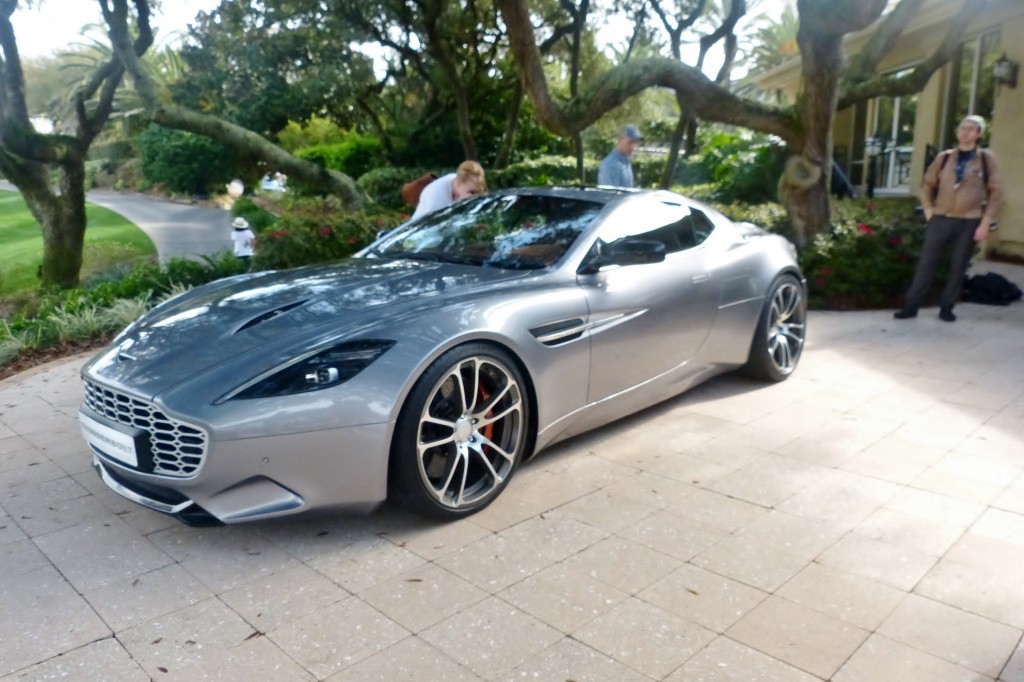 Henrik Fisker was at one time Aston Martin’s chief designer, so here’s his now independent take on the current Vanquish, called Thunderbolt 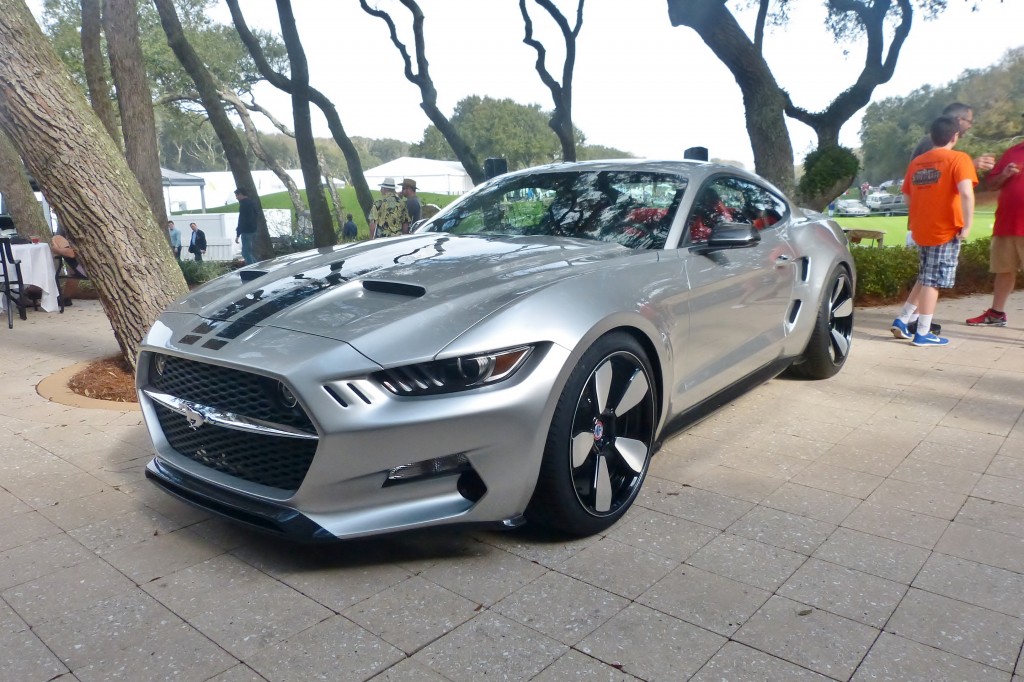 And the same Henrik Fisker’s carbon fiber paneled redesign of the new 2015 Mustang, the Galpin Rocket. With over 725 horsepower, why would you call it anything else?

In addition, some of the world’s most prominent manufacturers and dealers chose the Amelia Concours to debut their latest models and creations. Lamborghini held the North American debut of the company’s newest and fastest super car, the Aventador LP 750-4 Superveloce, following the vehicle’s global debut at the Geneva Motor Show earlier this month. Galpin Motors and Henrik Fisker also held the global unveiling of Fisker’s stunning GT Coupe design study, “Thunderbolt,” based on his personal interpretation of the Aston Martin V12 Vanquish Coupe. Galpin also displayed the production-ready version of the Mustang “Rocket,” which debuted at the 2014 Los Angeles Auto Show.

Attendees also enjoyed two seminars, a tradition that has become one of the hallmarks of the Amelia Island Concours. The “Design DNA of Iconic Cars” seminar included designers from General Motors, Mercedes-Benz and Porsche who spoke about maintaining each brands’ DNA. The legendary Buick Y-Job, America’s first true concept car and the Buick Avenir Concept were on display to enhance the seminar. In the seminar moderated by Tommy Kendall, Wayne Carini, Ray Evernham, Peter Klutt, Barry Meguiar, Bob Scanlon and Dale Walksler lead a lively discussion about the “The Car Guys of Television,” which gave a behind-the-scenes look at producing automotive television shows. 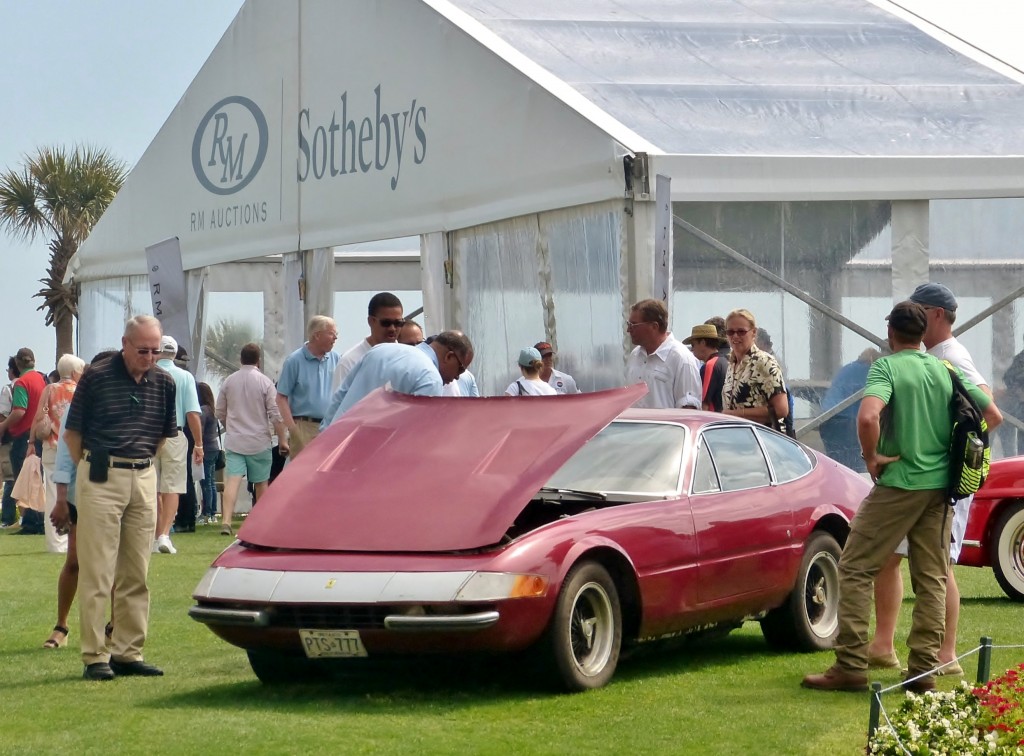 RM/Sotheby’s Auctions preview tent is open to the public the day prior to the show, so everyone can get a free of charge look at what’s going under the gavel 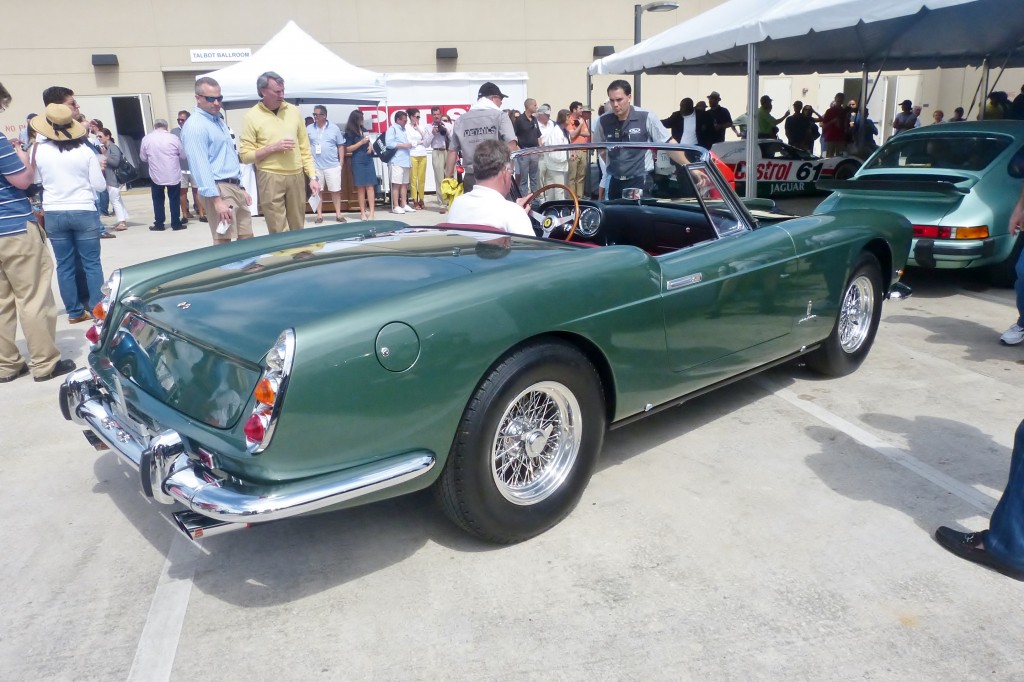 Among the Auction’s top sellers was this Ferrari Superamerica Cab. Tasty, but costs many millions now. 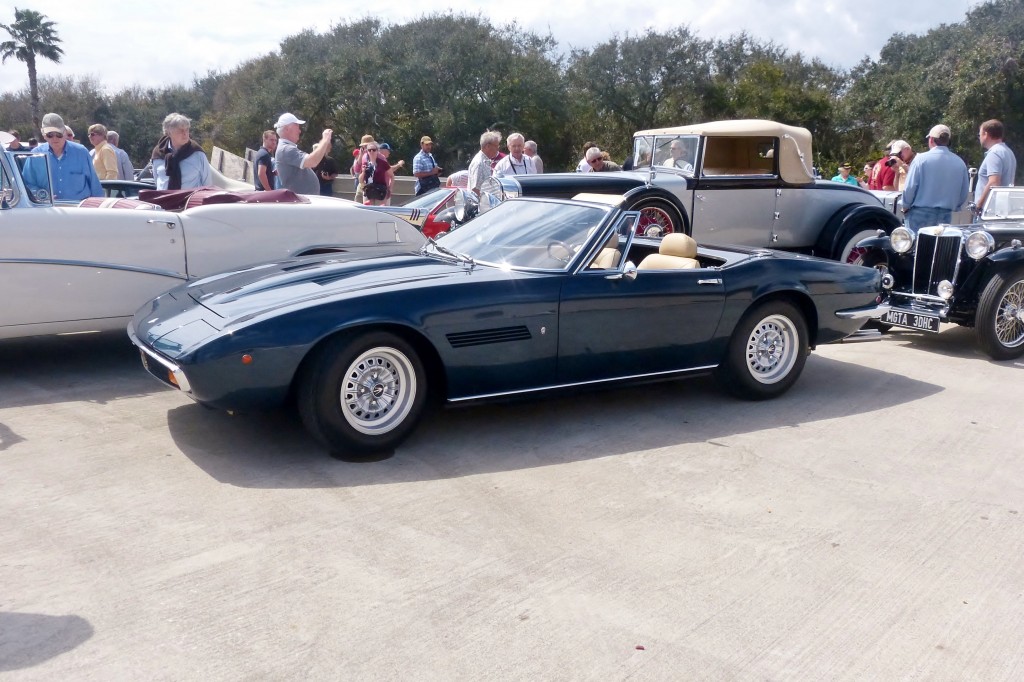 Among my personal favorite Maseratis is the always fabulout Ghibli Spyder, only about 25 built by the factory, and never more pretty than this one. Yum.

This year’s RM Sotheby’s Amelia Island, FL auction broke records by achieving the highest auction results in Amelia Island Concours history, garnering $60,328,550 in sales. A 1960 Ferrari 400 Superamerica SWB Cabriolet was the most valuable vehicle sold during the 2015 Amelia Island Concours week, selling for $6,380,000. Proceeds for this car’s sale will benefit the consignor’s charity for the education of children. 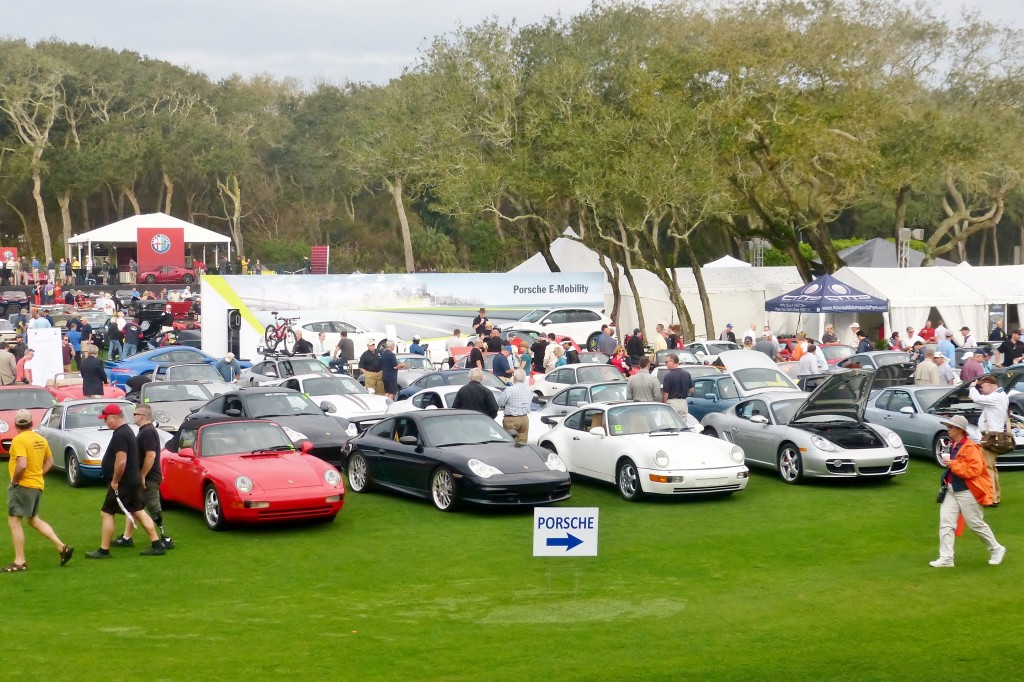 The day before the concours itself, the show hosts a cars and coffee cruise in on the actual show field. It was well organized and hugely attended. Maybe the best I’ve ever seen, with a varied and spectacular turn out. 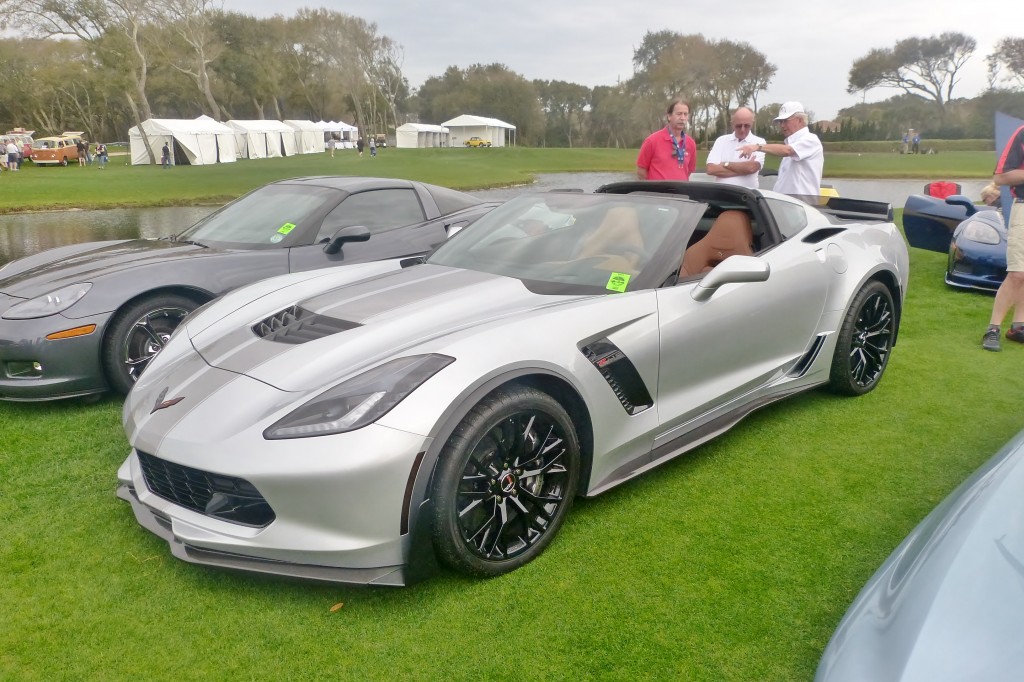 Amelia’s cars n coffee was extremely well attended, and offered something for everyone. 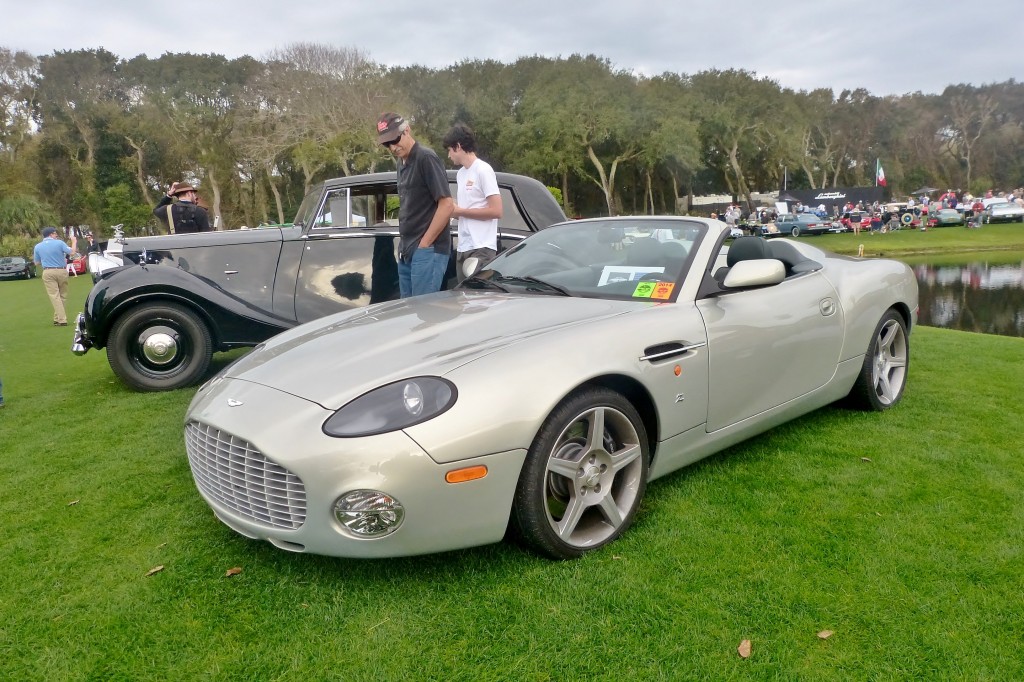 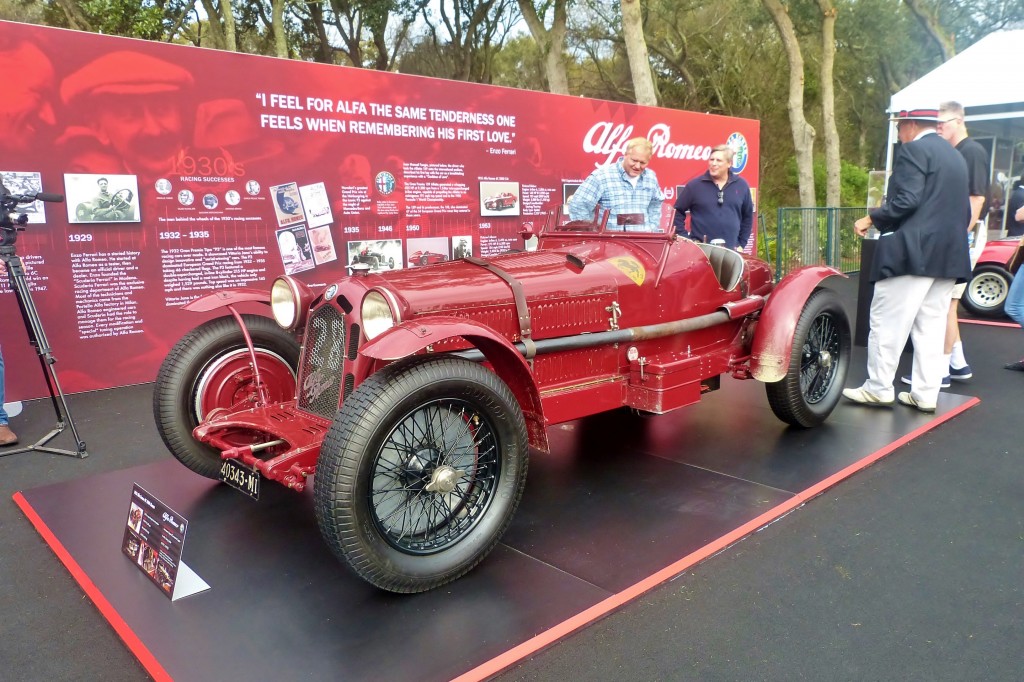 Several luxury automotive brands sponsor the show, and with that comes displays of their new and often old products — Alfa Romeo’s booth was particularly well executed. 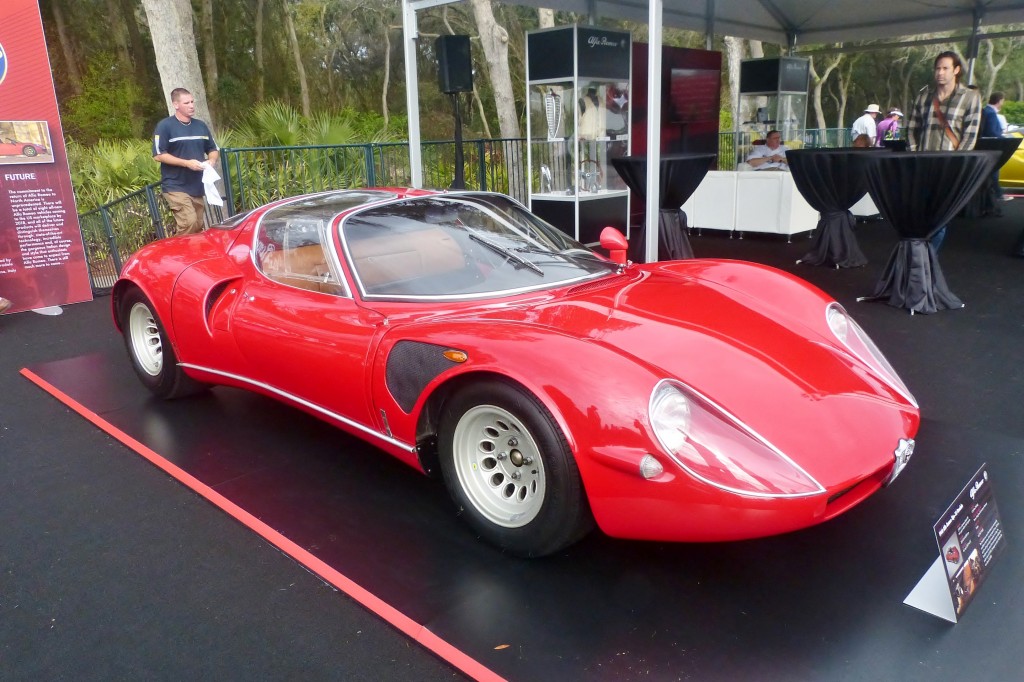 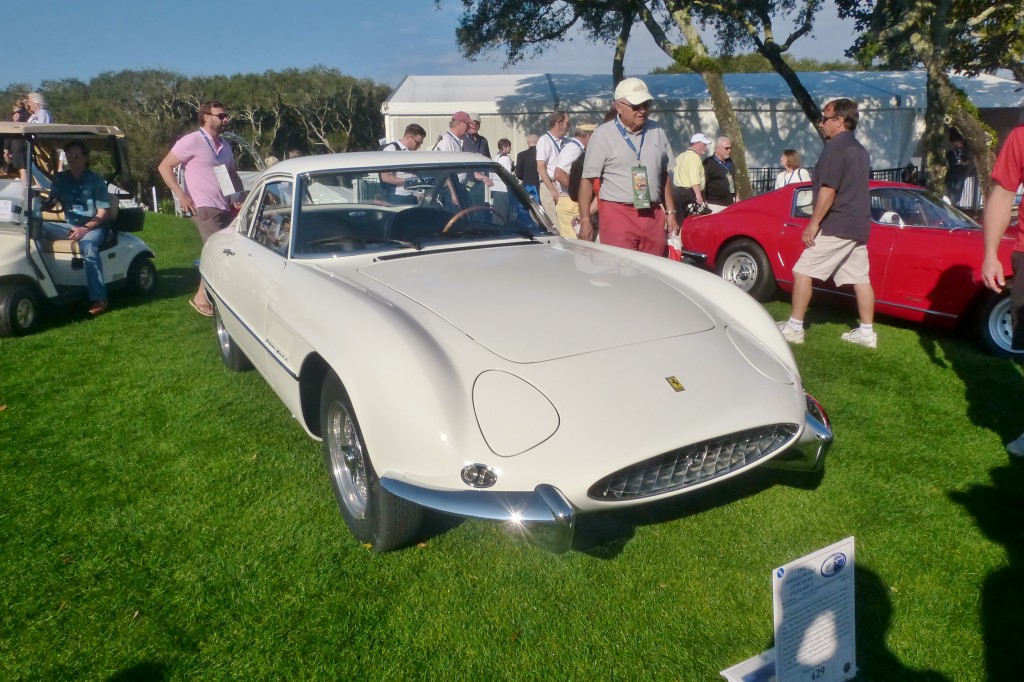 Ferraris at Amelia Island! Of course…many, rare, and fabulous 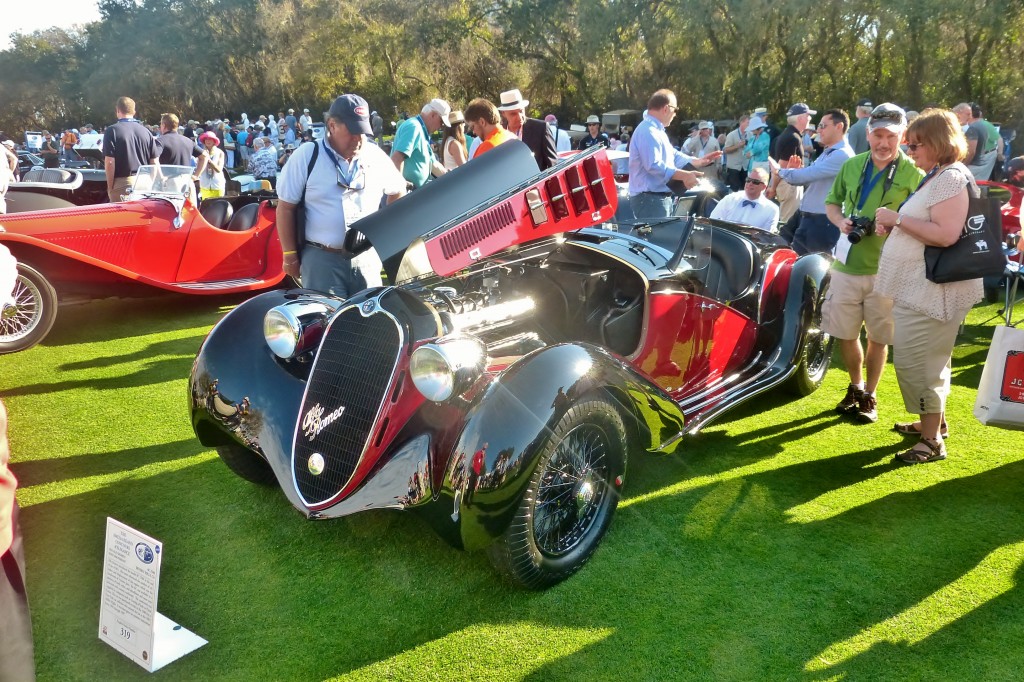 Big Banger Alfa 8C 2900, about as good as pre WWII exotics can get 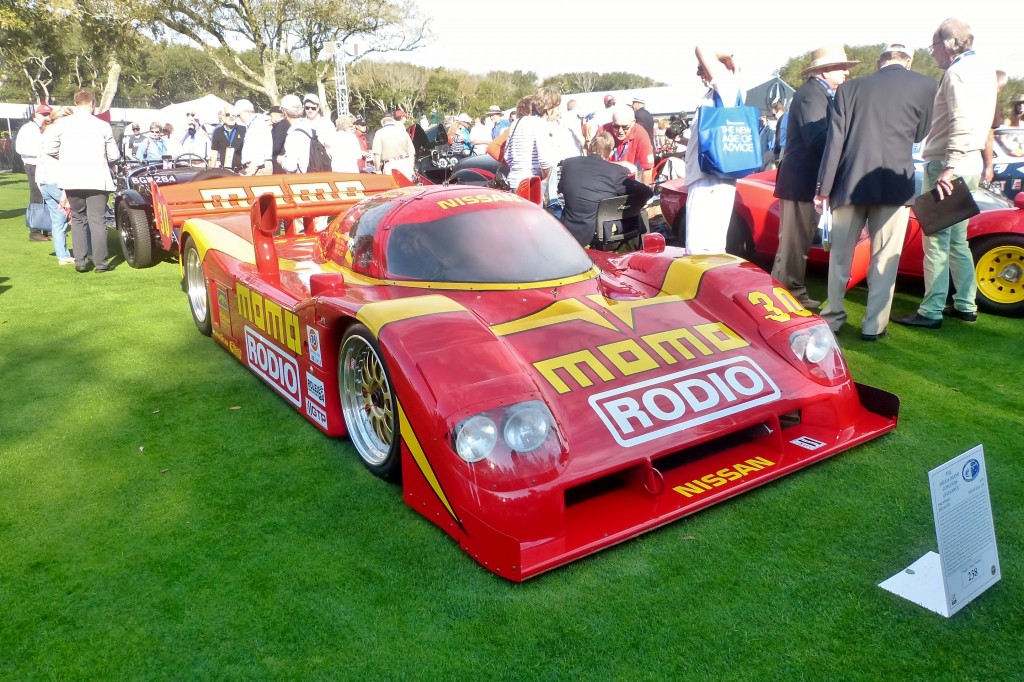 Inspire of the bright red paint and Momo livery, this is NOT an IMSA Ferrari, instead but an ultra fast turbo V-6 Nissan IMSA prototype. Besides all the heavy classics and sports cars, motorsport is a bit part of Amelia’s makeup, and you’ll always see great race cars here. 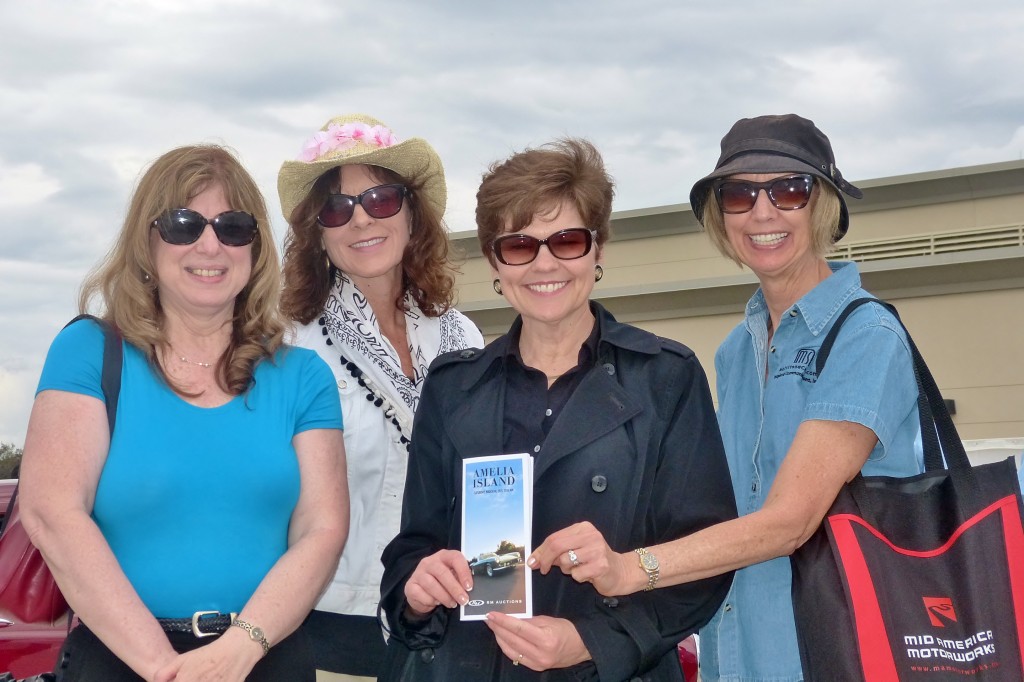 Everyone has fun at Amelia Island, including this fabulous foursome of ladies. From left, my friends Bev, Margaret and Cathy, plus wife Linda at far right