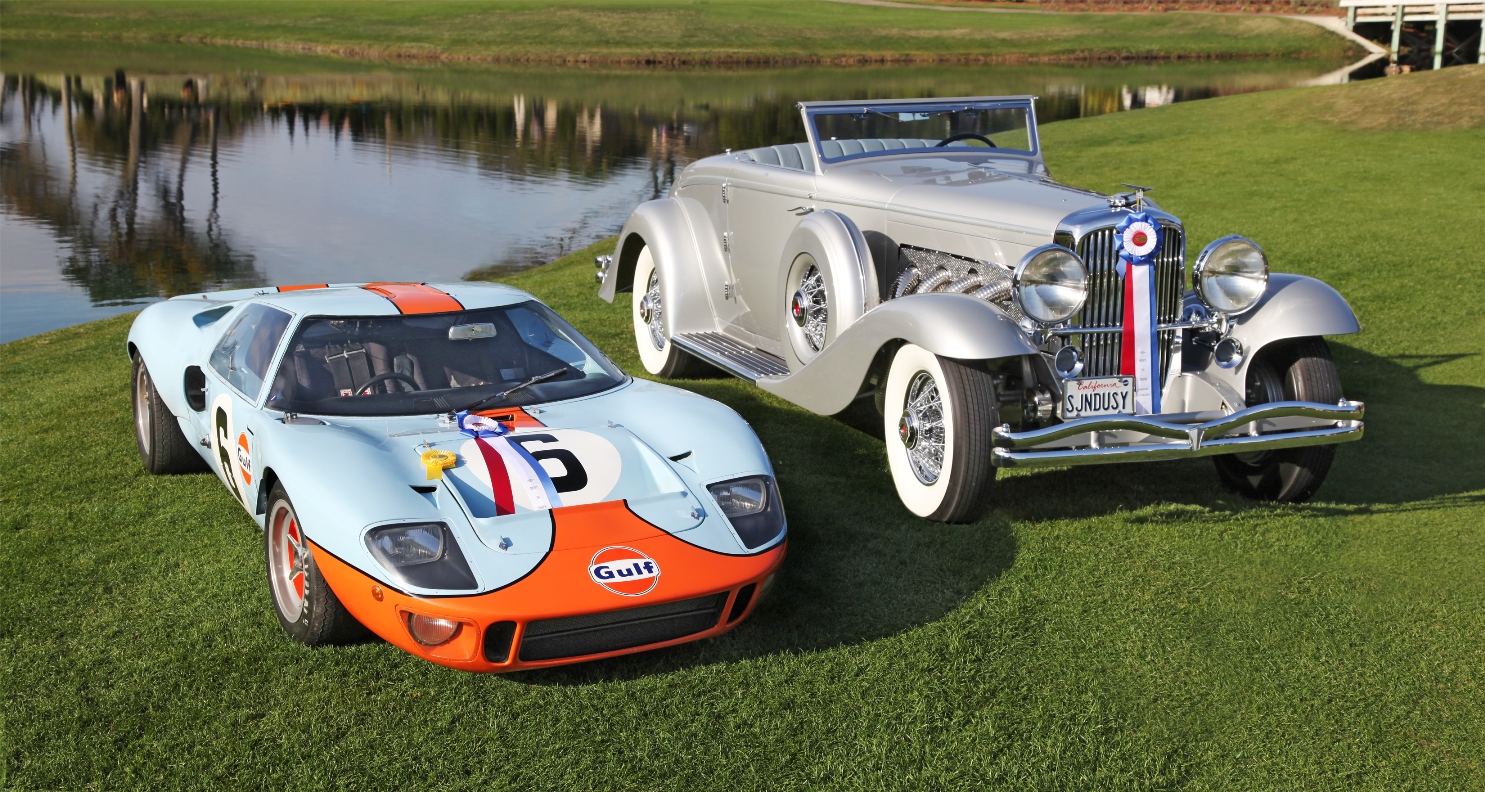 The World’s Most Innovative Concours Weekend

The 1936 Duesenberg SJN (Supercharged), owned by Helen and Jack Nethercutt of the Nethercutt Collection, took home the prestigious Concours d’Elegance award, heralded as one of the most sought-after trophies in classic car pageantry. This beautifully sculpted, apple green, SJ straight-eight engine has a 420 cubic-inch engine displacement and with its Duesenberg-designed supercharger, unleashes 320 horsepower. The sporty, Rollston convertible coupe was one of the most powerful open cars of the 1930s and could race from zero to 100 mph in a mere 17 seconds, an impressive feat for the era.

The highly coveted Concours de Sport award was presented to a 1968 Ford GT40, owned by the Rocky Mountain Auto Collection. This Ford chassis, #1075, a newly constructed, Mirage style, lightweight chassis, won at LeMans in both 1968 and 1969. Its incredible history includes six wins in 11 races. After the car’s racing career ended, #1075 was put on display at the Indianapolis Speedway Museum to commemorate its racing records, before being returned to private ownership in 1984.

“I’m very pleased with the judges’ decisions for the 2013 Amelia Island Concours winners, as these vehicles are stunning examples of classic design and racing history,” said Bill Warner, Chairman and Co-Founder of the Amelia Island Concours d’Elegance. “Every year I’m blown away by the cars that grace our field and I would like to congratulate our panel of esteemed judges on their excellent selection. I’m sure the decision wasn’t easy.”

More than 300 illustrious cars and Ducati Motorcycles from around the world participated in the 2013 Concours, allowing an enthusiastic crowd to witness a wide array of automotive excellence. Highlights on the field included the presence of the only original Lamborghini Miura Roadster ever built, as well as the Bill Mitchell Sting Ray that was once driven by Elvis Presley in the movie Clambake. An extremely rare pair of 1910 ‘Prinz Heinrich’ cars by Mercedes-Benz also made an appearance, in addition to the Cadillac “Coupe de Ville” Prototype, which was seen by the public for the first time in more than 50 years.

Attendees were treated to modern automotive splendor as well. The last of only nine custom built ALFA Romeo Stradale TZ3s, an Azzuro California hued example, made its national debut, while Chevrolet displayed the seventh generation of its iconic Corvette, the 2014 Stingray, as part of the Concours’ 50th Anniversary celebration of the original Sting Ray. Not to be outdone, Cadillac displayed its impressive 2003 “Sixteen” concept car, a 1000hp, 13.6 liter V-16, 5000-lb, 19-foot-long engineering and design statement, which participated in the Cadillac Concept Car Class.

This year’s Concours also celebrated the cars of Harry Miller, marking the 90th anniversary of his first win in the Indianapolis 500. On hand to mark this momentous occasion was the supercharged, Miller 91, front drive Indianapolis 500 racer that set a speed record in 1928, as well as nineteen other rare Miller racers.

Legendary driver Sam Posey served as the 2013 honoree and nine of the cars he raced in, with conspicuous success during his competition career, were featured in the “The Cars of Sam Posey” class.

Racing legend Sir Stirling Moss made his way to the Amelia and was an exciting addition to the numerous automotive icons in attendance this year. This Mercedes-Benz racer returned to the Concours as a special guest after having been the first Honorary Chairman of the Amelia Island Concours d’Elegance in 1996.

2013 also marked the inaugural “duPont REGISTRY CARS & COFFEE AT THE CONCOURS presented by Heacock Classic Car Insurance” affair, which took place on Saturday, March 9 on the 18th fairway of the Golf Club at the Ritz-Carlton, Amelia Island. Free to the public, thousands of car fans came out to see the latest offerings from Cadillac, Corvette, SRT/Chrysler, Maserati, Porsche, Lamborghini, Ferrari, McLaren, BMW, Infiniti, Bentley, Jaguar, Mercedes-Benz and other sponsors ahead of “Concours Sunday”. Members of local car clubs displayed their rare and exotic cars as well.

“The Amelia is more than just an event. It’s a celebration of the past, present and future of automobiles,” said Warner. “We gathered the very best in classic cars, racing history and automotive superstars together for the 2013 Concours and I don’t know how we’ll repeat it in 2014. Then again, I’m sure we’ll think of something. ”

The 19th annual Amelia Island Concours d’Elegance is scheduled to be held on March 7-9, 2014 10th and the 18th Fairways of the Golf Club Amelia Island at Summer Beach adjacent to The Ritz-Carlton, Amelia Island.

Now in its second decade, the Amelia Island Concours d’Elegance is among the top automotive events in the world. Always held the second full weekend in March, “The Amelia” draws nearly 300 rare vehicles from collections around the world to The Golf Club of Amelia Island at Summer Beach and The Ritz-Carlton, Amelia Island for a celebration of the automobile like no other. Since 1996, the show’s Foundation has donated over $2 million to Community Hospice of Northeast Florida, Inc. and other deserving charities on Florida’s First Coast. The 19th annual Amelia Island Concours d’Elegance is scheduled for March 7-9, 2014. For more information, visit www.ameliaconcours.org or call 904-636-0027.