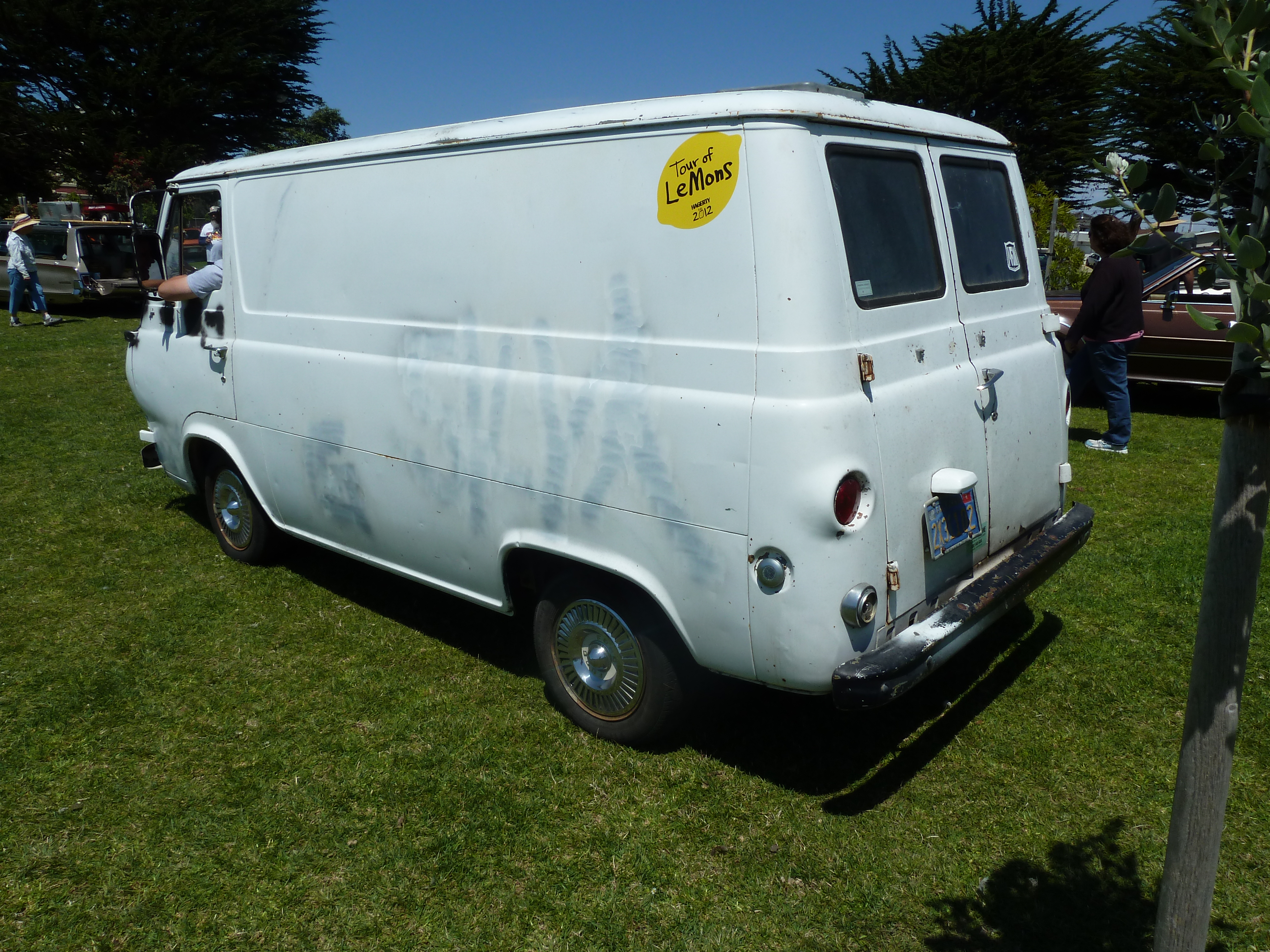 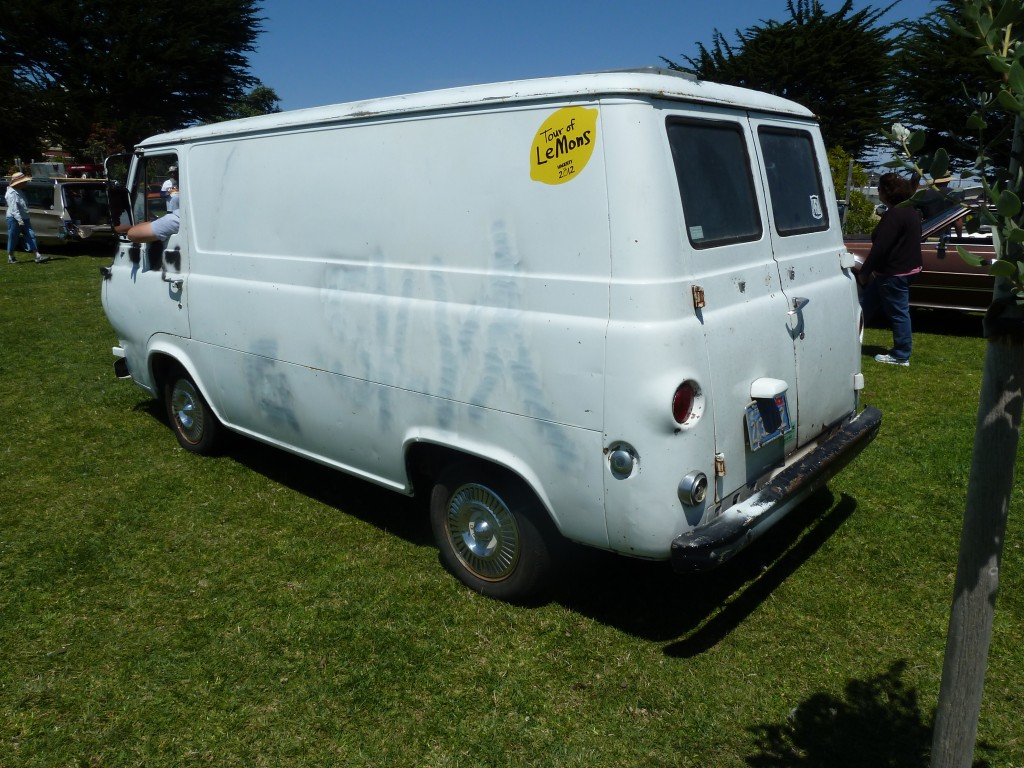 Not my actual van, but really close (this one has way too many matching wheels and tires to be the one I had). Chrome bumper on mine? No way, but mine did at least have all four of the metal letters that spelled out F O R D on the rear doors.

My friend and neighbor Leslie just bought a used but recent model Ford van, which reminded me of this story from my checkered automotive past…

During one’s lifetime, we all own at least one vehicle with “personality.” The sort of heap that, if you were playing Car Monopoly, the little red card would read, “Go directly to junkyard. Do not stop. Do not pay (another) $200.” Mine was a 1962 Ford Econoline van.

It was the barest and most stripped version made, with a 200 cubic inch straight-six motor (replete with a one-barrel carb), manual trans, two seats, and the minimum number of windows required to be considered legal transportation in America. No radio, no heat, no sunvisors — or maybe just one, I don’t recall. The thing was so basic, its wiring harness couldn’t have contained more than one wire.

When it found me in the early 1980s, the van still wore its original, if battle-scarred, “telephone truck white” paint because in its former life it was a telephone truck. I had visions of painting blue and red balloons all over it, then submitting it to the Guinness World Records people as the world’s biggest loaf of Wonder Bread. But my Econobox was straight and rust free, and at least two of the tires matched. Can’t say the same for the wheels. I think the van had about 300,000 miles on it. Or it could’ve been 3,000,000.

Why did I buy this forlorn shoebox? I didn’t.

Someone (just a random dude, as in “that time with that thing with that guy...”) owed me a couple hundred bucks, and we reached the point where I knew he’d never repay me. So I took the 14 Karet gold bracelet-an inch wide, finished in that trademark Miami Vice “chunks of gold” look-off his wrist. Literally. Since I don’t wear pastel suits, I decided to dump it for whatever I could get. Another guy I knew wanted the flash, and “whatever I could get” was The Van. We traded, although I always wondered if that was really his signature on the pink slip.

It ran well enough-when it started. The timing was always out of adjustment. I’m sure the timing chain stretched like Silly String. And the distributor shaft had more slop than a 400-pound pig. But the cool thing about the first-gen Econoline is that the engine was mounted in the middle, making it one of the few vehicles on earth that allowed you to sit in the driver’s seat, turn the ignition key, and adjust the timing simultaneously. Too much advance, and it pinged or just wouldn’t fire; retard it too far, and it had no power and would overheat. But I could adjust it while driving, allowing me the choice between these evils.

Once the timing was set to within, oh, 30 degrees, the next challenge was shifting gears. The bushings still present in the three-on-the-tree’s column linkage were worn beyond hope. Gripping the shifter handle was as effective as stirring a jar of rocks with a screwdriver: You moved things around a bit, but with no meaningful result. However, by grabbing the shifter stalk at its base, down close to the steering column, and demonstrating dexterity equaling that of a neonatal brain surgeon, I could, on occasion, affect forward gear changes. Reverse? The trans may have had one. But I never found it.

In spite of all this personality, the van was damn handy. Nothing you could put inside could hurt it. No problem getting it dirty, either, although I was a little miffed when I hauled a load of trash to the landfill and the dump guy assumed I was leaving the van as well. My buddy Dan and I used to drive it to the sports-car races at Riverside International Raceway. There was plenty of room for ice chests, camera gear, banana loungers, and any parts off wrecked race cars we were able to scrounge. We left all the doors open and sat inside during summer or threw the loungers on top when it was cool out. The visuals resembled the observation deck atop Andretti Autosport’s hospitality semi-trailer, if only in concept.

A few years later, my dad and I bought a 1972 Ford F-100 longbed pickup (V-8, automatic, air, and four matching wheels and tires) that made the van redundant. So I sold it. I recall the buyer offered me $500 or a gold bracelet.

Needless to say, I took the cash.