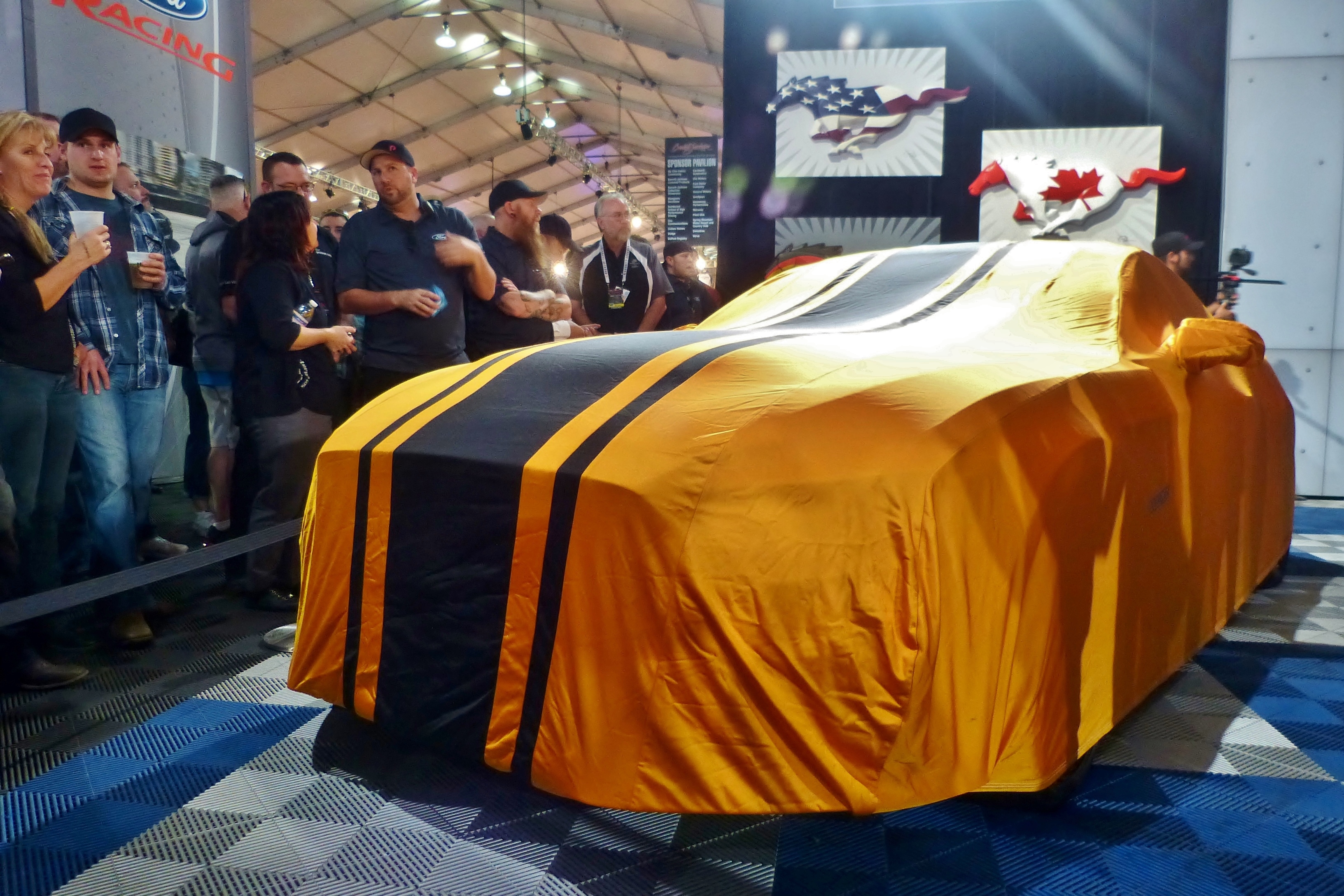 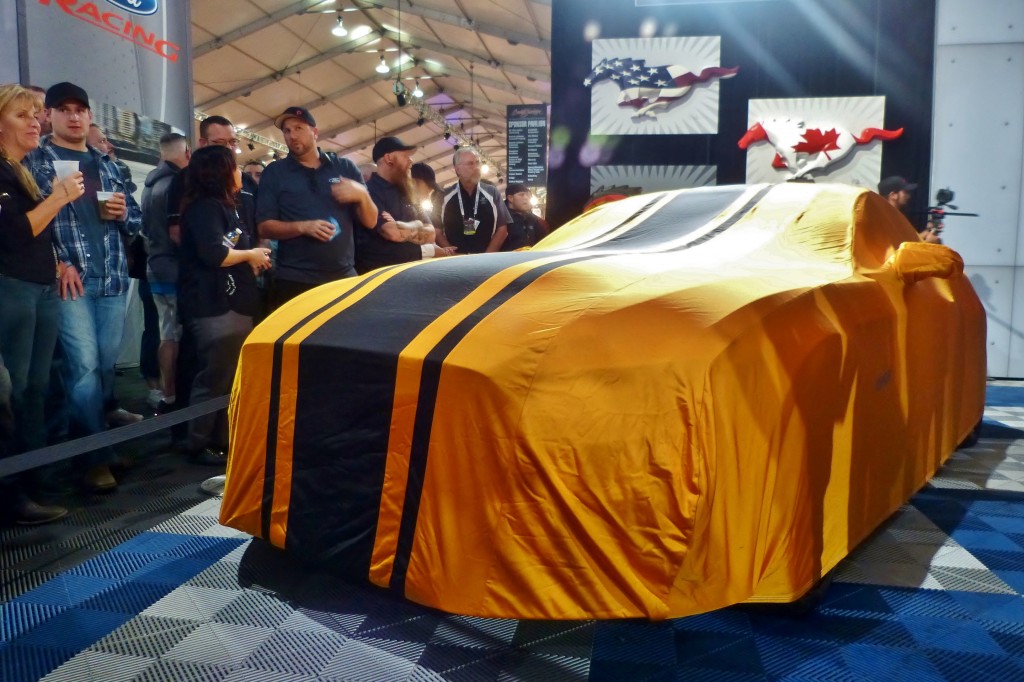 Anticipation in what lies beneath…

This news from my friends at Shelby American… 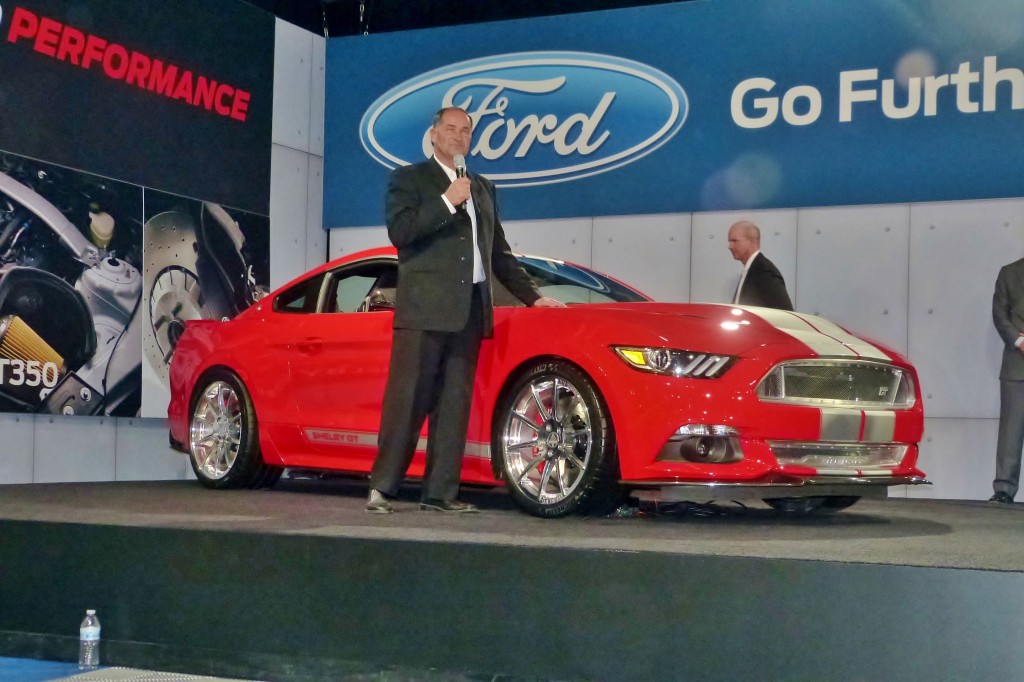 My friend, Shelby American’s official Vice President of fun and nitrous, Gary Patterson, takes the media and assembled crowd of fans for a walk around the new Shelby GT.

LAS VEGAS – Jan. 16, 2015 – Shelby American, a wholly owned subsidiary of Carroll Shelby International Inc. (CSBI:PK), launched the first global Shelby GT muscle car, which is based on the all-new 2015 Ford Mustang GT. One of the most popular cars in Shelby history the 627 HP 2015 Shelby GT was unveiled today at the Barrett-Jackson Scottsdale Auction in Ford Motor Company’s booth. Shelby is now taking orders with delivery of cars planned for the beginning of the second quarter of 2015. 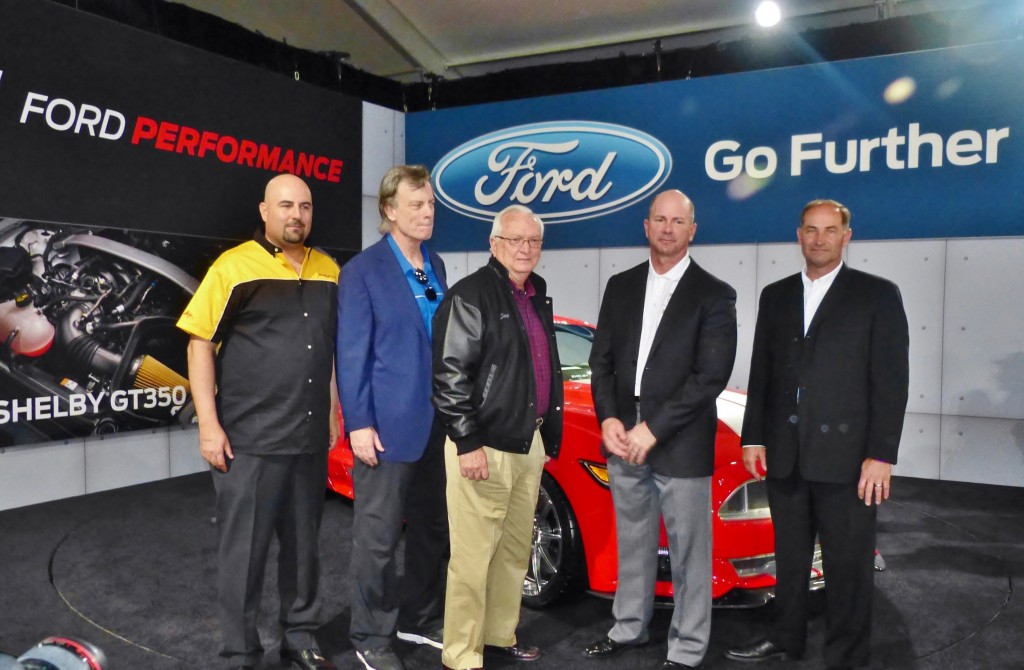 Shelby CEO Mr. Conway, quoted just below, is the white haired gent in the middle of this lineup

“This 2015 Shelby GT incorporates all of the engineering lessons we’ve learned building high performance vehicles over the past 50 years,” said Joe Conway, co-CEO of Carroll Shelby International and CEO of Shelby American “With the international distribution of the current Ford Mustang, we worked closely with our partners to develop a car that can be offered in both North America and overseas. It’s the first Shelby muscle car in our history designed from day one to be a truly global vehicle.” 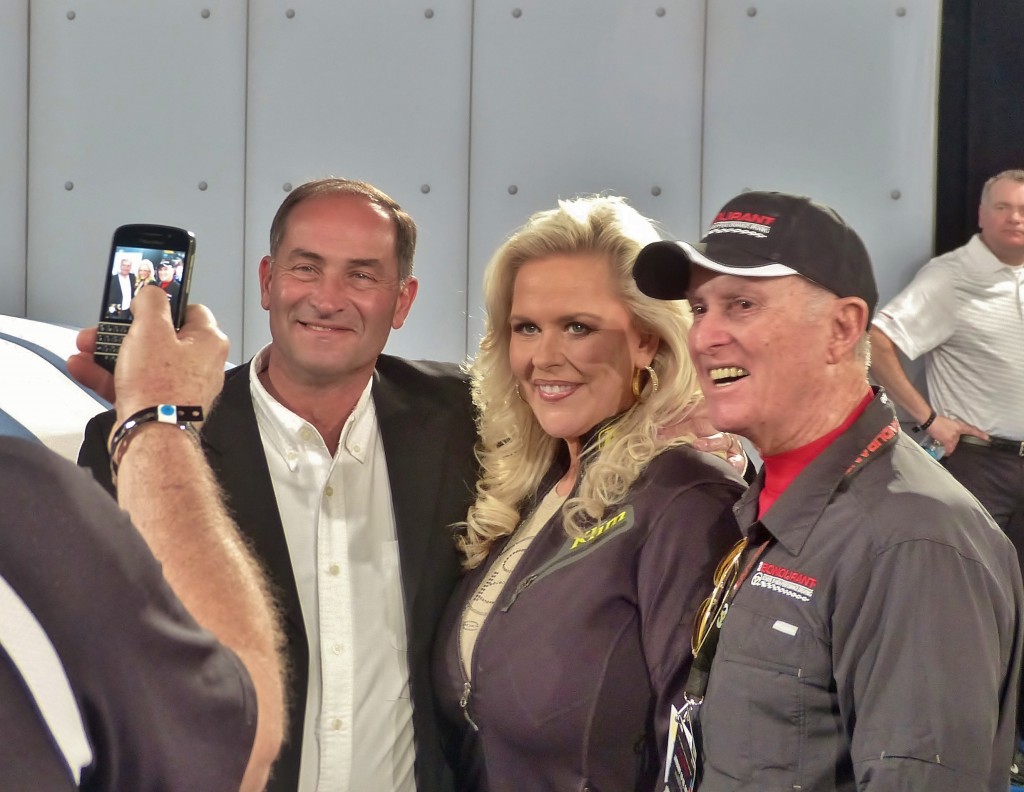 Lots of special Ford people on hand, including Patricia and Bob Bondurant here with Patterson

In 2007, Ford Division, Carroll Shelby and Ford Racing created the Shelby GT. Beginning as 4.6L Mustang GT’s assembled at Ford, they were shipped to Shelby in Las Vegas for transformation. Around 8,000 Shelby GT’s were built from 2007 to 2008 and the wildly popular car dominated its SCCA racing class. In 2013, Shelby American returned the Shelby GT to its lineup after a five year hiatus. 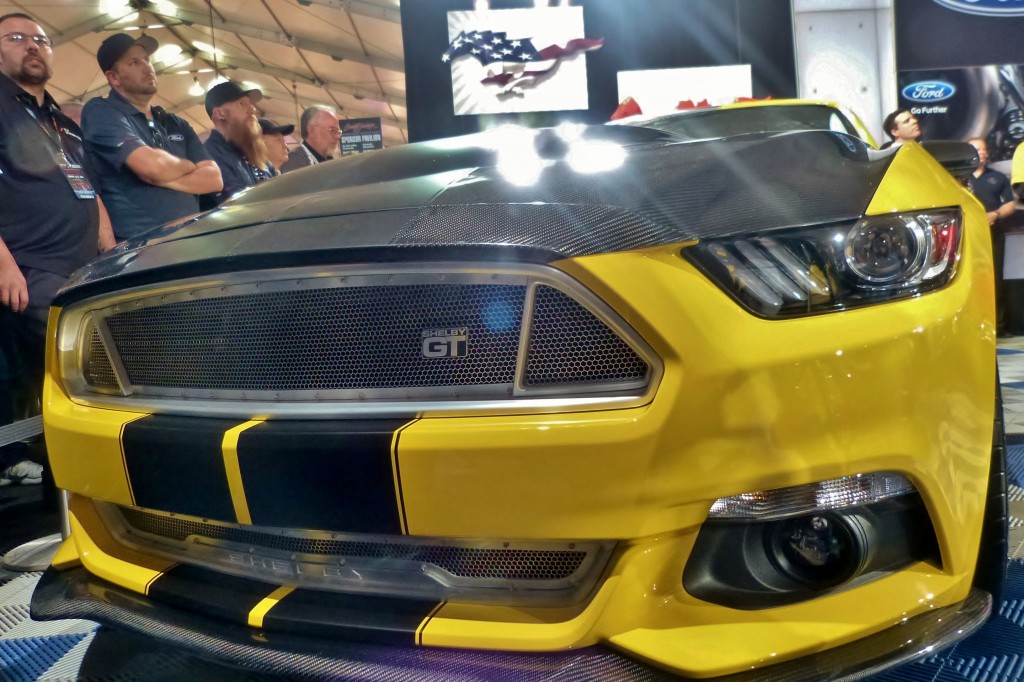 “We took a new approach with the 2015 Shelby GT,” said Shelby American Vice President of Operations Akos J. Feher. “We had a lot of fun designing these cars and ended up building the most powerful Shelby GT ever offered without sacrificing reliability. All exterior parts were designed and developed in-house, with every component exclusive to Shelby. We only used lightweight carbon fiber for all the aerodynamic components, including the brand new hood. The components were designed to allow a high level of customization for our customers, like the new billet aluminum front grilles.” 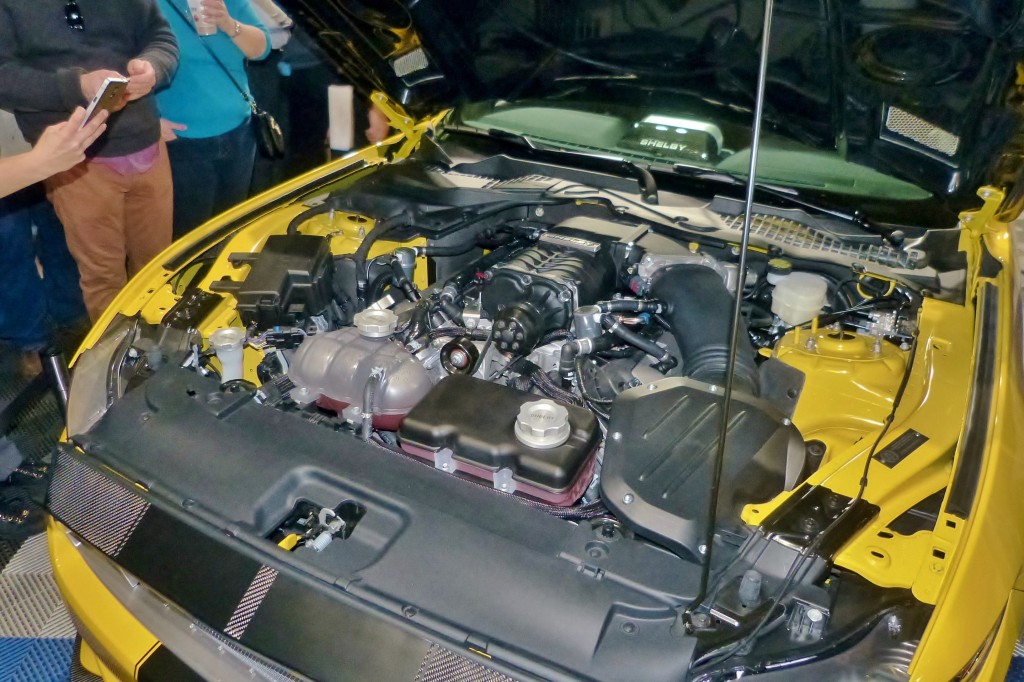 Who doesn’t like Big Power? Shelby supercharges the 5.0-liter Coyote V-8 up to 627 horse

Every aspect of the Shelby GT is enhanced to create a potent all-around performer. Like it’s predecessor, this car features Ford Racing Performance Parts including a 627 HP supercharger, performance handling kit and half shafts. Gearing has been upgraded 3.73 gears and paired with chrome-tipped Borla exhaust. The Shelby GT rides on a staggered set of WELD Racing wheels shod with sticky Michelin tires.

This car loves the twisties and can handle the curves thanks to the new performance handling kit. The Wilwood six piston front brakes ensure the car can stop on a dime. The base car’s good looks are enhanced by adding a new hood with functional air vents and other functional aerodynamic components like a 2-piece rear diffuser. All of the Shelby exclusive exterior parts are made of carbon fiber; they are not only functional but also look great either painted or unpainted. Shelby exclusive front grilles, made entirely out of billet aluminum highlight the already aggressive nose of the car. 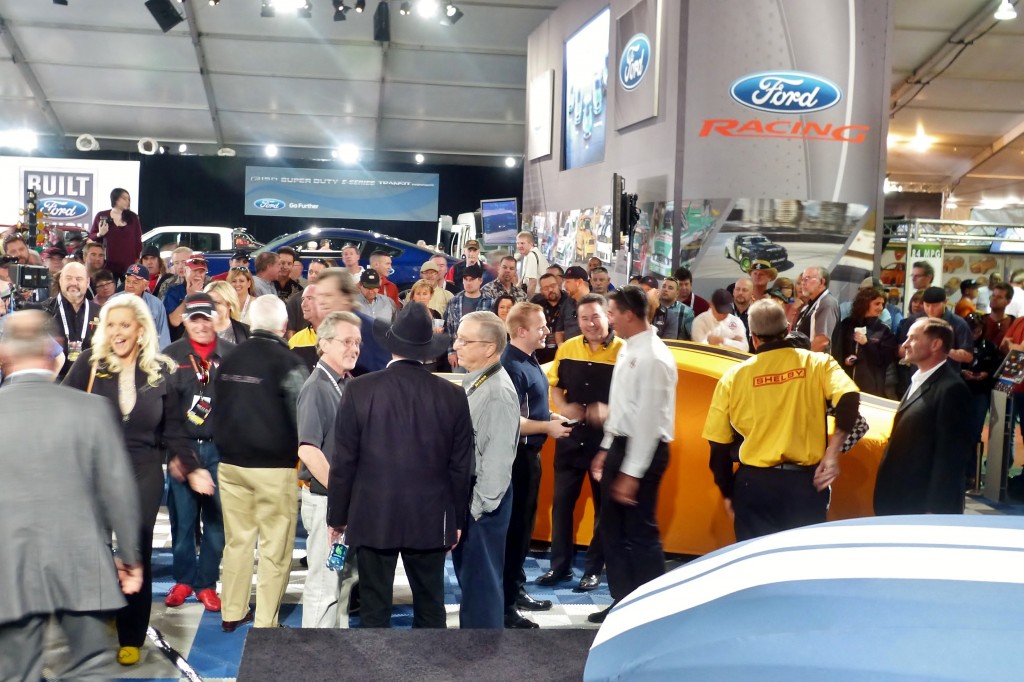 Let ’em in! Instead of the usual media only press conference, the Shelby GT reveal was held in the Ford Booth at Barrett-Jackson with the public and all Shelby enthusiasts welcome. One Shelby exec commented that this was critical “because without the public, our customers and our fans, we got nuthin”

A Shelby GT can be built based on either a manual or automatic Mustang GT, is 50 state emissions legal in the USA and runs on pump gas. Shelby’s most demanding customers can order a ’15 Shelby GT with a long list of options including a 700+HP performance upgrade, adjustable suspension, upgraded big brake kit, and a number of interior upgrades.

“The 2015 Shelby GT is a nicely balanced muscle car that does everything well, whether on the track or on the drag strip” said Gary Patterson, Shelby American Vice President of Strategic Sales and Media Relations. “This post-title program takes performance to extreme levels. At the same time, the styling is sleek yet uniquely American with touches from Shelby history. Based on the fantastic new Ford Mustang platform, the Shelby GT can easily double as formidable daily driver and then run rings around the competition at track events.” 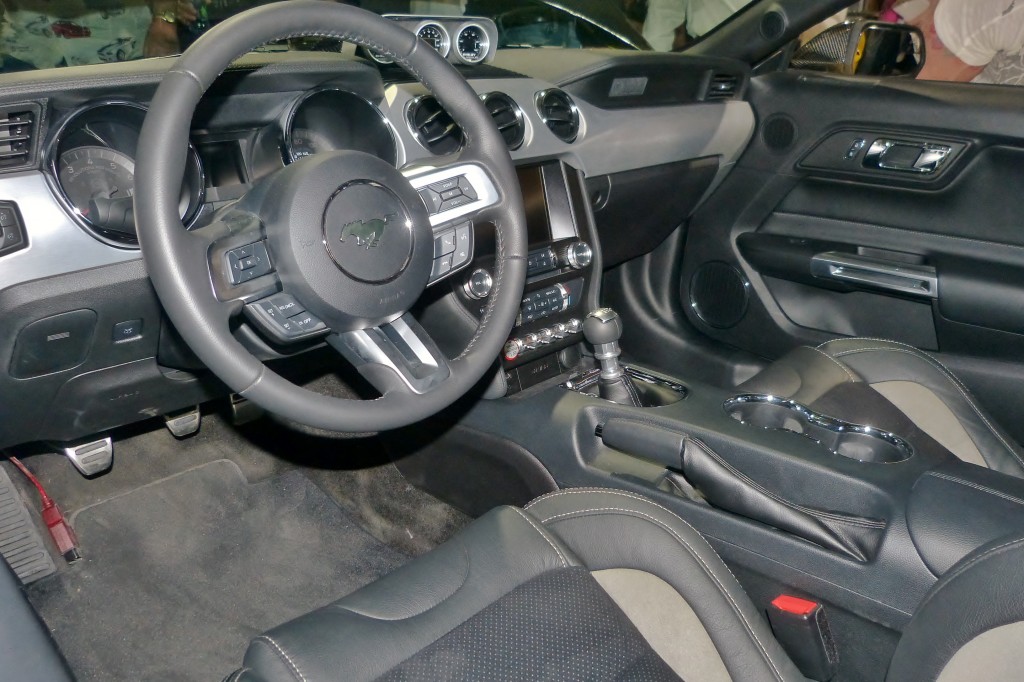 This is a post-title program; Ford dealers worldwide can contact Shelby American to build a Shelby GT based on a car owned by a customer or one of their 2015 Mustang GT fastbacks or convertibles. Each car will be issued a Shelby American CSM number for documentation in the official Shelby American Worldwide Registry to maximize potential collectability.

“The demand for Shelby vehicles, parts and products around the globe continues to skyrocket,” said Neil Cummings co-CEO of Carroll Shelby International and CEO of Carroll Shelby Licensing. “In addition to a superb facility in Las Vegas, Shelby is establishing mod shops worldwide. This will allow enthusiasts worldwide who have access to a Ford Mustang to transform it into a Shelby GT locally.”