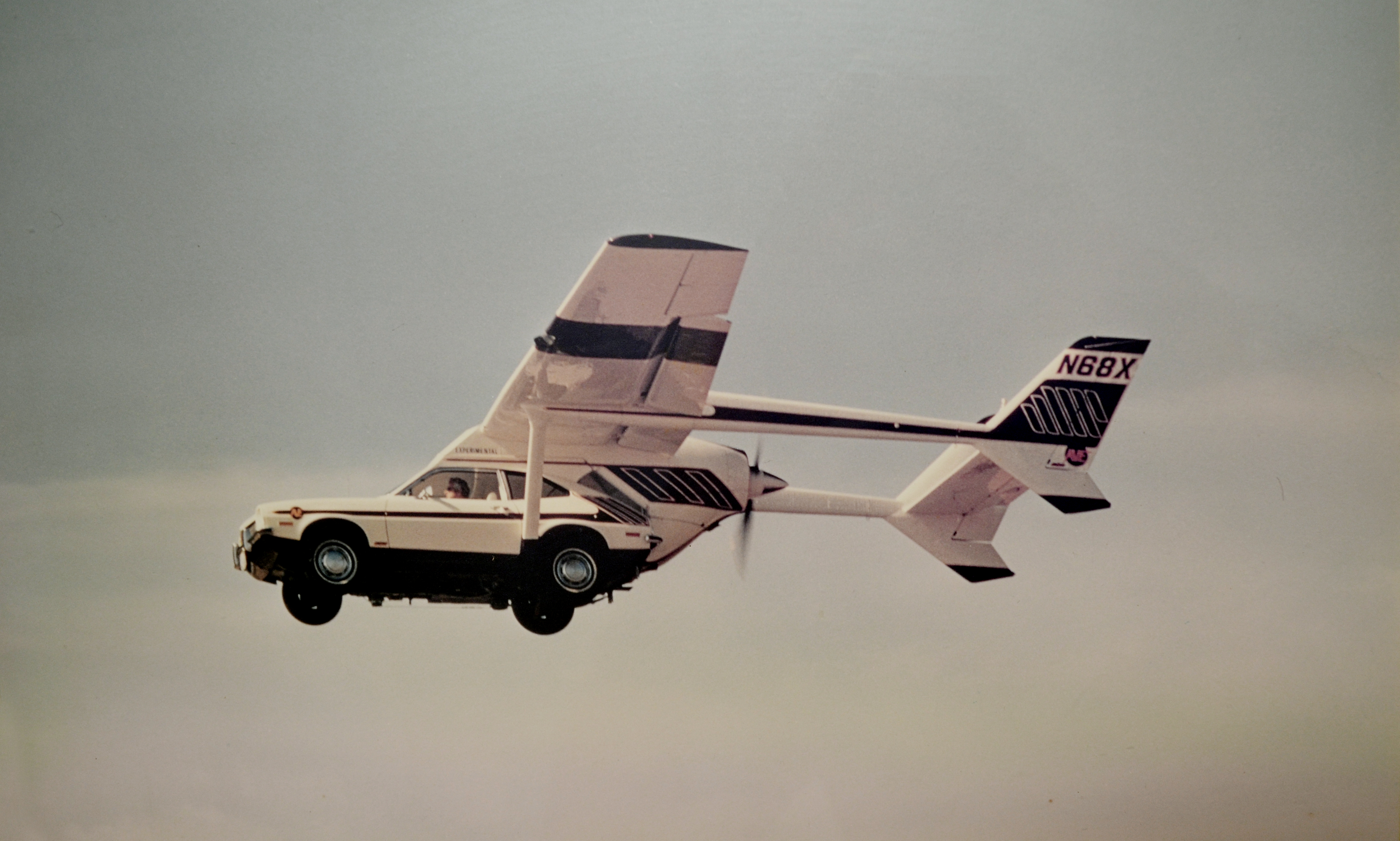 In 1973, aeronautical engineer and inventor Henry Smolinski had the idea of beginning with a rear single-engined Cessna Skymaster, removing the main front cockpit section, and replacing it with a car.  This way, one could fly to their destination, separate the airplane section, park or otherwise store the latter at the airport, and then drive the car without a stop at a rental car counter.  No more commuter traffic on the 405!  Quite an idea – and one which actually got off the ground, literally and figuratively.

In a hangar at the Van Nuys, California, Airport, the experiment began on the “Aircar,” later to be named “Mizar” (one of two twin stars in the Big Dipper constellation). This project began in 1970, with the formation of “Advanced Vehicle Engineers” (AVE), also of Van Nuys, to have a flying prototype ready for flight in January of 1973. Chief engineer of the Mizar project was A.M. Kaplan, an owner of some 50 patents, who worked for Lockheed and North American Rockwell. This project proposal was the first one to take a Detroit-built automobile, and attach it to an FAA-certified airframe, tail boom section and aircraft engine. Upon landing, the pilot would detach the aircraft assembly, “park” it, and drive the car away to its destination, as the road-going portion of a dual-purpose vehicle.

The Mizar concept was projected to have a range of 750 miles and airspeed of 130 mph, with a targeted takeoff speed of 65 mph, at a distance of 500 feet, and landing in just 550 feet. Smolinski chose the new subcompact Ford Pinto because of its light weight – only around 2,100 pounds — and that the Cessna Skymaster structure was advanced enough to make this project work. During takeoff, the Pinto’s base 1.6-liter Kent I-4 engine would propel the Mizar down the runway, providing a shorter takeoff, working in tandem with the aircraft’s 210 horsepower Continental engine.

Once in the air, the Pinto’s engine could be shut off.  Attachment of the Pinto to the Skymaster airframe was designed to be quick and easy: The car would be backed under the wings, and a self-aligning track system would automatically align the airframe with the car, and lock it all down.

A 1972 Pinto was provided by Galpin Ford, as part of the investment by Galpin Motors owner and CEO Bert Boeckmann. In the context of new innovations in transportation, and often investing in them, Boeckmann stated about the project: “Commercially, I didn’t know if it would ever take off [metaphorically speaking], but I thought it would certainly generate a lot of publicity.”

The Pinto was re-geared for flight — encompassing about 40 modifications — to make it airworthy. The steering system was modified to accommodate the ailerons by turning the wheel, and controlling the elevator by moving it backward or forward. Retractable rudder pedals were added, installed under the steering wheel, and all necessary flight instruments were mounted on the dash. Other modifications included a sheet-metal panel under the car for aerodynamics, aluminum wheels and radial tires, disc brakes, relocation of the fuel tank and battery, and a beefed-up rear suspension to handle the added weight from all the structure and engine mounted on the back of the car.

In the name of reduced overall weight (and in some cases increased strength), some of the original Pinto’s factory parts were substituted with fiberglass and aluminum components. Galpin Ford was working with AVE to provide modified Pintos for the project, which in the beginning had 34 pre-orders for the Mizar from across the country, with a retail price (in 1973 dollars) of $20,000 each. A Galpinized-airworthy Galpin Ford Pinto would certainly become a highly-prized collectible!

Bert Boeckmann was absolutely right about one thing: The project garnered a ton of press and media attention, earning dozens of magazine articles and newspaper impressions.

The dream came to an unfortunate stop when the prototype crashed on September 11, 1973 (exactly three years to the day since the Pinto’s official public introduction date), during a test flight with a new, 300-horsepower Lycoming engine that just had been installed. The physical stresses on the wings are most commonly blamed, and they had buckled; the hapless Mizar plummeted to the ground, killing Smolinski and Blake instantly. And the idea of flying Pintos along with them.