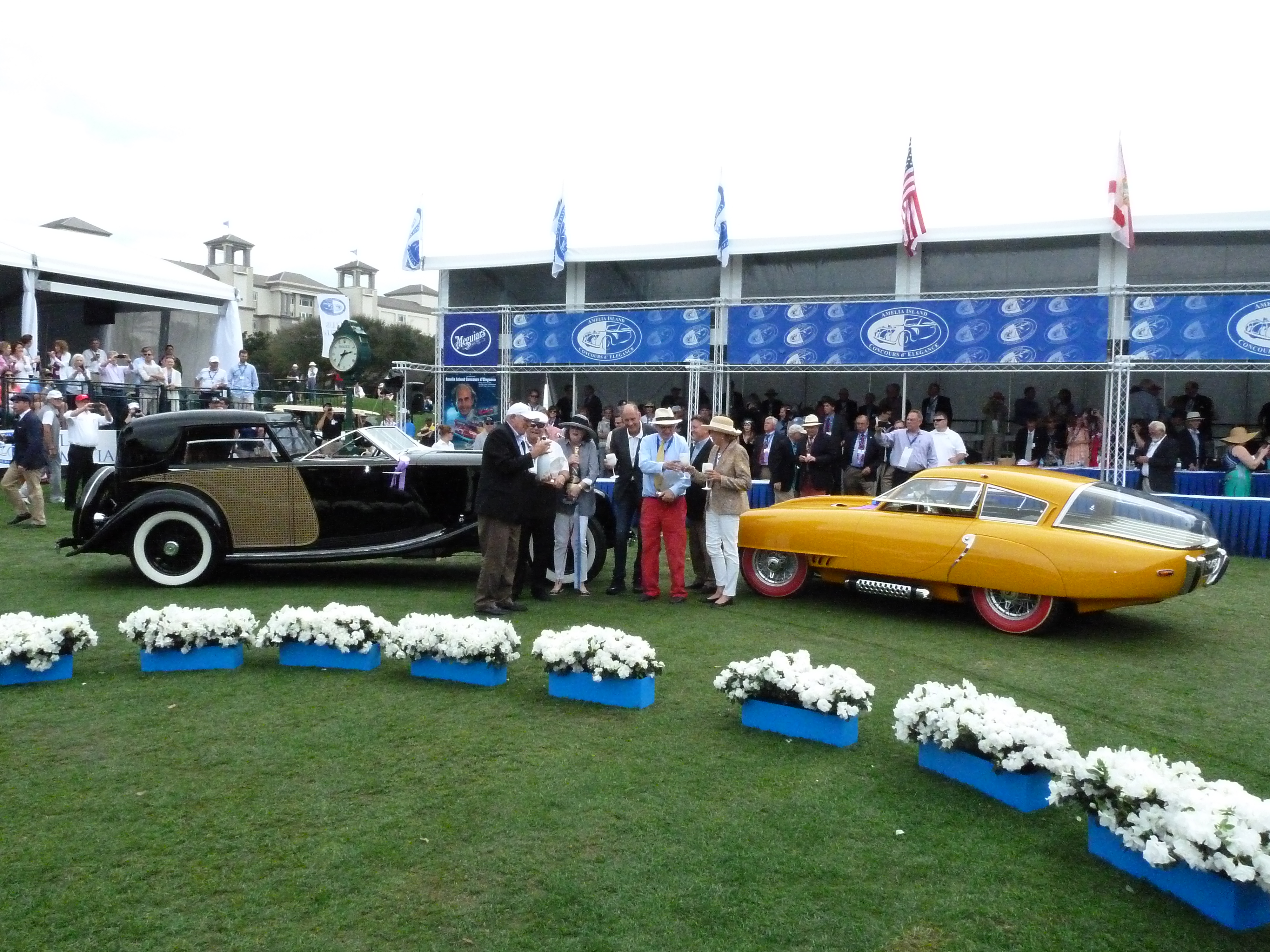 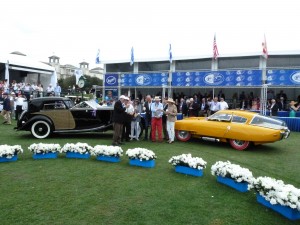 It was again my honor to serve as a judge at the 2016 Amelia Island Concours e’Elegance in Florida, and it continues to rank as among the world’s great concours.  This was the 21st edition of this fabulous show and week full of wonderful automotive and automotive people events, and I think I’ve attended 8 or 9 times now.  It’s a “don’t miss” on our annual automotive calendar. 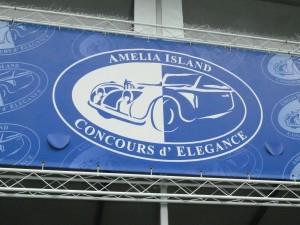 My late father always believed his “lucky number” was 21, but he seldom played blackjack.  His game was the craps table, and given his ability to walk up to a table, place a few bets, and walk away with a couple hundred bucks proved to me that he could somehow manage the numbers and his luck of the roll or draw.  21 was certainly a lucky number for Amelia Island.  Its always a spectacular event, but this year seemed even more special and enjoyable, the cars, the people, the something I can’t quite lay my hands on.  But Amelia 2016 was memorable, all said and done. 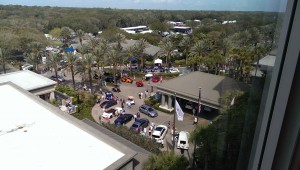 Talk about a room with a view; this is the Ritz’ driveway deck and some of the show field as seen from the 8th floor of the hotel.

Speaking of luck Chairman and Founder Bill Warner sure knows how to conjure it when he needs it.  Rain was on and off predicted all weekend, most particularly Sunday afternoon about the time of the last hours of the awards presentation.  So the show accelerated and compressed the judging and awards timelines so it would be done around 2:30 instead of the usual 4:00 or so.  It was great, made the day go faster, and Warner, again, rang the luck bell, as the waterworks held off until the last trophy was given, and the last show car had cleared the field.  And then it rained holy hell for a few hours. 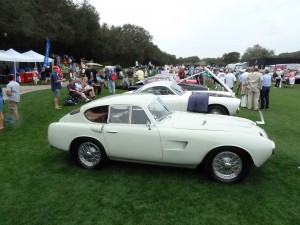 Pegaso class made me stop, stare and gasp. Pegaso was Spain’s Ferrari of the 1950, each one elegant, hand-built, technically advanced, and fast.

As do most big game concours, Warner and his team develop a set of special classes each year and this year two of them were the Spanish Pegaso and SCCA Trans-Am racing greats from the early days of this much missed and magnificent racing series.  Something like 40% of the entire Pegaso production was on hand at Amelia, including several one-offs.  And everyone loved the rumbling, barking Trans-Am cars. 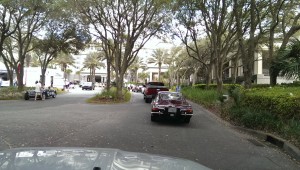 This is the driveway leading up to the Ritz the day before the show, notice the tasty Lamborghini 400gt 2+2 just in front of me, and the Allard J2x just to the left of the frame. 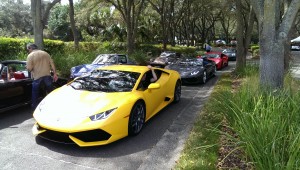 Lamborghini, Porsche, Bentley, Mercedes-Benz AMG and others host ride and drive program based at the Ritz front drive, so you can sign up and take a drive in your dream machine. No salesmen to heckle you, no charge to enter.

Part of what makes Amelia so fabulous is the venue; home base is a Ritz-Carlton on the beach, with a country club attached.  I want to live there. 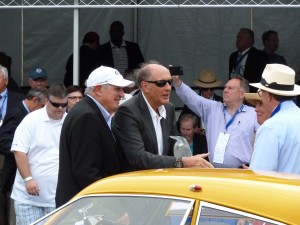 Amelia each year honors a motorsport legend, and this year’s was a great one: Hans-Joachim Stuck is one of the world’s great sports car racers, with many many wins under his belt, at the Nurburgring, Le Mans, Sebring, you name a big game sports car or endurance race, and Stuck has been there, won that.  Born in Garmisch the affable German clearly enjoyed himself, telling lots of great stories, shaking hands, posing for selfies, and signing countless autographs, Stuck (prounced more like Schtook, than stuck) is known for his lighthearted personality and penchant for practical joking when he was a driver.  He enjoyed a 40 year career, and by any measure is among the best.  He took a brief shot at Formula 1 but never got much traction there, instead acknowledging that sports cars were his think, and making the majority of his career there, primarily in BMWs and big banger Porsches.  His father, Hans Stuck, was also a driver of considerable note, as an grand prix and top speed record pilot in the pre-WWII silver arrow days of Mercedes-Benz and Auto Union record racing.

I won’t take you car by car or class by class but here are some photos I thought you might enjoy.

And if you can be in Florida next March, you must visit; here’s thh scoop: www.ameliaislandconcours.com 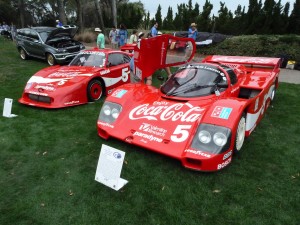 Every year the show rounds up a selection of the motorsport honoree’s most notable racing cars, and here are the two “Coke Machines” Porsches that Stuck shared with the late, great Bob Akin 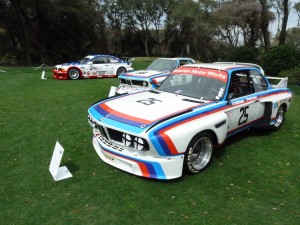 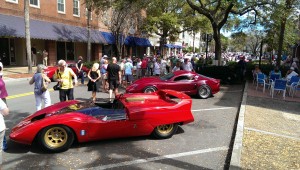 Another great Amelia event is the concours motoring tour which allows the show cars the chance to tour the island, and at mid-day on Friday the whole event parks up in downtown Fernandina Beach, which you can think of as Amelia Island’s Carmel, sans ‘tude. But packing lots of ‘tude is the one of a kind Peter Brock designed deTomaso 70P racer, resemblant of Can-Am cars soon to follow. 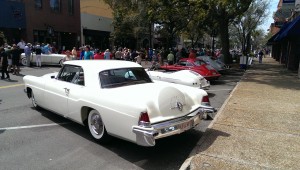 Another look as the rolling concours takes over Fernandina Beach on Friday. The Continental Mk II still gets my vote as the most elegant American car of the 50s. 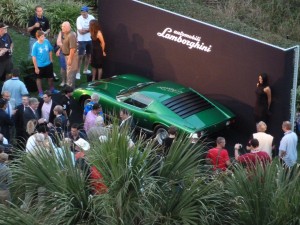 Lamborghini was celebrating big the 50th anniversary of the birth of the Miura, the world’s original supercar. This is the car that wowed the crowd at the Geneva auto show in 1966. And it still wows today. 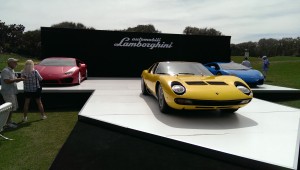 More Miura magic? Yes, why not! 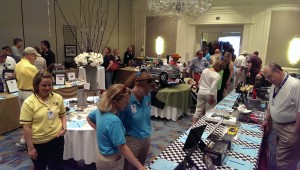 Not to be missed is Amelia’s spectacular silent auction, its beautifully curated and displayed, why not buy the goodies you want anyway, with all the money going to local charities supported by the concours. 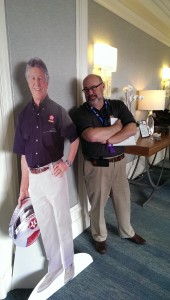 The showrooms are filled with tons of automobilia items for sale, so glad to see my hero and friend Marion Andretti here, even if he looked a little stiff in cardboard cutout form today. Never knew he was so much taller than me. 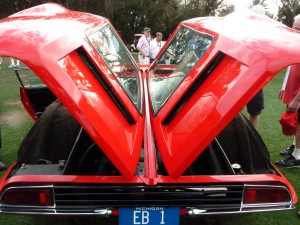 Who doesn’t love gullwinged cars, but in this case the winged doors allow access to the engine not the passenger compartment. It is of course a Giugiaro designed, Ghia-bodied deTomaso Mangusta from the late 1960s. One of the great exotic car designs ever. Period ever. 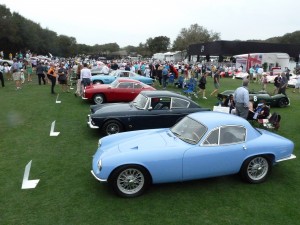 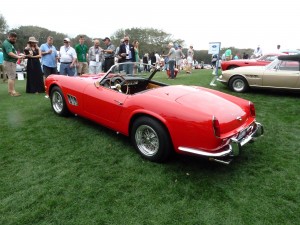 …and along came a Spider, as in Ferrari 250 GT short wheelbase Spider California, that is. 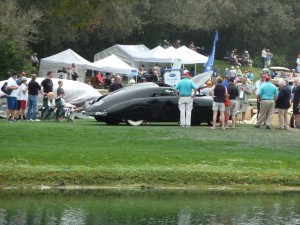 Something Wicked This Way Comes — If Darth Vader drove a car, it would be the one and only Phantom Corsair. Its an interesting story, Google it up and you’ll enjoy it I think. 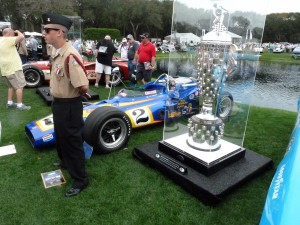 Without question one of the most innovate, creative and dazzling concours classes every anywere was this year’s gathering of iconi racing trophies from around the world, each displayed with a car that has won that race. This is the Indy 500’s pure silver Borg Warner trophy, along with Al Unser Sr’s 1970 winning Parnelli Jones Colt.